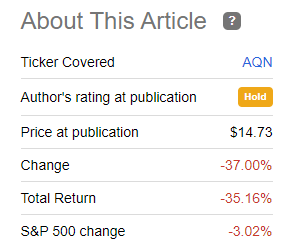 When we last talked about Algonquin Power & Utilities Corporation (NYSE:AQN), we were ready to say goodbye to this stock as the risks were just getting too high for our tastes. Our job is always to manage risk and we warn you to do the same.

So AQN is paying you to be involved here but it comes at the cost of dangerously high debt and payout ratios. At this point, considering the dangers we see for the utility sector, and for high yield in general, we are downgrading this to a hold/neutral. We currently own the stock, but have in-the-money calls sold against it. We expect the stock to be called away, barring a decent decline.

Fortunately, our positions were called away on the next expiration and we dodged this.

32% underperformance from a utility is about as painful it can get. We look at what drove it down and why it has also impacted Atlantica Sustainable Infrastructure plc (NASDAQ:AY).

AQN’s results were weak for Q3-2022. While revenues came in strong, as was expected for a company that has been building and buying everything possible, adjusted EBITDA and adjusted net earnings missed the mark.

That Non-GAAP earnings led to a Non-GAAP 11 cent earnings per share. That missed estimates by about 5-6 cents. AQN lowered guidance for the full year as well.

In light of challenging macroeconomic conditions (including higher interest rates and inflation), delays in the construction and completion of certain of the Company’s renewable energy projects, and anticipated delays in connection with certain rate decisions, among other factors, the Company is updating its previously disclosed Adjusted Net Earnings per common share estimate for the 2022 fiscal year from a range of $0.72-$0.77 to a range of $0.66-$0.69.

Is This Really That Bad?

AQN was trending lower even before the news and surely a 10% drop in earnings does not warrant such a huge reaction. That may be true in theory but does not work in practice when the company in question is carrying such massive leverage. By massive we mean that net debt to EBITDA is now over 8X. Yes, a lot of this debt is project level debt and ring-fenced. Nonetheless, this is the kind of leverage that leaves no room for error and this is what made us exit. Next year’s number had a widespread expectation of 81 cents in earnings and a 7.5X debt to EBITDA exit multiple. We can likely kiss both those goodbye and leverage is likely to remain at or above 8X.

As bad as the lowered guidance was, AQN still has an incredibly ambitious plan that no company with this level of relative debt should have.

$12.4 billion of capital will be next to impossible to do if market conditions remain where they are. AQN needs to immediately reassess and cut back drastically where feasible. Until they do that, AQN is going to be in troubled waters.

AQN has a great long-term record, but it is about to end.

Even earlier in the year when we had a bullish bias, we noted that AQN would have to slow down dividend growth if it wanted to fund all these projects.

Yes, AQN did achieve spectacular dividend growth in the past, but at this point with interest rates moving up and an aggressive growth plan ahead, we think AQN will retain a lot more of its hard-earned capital. Net Debt to EBITDA which includes a lot of project specific and non-recourse debt is still near the 7.5X mark. Expect an emphasis to bring this down over time and that will likely require less growth in dividends.

At this point, the best-case outcome is a complete standstill in dividends and slashing the projects instead. If AQN continues to “deploy capital”, it will have to cut the dividend in 2023.

The dividend is now on the clock and AQN has a “High” level of danger of a dividend cut on our proprietary Kenny Loggins Scale.

This rating signifies a 33-50% probability of a dividend cut in the next 12 months.

What Does This Have To Do With AY?

AY did drop today but one could be excused for thinking that as random noise in light of the crazy market action. It was also mild compared to a drop in AQN.

But there is more to the story here. AQN owns 43% of AY. This stake works out to be about $1.4 billion or about $2.20 per AQN share. That is a pretty large figure in context of the current AQN share price.

There is likely some fear that AQN could sell some AY stake if it cannot access the capital markets. While we agree with the idea that capital market access could be difficult in the months ahead, we don’t think AQN will sell any AY stake at this point. AY has prime assets that are performing better than AQN as a whole and its dividends are crucial for AQN. AY also runs a lower leverage than AQN, so getting rid of that portion will not help unless they are planning a complete sale of the company.

There might also be fear that AQN won’t be able to help AY grow any more as it won’t be able to sponsor equity in AY. That fear is actually well founded. AQN will have its hands full trying to save itself.

As a bruised utility that has got its investors used to big dividend raises, AQN is now in trouble. While it has liquidity for the foreseeable future, we see requirements of $2.0 billion in capex in 2023, versus operating cash flow of under $1.2 billion. So, there is an $800 million cash flow deficit before dividends. That is going to be a big hole to plug unless the central banks reverse course and invite everyone to another QE infinity party.

We would stay out, even here, on this drop.

What would make us bullish is a complete revamp of the capital expenditure timeline and reduction by 40%-70%. Throw that growth story out of the window and we might get interested.

Investors looking for solace in the AQNU units certainly did not find it.

Why would they? These are identical securities for practical purposes as there is a mandatory convertible clause inserted into AQNU. Yes, at times in the past it appeared that AQNU was giving you a better deal but the total return was about the same based on conversion values.

The stock purchase settlement rate will be 2.7778 shares per unit if the then current market price is equal to or greater than $18.00 and 3.3333 shares per unit if the market price is equal to or less than $15.00. For market prices between those values the settlement rate will be $50 divided by the market value. Prior to the IPO of this security, the last reported sale price of the common stock on 06/15/2021 was $16.08 per share. The stock purchase contract may be settled any time at the holder’s option and the company will deliver 2.7778 shares of common stock for each purchase contract.

You can actually see this even today. For the AQNU units at $32.95 you will ultimately receive 3.3333 shares of AQN at $9.30. So you get $30.66 of AQN via 1 unit of AQNU. The difference? Bulk of it is the dividend differential between now and conversion date of April 2024. Of course, you have to factor in the time value (getting more now versus later), and the probability of AQN taking an axe to its dividend. AQNU will continue paying the original amount, but come April 2024, you are not getting $50, you are getting 3.333 shares of AQN.

We never went for AQNU as it was poor security and AQN was preferable even when we had a bullish stance. The higher upfront yield on AQNU could be dwarfed by using a covered call strategy on AQN (which is what we did). The same covered call also provided a wider margin of safety, which is why we did not land up with the stock. At present AQNU is also an avoid for us.

AY is actually the best of three securities here and is close to a buy point for us. AY trades at 14X cash available for distribution and carries lower leverage than AQN. Its Q3-2022 results were weak, but still better than what AQN reported. CAFD was still up 3% year over year, and it has far more discretion over its capex than AQN.

We still think even AY struggles to get any growth traction as with cost escalation and higher interest rates, things look difficult for the company. Nonetheless, the valuation is modestly attractive, and we would look to buy under $24.00 per share.

Please note that this is not financial advice. It may seem like it, sound like it, but surprisingly, it is not. Investors are expected to do their own due diligence and consult with a professional who knows their objectives and constraints.