Alphabet Vs. Meta: Which Stock Has More Upside In 2023? (NASDAQ:GOOG) 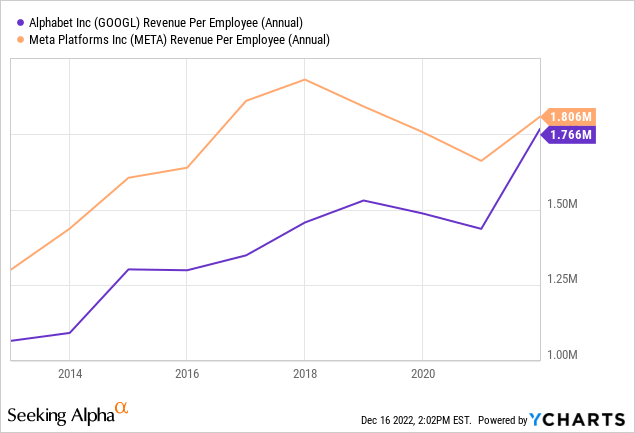 Alphabet (NASDAQ:GOOGL)(NASDAQ:GOOG) and Meta (NASDAQ:META) are two tech giants that have come under pressure from macro headwinds in 2022.

The combination of rising interest rates and a slowing economy has slowed the pace of growth in the digital ad market. This is because ad spending is highly cyclical – it is one the first things companies cut back on in times of economic distress.

Covid-19 has made things more unpredictable though, as ad spending in recent years has been lumpy – reflecting the stop-and-start pacing of the pandemic economy – and this has created tough comparables for recent quarters.

But as the health crisis has eased, consumer spending patterns and behavior have been gradually returning to normal. People are spending less time on their digital devices as they did during the height of the pandemic, and so advertisers have cut back on their digital marketing ambitions. Looking ahead to 2023, the lack of large-scale events such as the Olympics, the soccer World Cup and US midterm elections could create further headwinds.

A strong dollar has only made things harder, by lowering the value of foreign revenues in dollar terms. This headwind may be over soon though as the strength of the dollar appears to have already peaked.

In the three months to September 30, 2022, Meta saw the average price per ad decline by 18% from the third quarter last year. This offset a 17% increase in ad impressions, which was partly driven by an increase in the number of daily active users.

Volatility in the short-term is to be expected, but longer-term fundamentals remain attractive. The long-term outlook for digital ad spending remains broadly intact as the e-commerce market continues to grow and brands seek more innovative solutions to reach their audiences.

There are micro factors at play too. Recent revenue weakness has been partly down to the introduction of Apple’s App Tracking Transparency framework last year. This greatly restricted how app developers were able to access Apple’s Identifier for Advertisers (IDFA) – a unique identifier for Apple’s iOS devices that had been widely used to target and measure the effectiveness of advertising on a user level.

As expected, a large number of iOS users have chosen to opt-out of this tracking due to their concerns over their data privacy. This, in turn, has made it harder for advertisers to collect data – such as a user’s recent interests, measure advertising effectiveness and show personalized ads. And as app-based ads become less effective, returns for advertisers have fallen, and so too has the price paid per ad impression on apps such as Facebook, Instagram and WhatsApp.

Alphabet has lost out from these changes too. iOS users access the company’s apps such as YouTube and Gmail in much the same way they do with other apps, so it faces the same problem there.

Importantly, however, it isn’t having the same impact on search – Alphabet’s main moneymaker. Ads that appear on Google search results, along with other web pages that utilize Google’s search engine, are not significantly affected by Apple’s latest privacy changes, since search ads are primarily targeted via keyword contextual matching – as opposed to direct interest-based targeting used by most apps.

Meanwhile, Google has proposed its own Privacy Sandbox initiative with the stated aim of enhancing privacy on the web. It intends to phase out support for third-party cookies in its Chrome browser and the use of Google’s Advertising ID on Android – the equivalent of Apple’s IDFA, which will undermine how advertisers currently show relevant ads, collect user insights and measure ad effectiveness.

The Privacy Sandbox intends to maximize ad relevance by introducing “privacy-preserving APIs” such as the Topics API, FLEDGE API, and the Attribution Reporting API to replace the current use of cookies and Advertising ID. By doing so, it would still be possible to show interest-based advertising, monitor consumer trends and behavior and measure ad effectiveness.

The big change will be that targeting in future will take place on the user’s device, with on-device processing designed to keep user data private. Algorithms will analyze a users’ activity within their own devices, without revealing their entire browsing history to advertisers.

As such, Google’s proposed privacy changes seem to be both privacy-enhancing and revenue-preserving, as opposed to Apple’s ATT. And that’s not at all surprising given how Alphabet is itself heavily reliant on ad revenues.

Google’s Privacy Sandbox is not without its critics though – antitrust complaints have been made on both sides of the Atlantic. Advertisers and publishers in both the US and EU have criticized the proposed changes for being potentially anti-competitive – as it would limit their access to user data, while not doing the same for Google’s own search business. Others have also questioned whether the solution actually affords users with much greater privacy, given that information about a user’s interests could theoretically be used to gather sensitive information.

Elsewhere, competition for both companies cannot be underestimated. Alphabet and Meta dominate the online ad market, but they are under pressure to continually grow their reach and time spent on their platforms.

Facebook’s struggles to stay relevant among younger users have been well documented – as an aging user base puts at risk its ability to grow. Generation Alpha and Gen Z – or those born after the mid-1990s – spend far less time on Facebook than previous generations, and are instead attracted to a growing cohort of younger social media and messaging networks – including TikTok, Snapchat and Discord, as well as Meta’s own Instagram and WhatsApp. As the spending power of this younger generation grows, brands (and their ad dollars) will follow them wherever.

Alphabet’s YouTube is facing intense competition too – and from two fronts. Firstly, from the likes of TikTok in the short video space, which have been doing particularly well at attracting younger users. The company is fighting back, with the development of YouTube Shorts – its own short-form video-sharing platform. The short-form video space is crowded though – Meta has big hopes that its Reels feature on Instagram will capture more market share too, while at the same time, monetization remains a challenge.

Secondly, YouTube also faces competition for ad dollars from the likes of Netflix, Disney+ and other streaming services. SVOD platforms, which have historically relied on subscription revenue, have been launching more ad-supported subscription tiers to their offerings, as consumers facing growing cost of living pressures seek lower subscription prices.

The squeeze is already being felt on YouTube’s top-line. The video platform’s ad revenue fell 2% from a year ago, to $7.07 billion in Q3 2022 – the first decline since the group reported YouTube’s own share of revenues nearly three years ago.

The Google search business is more resilient though, demonstrating its wider moat. Google’s dominant position in search is such that its name is synonymous with the action to search for something using the internet. There are no significant signs of its dominance weakening, with Google handling 92% of all search queries worldwide in November 2022. Google Search saw revenue grow 5% year-on-year to $39.54 billion in Q3 2022 – 57% of Alphabet’s total revenues.

Alphabet’s cloud business is another bright spot. Against a wider tech slowdown, demand for enterprise cloud services is expected to hold up well. With the ongoing digital transformation, companies are migrating more and more of their workloads to the cloud, in a bid to become more agile, resilient, and efficient.

Google Cloud is the third-largest cloud provider, behind just Amazon Web Services (AWS) and Microsoft Azure. But Google Cloud is growing faster than both of its bigger competitors, with a 38% revenue growth rate over the past year. Google Cloud is not yet profitable though – the division made a loss of $699 million in Q3 2022.

Meanwhile, Meta is looking at opportunities in the metaverse, including virtual reality (VR) and augmented reality (AR). Reality Labs, a corporate successor to Meta’s Oculus brand, recently announced the launch of the Meta Quest Pro – a mixed reality headset that can blend virtual objects into the physical environment, as well as deliver a fully virtual experience.

VR and AR have many potential applications, including productivity, socializing and gaming, but there are still huge challenges to overcome before they will really catch on – including cost, portability issues, limited field of view, safety concerns and quality of experience.

Both Alphabet and Meta are under pressure to cut costs. The pressure is more acute at Meta, which underwent a particularly big recruiting spree during the height of the pandemic.

Meta has nearly doubled its employee count over the past three years, with a 94% increase in its headcount to over 87,000, compared to 57% growth at Alphabet, to more than 186,000. Interestingly, however, Meta maintained a lead over Alphabet in terms of revenue per employee. That lead has narrowed substantially over the past two years though – and given current revenue trends, Meta may even find itself falling behind Alphabet on this metric by the end of this year.

Meta appeared to have tried to grow too quickly and failed to anticipate a more challenging macro backdrop. And in a belated realization of this, it recently announced plans to layoff 11,000 employees – representing 13% of its workforce.

“To provide some context on the approach we are taking towards setting our 2023 budget, we are making significant changes across the board to operate more efficiently. We are holding some teams flat in terms of headcount, shrinking others and investing headcount growth only in our highest priorities. As a result, we expect headcount at the end of 2023 will be approximately in-line with third quarter 2022 levels.”

As part of a broader tech selloff, valuation multiples for both stocks have fallen significantly this year. Alphabet now trades at 18.9 times its expected 2022 earnings, while Meta is valued at just 13.2 times.

Meta’s lower multiples, however, come at the cost of slower growth. Meta’s revenues plateaued earlier this year, and are currently falling. On the other hand, while Alphabet’s revenue growth has slowed, it remains decisively positive.

While the macro headwinds affect both companies to a similar extent, I think Alphabet is more attractive because of its more favorable micro environment. The group’s overall revenue outlook is in better shape, as it has exposure to the fast growing cloud market and given the greater resilience of Google’s search business. Alphabet’s valuation multiples may be a bit higher than Meta’s, but quality and growth always come at a price.