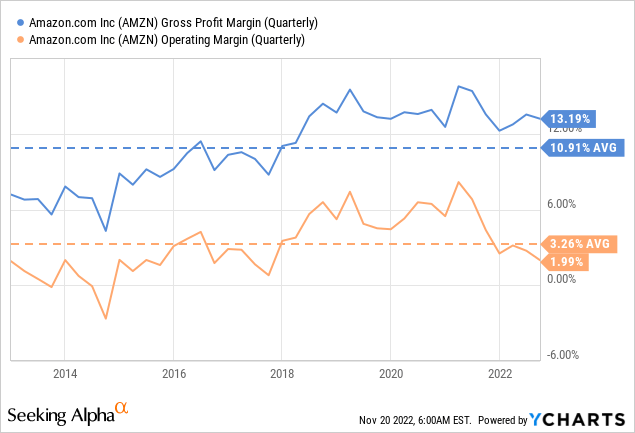 While Amazon (NASDAQ:AMZN) continues to be an impressive company that has delivered outstanding results for its investors, we are seeing increasing signs that its fundamentals are deteriorating. For example, Amazon reported disappointing third quarter results and gave soft fourth quarter guidance. For the third quarter, worldwide net sales were $127.1 billion, representing an increase of 19% y/y, and the company reported $2.5 billion in operating income. Regarding guidance, for the fourth quarter net sales are expected to be between $140.0 billion and $148.0 billion, or to grow between 2% and 8% compared with fourth quarter 2021. This level of growth no longer justifies an inflated valuation, especially given the relatively poor profitability. Shareholders are also getting diluted by the significant stock-based compensation which was $5.6 billion in Q3, up from $5.2 billion in the second quarter.

Not only are the financials deteriorating, but we believe the customer experience is moving in the wrong direction as well. It now feels like everything on Amazon has become an ad with advertising everywhere on the site.

Third-party sellers have proliferated and now represent 58% of total paid units sold in Q3, the highest percentage ever. Unfortunately the company has less control on the quality of the products when these are sold by third parties compared to products sold directly by Amazon. With many results returning “Sponsored” products, it is getting more difficult for customers to know if they are being shown a product because it is actually a good option, or because there is a third-party seller purchasing an ad. Sellers, having to pay now substantial sums to advertise on Amazon are now raising the prices to compensate for the increased cost to do business, also deteriorating the customer experience and making Amazon a less competitive shopping destination.

Free cash flow generation has always been Amazon’s focus in the past, but it went negative last year and likely will this year as well. Capital expenditures are a big reason this happened as the company doubled the size of its network in the last two years. Fortunately, the company is now becoming more disciplined with its capex. The operating margin has deteriorated in a very meaningful way the last few quarters. In fact, it is now below the ten year average for the company, basically erasing the operating leverage gains the company had made in previous years.

The company stated some additional factors affecting profitability include the step-up in Prime Video content and marketing costs. Clear examples include the global premiere of the Rings of Power and the launch of the NFL Thursday Night Football package in the US. More important headwinds include inflation, excessive capital expenditures, supply chain issues, and probably the biggest factor being less than expected demand. The end result is that for the trailing twelve months net income came in at just over $11 billion.

The revenue graph for Amazon is impressive, however growth is starting to decelerate. For comparison, Amazon’s revenue is approaching Walmart’s (WMT) $600 billion in trailing twelve months revenue. Once companies become that big it is incredibly hard to maintain high growth rates.

We know Amazon benefited greatly from the pandemic boost to e-commerce, but with the reopening of the economy Amazon’s growth rate declined significantly. Amazon has therefore two big problems, declining profitability and a decelerating growth rate.

The reason we are not more bearish on Amazon is that its AWS business continues to deliver excellent results, even if growth is somewhat decelerating too. In the third quarter AWS net sales increased to $20.5 billion, up 27% y/y and now representing an annualized sales run rate of $82 billion. Amazon reported that due to macroeconomic uncertainties they have seen an uptick in AWS customers focusing on controlling costs. AWS has therefore been working with customers to lower their bills. One example is the Graviton3 processors which the company claims deliver 40% better price performance than comparable x86-based instances. This means that AWS will increasingly be displacing chips from the likes of Intel (INTC) and NVIDIA (NVDA).

Another headwind AWS is facing is that of higher energy costs, which is pushing AWS to look for ways to optimize their operations to use less energy. Still, the company remains solidly profitable, posting an operating profit of $5.4 billion in Q3 2022.

Amazon has plenty of liquidity, but also very significant long-term debt. Investors should watch the balance sheet closely, as it could quickly deteriorate given that the company currently has negative free cash flow.

Leverage appears reasonable at a ~1x financial debt to EBITDA, but we would feel a lot better about the company if it had a significant net cash position. Recently cash and short term investments have been decreasing, while long-term debt has been increasing.

The valuation looks attractive at first sight, with valuation multiples such as EV/Revenues significantly below the ten year average. We would urge caution, however, as fundamentals are deteriorating, and we don’t believe the next ten years will bring anything close to the growth that Amazon delivered in the previous decade.

The EV/EBITDA ratio does not look too expensive either, and is also well below the ten year average. The problem we have is that profitability is currently decreasing and growth is decelerating. Taking that into consideration an ~18x multiple no longer looks that cheap.

The main risk we currently see for Amazon investors is that fundamentals are deteriorating. It remains to be seen if the company can turn around the declining profitability trend, and re-ignite high sales growth. It is becoming clear that the company over-invested in capex and that it is struggling to improve its operating margins. Further complicating things, some of its largest competitors are getting a lot smarter about e-commerce. This includes companies like Walmart (WMT) and Costco (COST).

There are many signs that fundamentals are deteriorating at Amazon, and this is reflected in declining profitability and decelerating growth. We would argue that the customer experience has gone down too, given the increase in ads on the website. While the valuation looks attractive compared to historical multiples, we would be cautious given the clear signs that fundamentals are deteriorating. The main reason we are not more bearish on the company is that AWS continues to deliver solid performance.