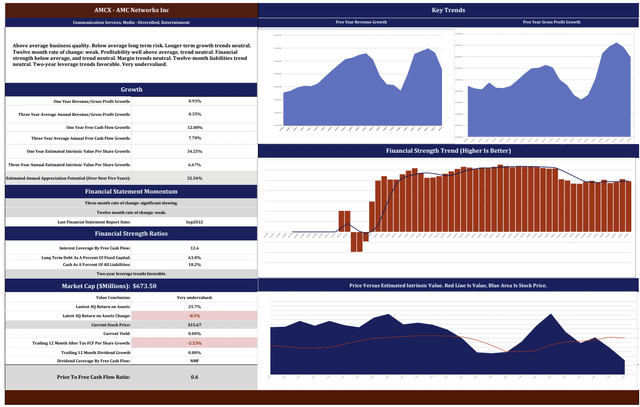 We look for companies with some combination of undeveloped potential, for instance due to mismanagement or lack of capital, and substantial value that may be realized through restructuring. Mostly we do this work for private equity clients – conduct searches for targets that meet their specific criteria. This report explores three companies with interesting characteristics to a potential acquirer, but none are currently of interest to any of our clients.

AMC Networks is marginally profitable despite having an unqualified board consisting largely of family members of the 96-year-old founder, one declining business and another that competes against Netflix in streaming. It survives largely on the strength of its content. The company’s interim CEO, and son of the founder, recently described the business this way:

“It was our belief that cord-cutting losses would be offset by gains in streaming. This has not been the case. We are primarily a content company and the mechanisms for the monetization of content are in disarray.”

The following graphs depict the company’s key financial statement trends through the first nine months of 2022.

The bottom graph summarizes our estimate of intrinsic value plotted against its five-year stock price. That estimate is at least $40 per share, assuming that the company can maintain its profitability by spending each year on content creation what it takes in through related streaming income and program rights. Actual values unlocked in a restructuring may be much higher.

AMCX’s current stock price of $17.66 compares to a low of $32 in 2011. In the four quarters ended September 30, 2022, the company reported earnings of just over $7 per share, but it spent (and capitalized) so much creating new content that actual profitability is difficult to determine. This is because expenses associated with content creation are treated as long term assets. Ultimately, the complex and arcane accounting boils down to a simple question: what portion of that spending supports long-term growth, and what portion simply replaces obsolete content and thus makes no additional contribution to ongoing profitability.

As indicated by a stock trading at two and a half times GAAP earnings, the market thinks that declared earnings are not real. AMC Networks spent, in the first nine months of 2022, $1,066 million on content creation, which was partially offset by $610 million in “Amortization of program rights.” If all the company did was replace its obsolete assets with new assets that cost $400 million more due to increased production costs, then instead of earning $272 million in the first nine months (reported GAAP earnings), the company actually lost $130 million. The only way to know for sure would be to totally stop all new content creation and watch what happens to earnings and free cash flow. I strongly suspect that if I interviewed former senior executives of the company, of which there are many (turnover is high), an accurate estimate of value could be reached. This is a time-consuming, expensive process but one we undertake frequently for clients. No client has so far indicated an interest in researching AMCX’s value to that degree.

There are, however, a couple of further clues to actual profitability. In the first nine months of 2022, the company’s common shareholders’ equity increased by about $100 million, or $2.50 a share. The company does not pay a dividend, so that $100 million increase in book value is technically speaking the shareholders’ total return. In that nine-month period, cash on hand declined by $100 million due to a reduction in payables of $100 million. When management stock options of $48 million are figured in, the company’s public shareholders are sharing thin gruel indeed. In late November, the company fired its CEO, who was in place for only three months, and announced that it would layoff twenty percent of its employees.

While there is a significant question as to the company’s profitability, there is no doubt that the company’s content is a valuable long-term asset. Programs like Interview With The Vampire, Breaking Bad and Better Call Saul will generate a long-term revenue or royalty stream for the company. It should be noted that AMC Networks doesn’t own all of the content it distributes. Mad Men is owned by Lionsgate and Breaking Bad is owned by Sony, for instance. It does own The Walking Dead and the rights to fourteen of Anne Rice’s novels, including the Vampire Chronicles series and her Lives of the Mayfair Witches. At a 50% premium to the current market price, Netflix could buy the entire company for 5% of its current annual content creation budget of $18 billion.

Much boils down to the issue of whether or not the company is pursuing a valid business model, and how much its content assets would be worth following a different model. Does the company have the flexible, entrepreneurial mindset necessary to compete and thrive in a highly creative, evolving, competitive marketplace given that the company’s controlling shareholder is 96 years old, and eight of twelve board members are close relatives of founder Charles Dolan. He controls 39% of the stock. Other family members control another 40%.

From the Company’s April 2022 Proxy Statement:

Our approach emphasizes long-term stock market trading values as opposed to value in an acquisition, or in a liquidation. As mentioned above, we do undertake acquisition value assessments for clients, but have not yet done that in the case of this company.

To reach an estimated market value, we compare five long-term ratios of value including revenue per share, free cash flow per share, GAAP earnings, and dividend yield (where applicable) to determine which standard has been most accurate in predicting future stock prices, and we then apply that standard to the current stock price. In the case of AMCX, the measure most predictive is P/E ratio, which suggests a value of $40 per share, as indicated in the bottom graph below.

The following graph focuses in on value over the last five years.

Both graphs indicate that when the stock has traded below our estimate of market value, it has subsequently generated high returns to patient value investors.

AMC Networks brings to mind the scenario at the Wall Street Journal before its acquisition by Rupert Murdock. Murdock had access to information on the motivations of key Bancroft family shareholders and was ultimately able to use that insight to acquire the publication. The combination here of dysfunctional business model, aging controlling shareholder, a board not qualified to run or guide any public company let alone one facing the challenges of AMC Networks, and substantial asset values will sooner or later lead to major change.

HNI is trading at the same price as it was in July of 1997. Insiders own 2.8% of the company’s stock. SG&A accounts for 85% of gross profit, or $178.2 million in the three months ended October 1, 2022. In the year ended December 31, 2021, the CEO, Jeffrey Lorenger (aged 57), received total compensation of $9.1 million. The company generated total free cash flow that year of $15.6 million. The nine non-executive directors are each paid about $200,000 for their service. That’s way too much, in my opinion, for underperformance.

The company’s divisions are autonomous, providing an opportunity for an acquirer to sell one division and thus offset most or all of the purchase price. The company owns substantial real estate which has been written down over the years in depreciation.

The company generates about $75 million in annual operating (pre-tax, pre-interest) operating free cash flow. Free cash flow is at roughly the same level as it was in 2006. In the interim it went through an erratic decline of about 50%. I estimate the stock market value of the company is around $38 per share at its current level of profitability (versus the current stock price of $28). To reach this value, six different approaches were taken, and the approach that has been most predictive of future stock price identified. In this case that is revenue per share.

While our preliminary analysis indicates that current values make sense for an acquirer, as a passive investment, we rate the stock a buy under $23.45 and a sell over $45.88. The stock currently trades at $30.68.

The value in a restructuring could be substantially more based on the company’s real estate value and the potential to sell off one division.

The company has put in place lavish senior executive compensation in the event of a change in control, which is defined, among other scenarios, as the purchase of more than 20% of the stock by a third party. The CEO, for instance, would receive $17 million.

The stock yields 4.5%, which is covered by free cash flow 1.9 times. The annual dividend has increased by 3% a year, on average, over the last five years.

This company, which has been in business since 1906, owns substantial real estate assets including seven deep-sea ports. Insiders own 6.1% of the stock.

Long term financial statement trends indicate a company that some years makes money, some years loses money, and overall goes nowhere. This is of course reflected in the stock price which has also gone nowhere.

While recent trends do show improvement, this is likely another cyclical peak.

Tamara Lundgren, CEO, (65 years of age) has been CEO since 2008. She was previously a managing director in investment banking at JP Morgan Chase, and before that at Deutsche Bank. Prior to that she was a lawyer. She is currently the chair of the Board of Directors of the Federal Reserve Bank of San Francisco. In 2022 her total compensation will be $7.2 million; in 2021 it was $10.1 million.

Rate of change is weakening, also supporting the view that this may be a cyclical peak for the company.

Both margins and asset turnover are weak.

Giving no consideration to the current value of the company’s real estate assets, including its deep-sea ports, but basing value solely on long term average free cash flow and financial statement trends, we find the company’s intrinsic value is somewhere around $43 a share (versus the current market value of $31).

Assets which have been owned for decades and likely written off undoubtedly would add to this, but it would take more research to accurately estimate.

The stock currently yields 2.2%, which is covered by free cash flow 2.5 times. The dividend has not grown in 5 years.

While our preliminary analysis indicates that current values make sense for an acquirer, as a passive investment, we rate the stock a buy under $20.38 and a sell over $59.24. The stock currently trades at $34.72.

We view these 3 diverse companies as potential acquisition candidates.

To access the detailed financial analysis on any company you’d like to explore further, click on the company ticker/company name in the top left of any Summary Report.