As Recession Fears Loom, These Retailers’ Dividends Are Well-Covered 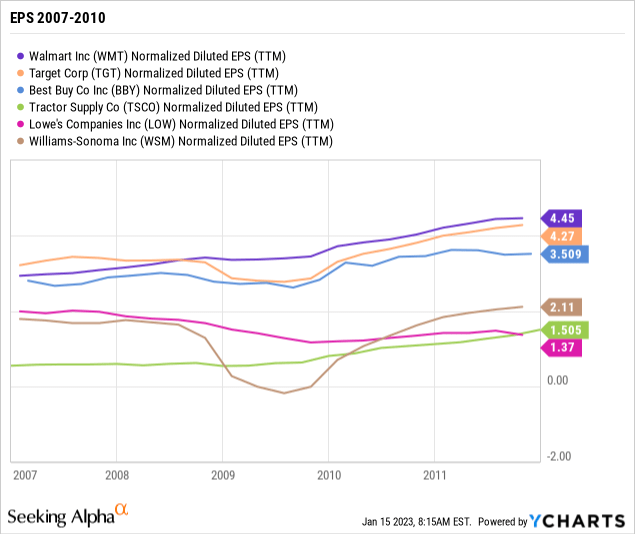 The prices of many consumer retailers bottomed out in the summer of 2022 and have bounced solidly since. Is this warranted? Assuming we are coming into a recession, it would be prudent to look at how some of these companies fared during the Global Financial Crisis (GFC) of 2008-2009.

As a dividend growth investor, I am primarily interested in the retailers that survived the GFC without cutting dividends. This time frame is particularly useful to compare to, as it is unlikely we will see a recession nearly as deep, although no two recessions are the same. Specifically, I will look at the following:

Tractor Supply Company (TSCO) – No dividend at the time

Home Depot (HD) was left off the list as it performed similarly to Lowe’s, although it did freeze its dividend. While Home Depot’s earnings results were similar to Lowe’s, its operating cash flow took a much larger hit. In hindsight, it appears that HD could have raised the dividend easily; however, given the unknowns at the time, freezing the distribution was a prudent decision.

Right now, analysts are either not expecting a recession or projecting a very mild one at most. In fact, analysts still expect earnings growth for TSCO, Lowe’s, and Home Depot in each of the next three years. At the same time, it appears that for a few companies, the projected negative earnings are primarily due to inventory-related issues.

The table below shows each company’s projected EPS growth by year for 2023-2025.

By comparison, today’s earnings estimates look pretty robust compared with the actual results from the GFC era. The table and chart below show how each company’s earnings changed annually from 2007-2010.

Looking at the current estimates versus the GFC actuals, it seems that analysts likely believe we will miss a recession altogether. During the year’s first half, we will likely see companies reducing and pulling more guidance as the consumer weakens, with analyst earnings forecasts falling shortly after. I expect much of the optimism around these retailers to disappear, except for Walmart. Walmart, with its grocery business, will do ok in any environment.

Of course, any dividend growth investor should be concerned about a company’s dividend safety as we enter a recession. Assuming a GFC-style recession is a worst-case scenario, we can compare the payout ratios entering the GFC versus where they are today to see where a company is standing. The table below shows this data and the peak payout ratio.

Since companies pay dividends out of cash, looking at the operating cash flow payout ratios is also worthwhile. This is shown below.

Combining everything above, here are some observations and thoughts on each company as we likely enter a recession.

Walmart is the best positioned of all these companies. In addition to its grocery business, consumers will switch to lower-priced products in their stores. While higher than entering the GFC, the payout ratio is not a concern as the company is unlikely to see significantly reduced earnings.

Based on the company’s performance in the GFC, Target is unlikely to see a significant or prolonged decline in earnings. It may take longer to work through the inventory issues than previously thought, but this will not endanger the dividend.

At its last earnings, WSM pulled its forward guidance, but I doubt it will be the last one of these retailers to do so. The earnings from the GFC are challenging to interpret, but it is clear they had three years of negative earnings on the leading edge of the recession, with a strong recovery on the back. As of right now, analysts show WSM’s earnings growth rate falling off a cliff over the next three years, which is expected given the boom in the last couple of years. Nevertheless, WSM’s dividend is in a strong position.

WSM is the only company with lower payout ratios than it had entering the GFC. It is unlikely that the coming recession will be as bad as the 2008-2009 one, during which WSM’s dividend survived. Williams-Sonoma will easily come through the next downturn with its dividend growth streak intact.

The one caveat with WSM is the massive earnings growth since the pandemic, at 87% in 2021 and 64% in 2022. Was this just a post-pandemic boom? Before the pandemic, growth was about 10% per year. A fallback to the previous trajectory would entail much more significant earnings cuts than are projected today.

Lowe’s was the hardest-hit retailer discussed here during the GFC. Of course, this was during a significant real estate crash. It’s worth noting that Home Depot’s results at the time mirrored those of Lowe’s. Before beginning a recovery in 2011, Both companies’ earnings declined by a total of around 40%.

Construction tends to have longer lead times, and budgets can be allocated years in advance. Cuts that occur in a recession tend to show up later. While this lag is seen more in heavy construction, it impacted both Lowe’s and Home Depot as well. Earnings didn’t begin a recovery until 2011, well after the other retailers. This delayed recovery could be expected again depending on the housing market.

Today, Lowe’s and Home Depot pay a significantly higher portion of earnings as dividends than they did in 2008. Lowe’s is in a much better position than HD from a cash payout perspective and has always been more conservative with payout ratios. However, unless we see a major housing market crash like in 2008, both dividends are safe. Lowe’s is the safer of the two, given its much lower cash payout ratios.

Of all the retailers discussed here, Best Buy is the least liked at this time. And, looking at the massive jump in payout ratios from the GFC to now, it appears warranted. The company easily raised dividends through 2008-2009, but it seems questionable how well they could weather a significant downturn today. Of course, the question is if they would see a significant downturn.

Best Buy was undoubtedly a massive beneficiary of the stay-at-home movement from the pandemic. The question remains if everyone is happy with their devices and would take a break from replacements or new ones if we see a recession. This wasn’t the case in the GFC period, as Best Buy grew earnings during the recession.

Of course, it’s only been since the GFC we have seen the rise of Amazon (AMZN); perhaps the business has changed enough that Best Buy will be a loser in the next recession. Best Buy has done a good job adapting its business model, but it is hard to judge as the pandemic skewed everything upwards for them.

Best Buy has the most at-risk dividend. They will likely be able to maintain and raise the distribution through a recession, but there is a significant (20-30%) chance they won’t. Investors looking to jump into BBY for the dividend should look for a wide margin of safety in a much higher-than-normal starting yield.

Tractor Supply Company has established an almost cult-like following amongst its customers. While it’s considered a specialty retailer, it will likely perform as strongly as Walmart in a recession. Analysts agree and are most bullish on the company.

TSCO has aggressively raised the dividend over the past decade and as a result, has seen the earnings payout ratio balloon from the low teens to over 40% today. It has one of the highest “normal” payout ratios of the companies discussed here. The dividend should be safe if dedicated customers stick around in a recession. However, given the high starting payout ratios, investors counting on continued fast dividend growth will likely be disappointed.

Except for Walmart, most of these retailers are susceptible to massive price drops in a recession. I generally use historical dividend yield, looking at the 25th, 10th, and 5th percentiles of yields as buy points. However, it becomes challenging with companies that have had massive price drops in the past. So, for this reason, I always consider the maximum yield they have ever offered before purchasing in a down market.

The table below shows my 2nd and 3rd buy points and current and historical maximum yields for reference. At this time, I am only considering the third buy-point, and for Best Buy, which is the riskiest, I am looking for at least last June’s yield of 5.3%.

It’s worth noting that many of the maximum yields were not set during the GFC. In the years around 2016, retailers were out of favor, driving Walmart and Target to record high yields. The pandemic fears led Lowe’s to its highest, while TSCO hit its high just last summer on the back of strong dividend growth. Only WSM and Home Depot were priced to go out of business during the 2008-2009 recession. So there is no guarantee a recession will bring historically great prices to these retailers.

Currently, I hold positions in TSCO, BBY, HD, and LOW. I would like to add to my holdings in Home Depot, but it has the farthest to fall before I consider adding. WSM is the most interesting company right now, as its ability to maintain low payout ratios is intriguing. WSM also has an extremely low valuation, even though it doesn’t have the yield I would like.