Bank Of America Still Has The Credentials To Outperform (NYSE:BAC) 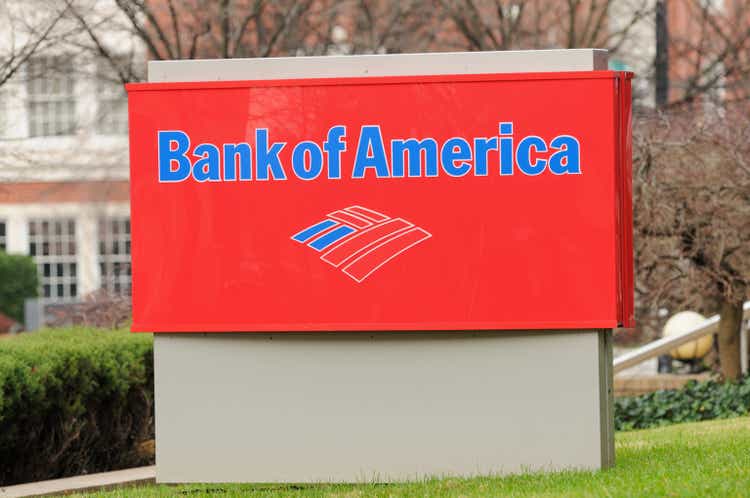 I’ve liked Bank of America (NYSE:BAC) (“B of A”) for over a year now, and while regional banks have lived up to my expectation of outperformance versus the money center banks, Bank of America has still done well on a relative basis – and “relative” is an important caveat here, as bank stocks have taken some hits this year despite the prospect of strong earnings growth in 2023. Since my last update, the shares have beaten large bank peers by about 10%, and have outperformed them by about 5% this year.

I continue to like this bank’s blended exposure to both money center banking and Main Street banking trends, including its improving performance in trading and its strong rate sensitivity. While I do think a weaker macro background for 2023 remains a threat, I believe B of A is capable of mid-single-digit long-term core earnings growth and that such growth (as well as near-term earnings and ROTCE) support a fair value in the low-to-mid-$40’s.

Still Mostly Standing Out In The Right Ways

Line-item comparisons to other banks were mixed, but generally positive. BAC was a little shy of the median on net interest income growth (24% versus 26%) and further off on net interest margin (2.06% versus 2.83%), but the company had above-average operating leverage and better pre-provision profit growth (14.5% versus 12.6%).

Deposit performance was softer than average with 1% average growth year over year (versus around 3%), and the nearly 7% qoq decline in non-interest-bearing deposits was likewise worse than normal. Still, deposit costs were up less than average (up 18bp qoq overall and 29bp qoq for interest-bearing deposits), and the deposit beta was below-average.

Looking ahead, Bank of America is still the most asset-sensitive large bank I follow, with a parallel 100bp move in rates expected to drive a roughly 8% increase in net interest income. M&T Bank (MTB) and Regions (RF) also have above-average sensitivity, but not on that scale. Better still, Bank of America’s opex/operating leverage outlook is among the best of its group, meaning that rate leverage should flow straight through to earnings in 2023.

Conditions Are Getting More Challenging, But The Tailwind Can Push Growth

There’s no question that the outlook for 2023 is getting more challenging, with the CEOs of several large industrials outright calling for a recession in 2023 and many bank CEOs talking of slowing conditions and more caution on underwriting. Even in a more challenged environment, I believe Bank of America can do better than most.

First, a little perspective. As of the most recent loan data, loans are still growing at a double-digit year-over-year rate in the U.S. (up around 12% yoy and 2.5% qoq), with double-digit growth in C&I, CRE, and card lending (the latter still growing at a high-teens rate). Residential lending, too, is still growing (up almost 10%), though I expect this to slow more significantly. Loan demand will almost certainly decelerate further, but banks are still putting higher-yielding loans on their books at a strong rate, and variable-rate loans can still adjust higher on further Fed actions.

Credit quality is normalizing. Credit card delinquencies have been accelerating pretty rapidly of late, and are now back to about 85% of pre-pandemic levels. Growth has been slowest at American Express (AXP) and highest at Discover (DFS) and Capital One (COF) (no surprises there on either side), but Bank of America has been trending closer to the latter than the former. On the other hand, NCOs across the business remain low and Bank of America really doesn’t originate subprime loans.

Expenses, too, aren’t much of a concern here. While IT spending is never ending, B of A has already put a lot in place and incremental spending needs seem low – I expect the bank to generate low-to-mid double-digit revenue growth from 2021 to 2025 on low single-digit opex growth. Few large banks offer that sort of operating leverage, and I think Bank of America will be a standout among larger banks for PPOP/EPS growth over the next few quarters.

I’d also note that the bank is investing in growth. Bank of America has been significantly increasing its commitment to trading (up $30B in Q3’22) at a time when some rivals have pulled back to preserve/build up capital. That seems to be paying dividends, as BAC’s trading revenue grew 13% yoy and 3% qoq in the third quarter – beating Citi (down 7%/down 24%), JPMorgan (up 6%/down 11%), and Goldman Sachs (GS) (up 11%/down 4%).

The biggest risks I see here now are mostly around the balance sheet. Loan growth could weaken even more than I expect in 2023/24, and BAC’s commitment to higher-quality lending would likely lead to worse growth than peers willing to be more adventurous. I suppose there’s also a theoretical risk that credit quality could worsen dramatically, but I’m not expecting a severe recession. There’s also a risk that the Fed could reverse course more quickly/sharply on rates, undercutting BAC’s asset sensitivity, but I don’t see that as particularly likely. Deposit costs, too, could be a source of downside risk, but BAC has a fairly sticky branch-based deposit franchise.

I likewise haven’t made especially meaningful changes to my ROTCE or EPS assumptions, so my ROTCE-based P/TBV and P/E-based fair values haven’t changed much either – they’re both still in the low $40’s.

I believe that Bank of America should be trading in the low-to-mid-$40s today and that the shares are priced for a double-digit annualized return. For a bank of this quality, that’s a hard return to turn up, and I particularly like the company’s operating leverage over the next 12 months. Although I do think there are some regional and community banks that offer a bigger pop, I think BAC is an appealing name in an underappreciated sector and worth a closer look.