Be Careful What You Wish For, Pivots Happen For A Reason 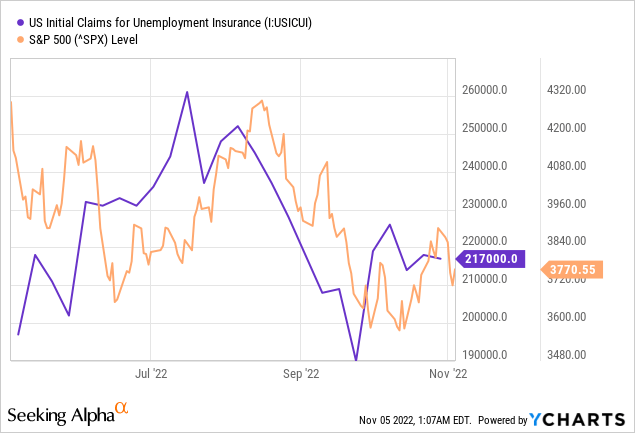 We have a ways to go.

The markets want a pause. They want a pivot. Every hint of a pivot sends the market into a frenzy. Like when markets rallied after Wall Street Journal Reporter Nick Timiraos published a piece that suggested lower rate hikes might be in store.

Equity markets are grasping for signs of the infamous pivot. Weakness in employment data is interpreted as dovish and thus bullish. That’s why the S&P has been loosely tracking initial jobless claims over the past 6 months. The world continues to be upside down where bad news is good news and vice versa. I think it’s time to get this straight.

I’ve been trying to impress upon investors that this notion of poor macroeconomic data is actually not bullish. Let me be clear: the pivot that you seek may not have the outcome you expect. Historically, pivots have not been good for equities. It could be “different this time.” But these are famous last words for a reason.

Pivots Happen For A Reason

A premature pivot can be bullish for equity markets because it restores liquidity and multiple expansion against the backdrop of an economy that has remained strong. The issue with this thinking is that for the past thirty years the Fed has not pivoted until monetary tightening has caused economic turmoil, often referred to as “something breaking.” That something could be credit markets, Forex markets, a sovereign bond market, or a multitude of other matters. The point is this: the Fed routinely waits to pivot until the manifestation of some sort of crisis forces them to act.

Chairman Jerome Powell said as much during the Q&A segment of the FOMC Meeting Press Conference, here’s what he said (bold added for emphasis):

…if we were to overtighten, we could then use our tools strongly to support the economy. Whereas, if we—if we don’t get inflation under control because we don’t tighten enough, now we’re in a situation where inflation will become entrenched. And the costs, the employment costs in particular, will be much higher, potentially. So from a risk management standpoint we want to be sure that we—that we don’t make the mistake of either failing to tighten enough, or loosening policy too soon.

This is the kind of mindset that leads to the same outcome time and time again. Going back to late 2019, signs of economic recession were appearing long before the emergence of Covid-19. The Fed began cutting the Fed Funds Rate in August 2019. The S&P 500 went on to fall 21% over the next 231 days. Granted, the Covid pandemic triggered the crash and exacerbated the reaction. However, the makings of an economic contraction was already in place as suggested by the 10Y-3M yield curve which inverted in 1H 2019.

The same thing occurred in 2007 after the Fed began cutting rates in August. The 10Y-3M curve had been inverted for a year already. Over the following year and a half the S&P declined by 52% and did not bottom until rates did.

Only a short seven years earlier did the last pivot precede equity volatility. The Fed started cutting rates in December 2000, nearly six months after the 10Y-3M curve inverted. It took two years for the S&P to bottom, nearly 40% lower when rates had almost bottomed out.

Prior to the 21st century, the record is less consistent. Some pivots, such as those in 1969, 1974, and 1981 experienced equity market declines after the first rate cut. Other periods, including 1980, 1984, 1989, and 1995 experienced little volatility following the first rate cut and markets continued higher.

Recession Is The Tell

I do believe that a recession in the U.S. is underway or impending. This significantly increases the probability that a pivot in monetary policy will have delayed effects on economic expansion and equity market valuations. History has a consistent record of experiencing declining S&P 500 earnings while the Fed Funds rate declined in response to economic recession. This is why equities underperform following the pivot; economic weakness is prolonged after the policy stance change which negatively impacts earnings.

In September, I published an article about the Fed’s policy posture and what it means for different asset classes. In order to ameliorate the excessive price inflation experienced in the U.S. the Federal Reserve needs to tighten financial conditions and destroy consumer demand. This is how I characterized their mission:

From my perspective, the Fed is trying to induce a mini-GFC.

If the Fed wanted to avoid causing events similar to those experienced during the Great Financial Crisis they would likely need to pivot now. Economic data is deteriorating and the 10Y-3M curve has inverted. High inflation and low unemployment is the cover the Fed is using to continue with increased tightening.

Poetically, the saying “it’s different this time” is actually always correct. No two time periods are exactly the same. But there is a difference between circumstance and outcome.

Market participants often believe that the outcome will be different this time simply because the circumstances are different. This is an imperfect conclusion. History suggests that pivots happen for a reason and more often than not that reason is not promising for the economy. A low unemployment rate today guarantees nothing. The unemployment rate was low at 4.6% in 2007 when the pivot occurred. In 2000, it was even lower at 3.9%. In fact, the pivot happened to signal the bottom in unemployment in both cases.

The Fed needs to find success in controlling inflation. I think it is likely they will continue to tighten until that happens unless something major in global financial markets breaks. By the time that happens, I expect an earnings recession will be inevitable.

This means that a Fed pivot will signal more pain is ahead before things improve. That will benefit bonds before it benefits equities, assuming that inflation does moderate which would occur during a recession. For these reasons my investment portfolio is underweight equities and I will exercise patience as the pivot occurs. In contrast, I will be buying longer duration bonds as rate cuts approach.

Investors are expecting a pivot from the Fed at any moment. Markets continue to rally on bad economic news because it suggests the Fed will be able to cut rates. But it’s more likely that the bad economic news will accumulate to a point-of-no-return before the pivot actually happens. In fact, the pivot will signal to markets that the point has been reached and the economic damage has been done.

If this plays out as expected, the pivot will not be a sign to be bullish on equities. Instead, earnings weakness should be expected. Alternatively, bonds would benefit from lower rates, inflation, and growth.

When do you think the pivot will happen? Leave a comment below.