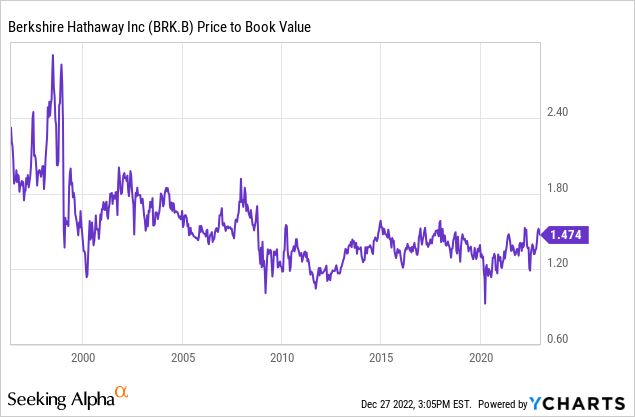 Buffett’s often said Berkshire won’t be one of the best performing stocks in the market, nor will it be one of the worst. I’d generally agree with this statement, and maintain a “hold” rating on BRK.B. We’ll dig into Berkshire’s normalized earnings and expected returns, as well as “The Apple Risk.” In the decade ahead, I estimate returns of 7% per annum for Berkshire Hathaway (NYSE:BRK.B) (NYSE:BRK.A).

Berkshire has too main arms, its investments, and its operating businesses. As of last quarter, the company had a $296 billion stock portfolio. Here are its top holdings:

These stocks make up 83% of Berkshire’s equity portfolio, and account for $17 Billion of earnings attributable to Berkshire. I’ve estimated Berkshire’s share of earnings from the entire portfolio to be around $20.5 billion.

As for the operating businesses, they’ve averaged about $26.5 billion of operating earnings over the past three years. This figure excludes gains and losses in Berkshire’s stock portfolio, but includes dividends. If we subtract the roughly $5 billion of dividends Berkshire tends to receive from Apple, Bank of America, and the like, you can see that the wholly owned businesses, BNSF, BHE, and others earned an average of $21.5 billion over the past three years.

Now, add the two bolded numbers together, and you get $42 billion of normalized earnings power. This gives Berkshire at normalized PE of 16.

Is Now A Good Time To Buy?

Over the past five years, this is about as expensive as Berkshire’s been on a price to book basis. But, zoom out a little further, and you’ll see a different story:

Financial companies, like Berkshire’s insurance arm, traded at much higher valuations from 1995 to 2005. Interest rates remained moderately higher throughout this period, especially when compared to the past 10 years. If the U.S. economy can maintain interest rates around 4-5% again, there could be a bull market in financials (Banks, insurance companies, etc. would benefit).

The Mechanics Of A 7% Annual Return

Note that if Berkshire grows its book value per share at 7% per annum and trades at a price to book of 1.5x in 10 years’ time, you’d get a nearly identical result.

Why I Sold My Shares – The Apple Risk

I purchased Berkshire shares in 2020 and early 2021 for an average price of $234 per share. At the time, Berkshire was very out of favor. High-flying tech was the place to be, and Warren Buffett was “washed up.” He sold banks and airlines at a loss in 2020 after-all, and didn’t own Tesla (TSLA). I still believe Buffett made the right moves divesting from the airlines, which now have terrible balance sheets. And, it’s obvious he did the right thing in avoiding the tech bubble.

So why did I sell? First of all, Berkshire’s share price and valuation ran up a great deal in a short period of time. I was seeing lower returns ahead. Also, I was not a fan of Berkshire’s enormous Apple position. The position is now 42% of Berkshire’s stock portfolio and accounts for 27% of Berkshire’s book value. That’s an enormous chunk of change. I wrote a bearish article on Apple a few months ago, its stock’s been plummeting since. Apple has cyclical profits, and appeared to me to be at a peak in the cycle. This may continue to weigh on Berkshire’s book value going forward. Apple is definitely not a Graham and Dodd type stock, it trades at a price to book of 39x:

Apple isn’t the only low return stock Buffett owns either, stocks like Chevron (CVX) and Coca-Cola (KO) have become very popular of late. It’s difficult to pencil out a decent return from here for these equity positions.

The other issues are Berkshire’s heavy exposure to the U.S. economy, which has been on fire over the past five years, as well as Berkshire’s cumbersome ability to move capital around, due to its size.

Berkshire Hathaway is a very respectable investment, and it has a decent chance to outperform the S&P 500 in the decade ahead. But, the days of an automatic 10% per annum may be in the rearview mirror. Since selling down to book value in 2020, Berkshire has gained in popularity. The company’s capital allocation is not as agile as it once was. Bill Ackman’s team at Pershing Square (OTCPK:PSHZF) has discussed this at length. This makes it difficult for Buffett to exit his Apple stake, which accounted for 27% of Berkshire’s book value last quarter. Apple’s been selling off of late, after a tremendous run-up in 2020 and 2021. This may continue to be a drag on Berkshire’s book value. With an expected return of 7% per annum, I maintain a “hold” rating on BRK.B.