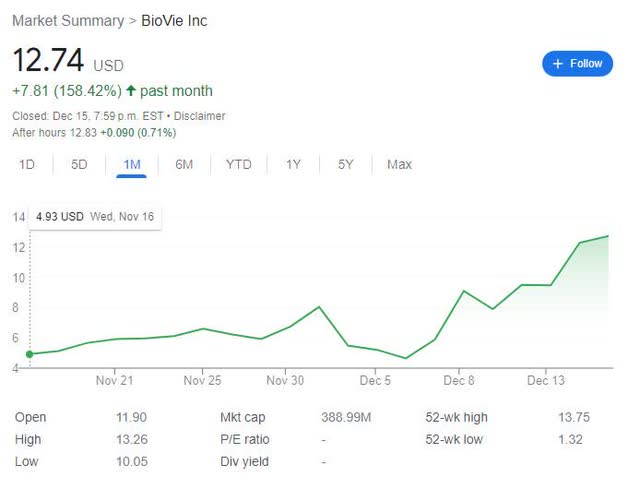 A day later, on Oct 7, the company issued a letter to the shareholders to summarize the results.

Let’s now turn to the results.

For readability, I list only the headings and not the details of each of these 13 primary endpoints (emphasis added)

The table below lists Oct 5 PR’s headline and the sub-headlines.

Regarding the two objectives, further in the PR, the company explains:

This trial was launched with two design objectives: 1) the primary objectives are safety and a drug-drug interaction study as requested by the FDA to demonstrate the absence of adverse interactions of NE3107 with levodopa; and 2) the secondary objective is to determine if preclinical indications of promotoric activity and apparent enhancement of levodopa activity can be seen in humans.

1. It’s unknown currently whether or not the other 11 pre-specified endpoint results support or contradict BIVI’s claims that the trial has met its two “design objectives”, as those results are not disclosed.

2. The so-called “clinical-meaningful” “superiority” [UPDRS part 3] data, comparing two arms or un-prespecified subgroups by age, are not statistically-significant, which means that they are not a reliable source to draw any conclusion.

For example, the headline that states “NE3107-treated patients experienced greater motor control in Parkinson’s trial” is poorly or un- supported, by the reported p2 data so far, in my opinion.

Previously (on Sept 7 2022), BIVI has reported results from their phase 2 AD trial. Two recent updates were announced on Oct 5, and on Oct 6.

The enrolled patients were treated with 20 mg of NE3107 twice daily for 3 months.

The table below lists the AD trial’s pre-specified endpoints. As previously, only the headings (except the first* endpoints), are listed.

Having seen the pre-specified endpoints, let’s now turn to the announcements.

1. For an open-label [uncontrolled] study, which had five primary biomarker endpoints, the announcements have switched the trial’s pre-specified priority, namely from primary (biomarkers) to secondary (cognition measurements), and reported/emphasized accordingly.

2. Given the fact that it’s an single arm, open-label trial (no placebo control) in this trial, the statistically-significant “improvement” cognition data at 3 months, from the patients’ own baseline, cannot be attributed entirely to the treatment effect. Namely, there is no reliable way to separate the treatment effect from the placebo effect.

3. Of four cognition measurements reported, i.e., ADAS-Cog, CDR, ADCOMS, Global Rating of Change, only the first two are per protocol and as noted before, CDR results are not a direct measurement, but calculated/converted results from QDRS, according to the protocol.

*Correction: A reader pointed out that, although not in PRs, or CEO’s letter, BIVI did disclose MoCA and MMSE data in the company presentation (slide 12). MoCA and MMSE results are mixed and not as strong or positive as the other cognition data.

4. The four (biomarker & other) data, mentioned or reported, i.e., TNFα, CSF phospho-tau level, the ratio of p-tau to Aβ42, and the “Horvath DNA methylation SkinBlood clock”* score change are not pre-specified, per protocol endpoints.

Among the five pre-specified biomarker endpoints, only the first, i.e., advanced functional MRI results, was mentioned.

*Note: the “Horvath DNA methylation SkinBlood clock” measurement is not a per protocol endpoint in BIVI’s current p2 AD trial, on-going p3 AD trial, or any other AD trials that I’m aware of. Its validity and usefulness as supportive data in the NE3107 data package are questionable, in my opinion.

5. What happened to the 23rd patient?

On Oct 7, BIVI issued a letter to the shareholders to summarize these results:

Firstly, as commented earlier, “clinically meaningful increase in motor control” [from the PD trial] is poorly or un-supported, as there are no statistically-significant results reported from BIVI’s placebo-controlled p2 PD trial.

Secondly, BIVI’s open-label p2 AD trial, per protocol, is primarily about biomarker data, though the company did not report on the four out of five pre-specified biomarker data.

It should be noted that for AD trials, biomarker data, though important/supportive, are un-reliable substitutes for cognition efficacy data, e.g., accelerated approval of Aducanumab. Nor is the correlation between biomarkers and cognitive data a pre-specified endpoint.

This is because pre-specified biomarker data, however positive, cannot be used to evaluate if or to what extent any observed cognitive improvement is due to the treatment or the placebo effect. Only by comparing cognitive data between the arms (treatment vs. placebo) directly, can the real cognition efficacy data be established.

For example, the need for a placebo arm can be seen in other AD trials, such as ANVS’ small, placebo-controlled AD trial. ANVS’ drug showed a statistically-significant improvement in ADAS-Cog change at 25 days, over patients’ own baseline, but not over the placebo.

This means, no data from either trial, should be given undue weight, in terms of how positive they really are. They are far from being conclusive.

As I comment recently in my article on AVXL, also an AD/PD drug developer, I appreciate deeply the dedication of companies & investors in this space, as they endeavor to develop safe & effective treatments to meet such serious, unmet medical needs.

Regarding BIVI’s p2 PD & AD trial results, I think perhaps the investors’ enthusiasm has gotten ahead of the results.

Yes, these are probably positive results, but a >600% in 6 months or >150% in one month increase in valuation worth of positivity, I’m not sure.

For example, two peers in the same space, ANVS, and INMB, that are much more modestly priced, also reported “positive” early data from their respective trials.

(Compiled by author, from SA info)

It is possible that this enthusiasm was partly due to the speculative hype for the upcoming p3 AD trial topline (n=400, duration=30 weeks) that BIVI expects by mid-2023.

If that is the case, one must remember that “positive” early (p1, p2) data, regardless of how “positive” they may seem, is still a long way from a successful p3 readout.

Thanks for reading. All the best!