BlackBerry Could Just Bounce Back (NYSE:BB) 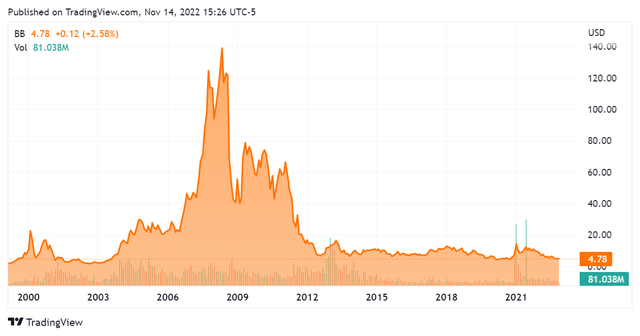 BlackBerry Limited (NYSE:BB) is no longer the company that you may think it is. While it came into prominence as a maker of smartphones with a readily-distinguishable physical keyboard, that business is no longer in operation as of Q1 2022.

This rise-and-fall played out across corporate boardrooms, Wall Street, and, of course, the stock itself. Throughout this time BlackBerry saw its shares rise as high as $140 in the run-up to the financial crisis, only to subsequently crater, bounce around a bit, and then peter out into its current state.

Now trading at under $5 a share, this once-dominant company has had to reinvent itself as an enterprise technology services provider focused on cybersecurity. This was marked by the appointment of a new CEO, John S. Chen, in Q4 2013. No longer in the business of selling hardware itself, it is now a software company focused on three core verticals, as per its 2022 fiscal Q1 10-Q filing:

In plain English, this is software that allows devices to securely communicate with each other across a network. Additional offerings within this vertical include BlackBerry Cyber Suite, BlackBerry Dynamics, BlackBerry Workspaces, BlackBerry AtHoc, and BlackBerry Alert, which are all focused on different layers of mobile device security.

This revenue line also includes SecuSUITE, a maximum-security messaging capability (voice/text) that is sold into the public sector.

BlackBerry Technology Solutions, or BTS, is primarily centered around BlackBerry QNX, which is a “real-time operating system” and associated technologies for “connected embedded systems.”

This means that BlackBerry QNX is software for networked devices that have a computer embedded in them. An embedded system is a hardware device with a specific functionality that requires a computer integrated into it to work – this includes a wide variety of devices such as cars, medical equipment, and mobile phones. Notably, this does not include standard computers in and of itself, but the variety of embedded devices is quite significant and can even include things such as modern farming equipment.

The other business line within BTS is BlackBerry IVY, which is a specific instantiation of its QNX technology for automobiles. This technology integrates data from across the sensory output of the vehicle, allowing a more granular view than was previously possible into the vehicle. As mentioned it is structured so as to support “multiple vehicle operating systems” and “multi cloud deployments,” which means the technology is generalized enough to work across a wide spectrum of both hardware and software systems. This kind of generalized system is considered advantageous in a software context, as it requires much less “reinventing the wheel.” Additionally, if Amazon Web Services (AWS) is involved, it is fair to assume that there is a significant TAM (total addressable market) to go after – this has certainly been the case thus far.

Other software services within this vertical include BlackBerry Radar and BlackBerry Jarvis, which are utilized to ensure the security of networked embedded devices at different layers.

The Licensing business primarily involves licensing the company’s legacy intellectual property. It is distinct from the services outlined above in that it makes use of the firm’s extant patent portfolio as opposed to these relatively new services; this serves as a way for the company to harvest additional revenues from intellectual property it had already developed previously.

Taking all of this together, we see that BlackBerry is completely different from what it used to be.

Nonetheless, the software services business can indeed be a good one – BlackBerry partner Amazon Web Services is perhaps the best example of that. Much higher gross margins are perhaps the key economic facet that distinguish this kind of business from the company’s previous revenue line of selling phones.

The next section will review the company’s financial performance since 2013 to see how its decade-long pivot is coming along.

The revenue picture at first glance is not a pretty one, but this is to be expected. As it now stands, the company’s revenues are a mere 6.5% of what they were in Q1 2013 – not something any investor likes to see.

Nonetheless, we must recall that this company is in the process of reinventing itself, although it appears to be taking some time; worth noting is that gross margins (revenue/cost of revenues) have been increasing throughout. This is to be expected for the new business lines, and I will add that this figure is basically as high as gross margins get in most any business.

Breaking out the quarterly figures, we unfortunately see a picture of mostly declining revenues, albeit with a strong gross margin each time:

This does not bode well, although worth noting is that the IoT business is still seeing double-digit growth of 28% YoY. Although the other business lines don’t have such remarkable figures, this kind of growth can add up long-term.

Keeping to the quarterly view over the last 10 quarters, the picture becomes more nuanced. Even as revenues have been mostly-declining, BlackBerry has posted a positive net income for 2 of the last 10 quarters. This is a preliminary, albeit significant, indicator that its new business model is viable.

Looking over to the cash side of the books, we again see a very mixed picture – yet the occasionally strong quarter. Six of the last ten quarters had positive cash from operations, which is another indicator that the new business model works (sometimes).

Taking a look at the cash & cash flow situation, we see that the company still has a positive (although decreasing) book value per share, $2.30 as of Q2 2022:

The net debt figure has remained negative throughout the last 10 quarters, meaning that the company has more cash & cash equivalents than it does liabilities.

As to cash flow, BlackBerry is not dealing with significant interest payments and has had two quarters where this number was immaterial.

Additionally, it generated positive levered free cash flow for 6 of the last 10 quarters. This is worth dwelling on as it feeds right into EBITDA; it means that the company was able to generate positive cash flows even after servicing its debts. I interpret this as a particularly strong signal.

Overall BlackBerry’s books are a mixed bag, but aren’t anywhere near as bad as they may seem. The story here to me is clear: it has proven its business model and has been able to generate cash, but it isn’t posting the kinds of revenues where it is sustainably generating profits and/or cash flow.

BlackBerry, as an embedded device software company, has been particularly sensitive to supply chain disruptions in the chip space. These disruptions have been more pronounced and prolonged than those within other commodities, and unfortunately, we are still not back to pre-pandemic baseline in this regard as per the latest earnings call. This prohibits the amount of embedded devices that can come to market at a given time, which in turn decreases revenues for BlackBerry.

Nonetheless, the company has shown that its new business model can generate cash flow. As to secular trends, I would not hesitate to say that embedded devices & the internet of things will continue to grow – and significantly at that. Once the chip situation clears up BlackBerry will be good to post larger revenues and in turn, could generate significant sustained cash flows.

Additionally, it has added brand-name customers as per its latest earnings report, including the New York Stock Exchange as well as the U.S. Department of Treasury. Customers like this don’t come along unless you have a leading offering in the space, which it seems that BlackBerry does. I actually think BlackBerry can do quite well in its new niche, but the short term will be difficult. On a longer time horizon, I will have to disagree with the market at present and call BlackBerry Limited stock a buy.