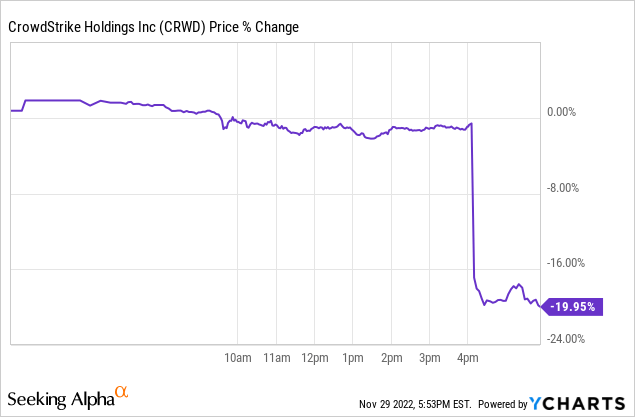 Last week, CrowdStrike (NASDAQ:CRWD) announced its Q3 2023 earnings results. No, that’s not a typo. Fiscally, CrowdStrike is one year ahead compared to the calendar.

You may have seen the market reaction immediately after the results were announced.

Judging from this 20% drop, you might think that the earnings were really bad. Let me tell you clearly, from the start, that was not the case. A few elements were not as outstanding as they usually are, but this was still a good quarter and nothing thesis-changing happened.

Before we dive into the earnings, I want to give you my opinion on the big stock price drop already because it illustrates the approach of Potential Multibaggers. Potential Multibaggers aims to find stocks that can 10x or more over the next decade. That means, inherently, we are not momentum investors. And momentum is what is completely gone now for growth stocks.

As you can see, $10,000 invested means $142,280 if you invested 10 years ago in Constellation Software (CSU:CA) (OTCPK:CNSWF). For Enphase (ENPH), it’s even $1.09 million. Do you often hear stories of people who got very rich holding these stocks? Not often. The reason is they try to time the market and sell if there is a big drop.

As Chris Mayer showed in his great book 100 Baggers, ALL 365 100-bagger stocks he researched had dropped by at least 50% at least once, and most dropped much deeper and more frequently. This is just to say that long-term investing is not easy at all.

I give this introduction because you have to make a distinction between the high volatility of stocks that can 10x or more and their fundamentals. This nearly 20% drop in CrowdStrike’s stock price does not mean that CrowdStrike did fundamentally poorly. That’s sometimes the confusing thing about investing: a really bad quarter can be followed by a moderate reaction and a good quarter by a very harsh one.

Ok, usually CrowdStrike beats the consensus by a bit more, as you can see.

The average beat is 5.25% and this 1% beat is the lowest since the first quarter CrowdStrike was a public company. For momentum investors, that’s a big red flag. To me, as a long-term investor, it’s not. Short-term movements are influenced by emotional reactions to the results or trading. Long-term movements are caused by the results themselves.

ARR or Annual Recurring Revenue increased 54% year-over-year and grew to $2.34 billion. That’s a slight miss of the consensus of $2.40 billion or just 0.25%, a rounding error, as it were. $198.1 million was net new ARR from this quarter or about 10% quarter-over-quarter growth. That’s still very solid. If you would attribute the whole $6 million miss to the current quarter, that’s still just a 3% miss. In this environment, that’s not a big miss too. Management addressed the slight ARR miss in the press release.

The impact of ARR that was moved into the next quarter was $10 million. On the conference call, George Kurtz added more color on how much slower the deals were:

The fact that you don’t have to overdramatize the slight miss can also be seen in billings, which beats the expectations by more than 3%, and deferred revenue, which beats by about 1%.

When I picked CrowdStrike as a Potential Multibagger in June 2020 at $98, the company had 11 modules. In the current quarter, CrowdStrike will roll out its 23rd module.

That results in a dollar-based net retention rate of more than 120%, which has been the case for CrowdStrike for the last 5 years. Management doesn’t disclose the exact number anymore, but Founder and CEO George Kurtz said on the conference call:

Our dollar-based net retention rate was well above Q3 of last year and consistent with our Q2 performance, which was at the highest level in seven quarters.

That means that the dollar-based net retention rate must be above 124.8%, if you look at this graph.

Its gross retention, so the number of customers that stay has been consistently between 97% and 98%, or even higher. And this quarter, that was the case again at above 98%.

Customers paying more than $1 million in net new ARR were up 67% year-over-year. Founder and CEO George Kurtz on the conference call:

Additionally, ending ARR for the $1 million-plus cohort surpassed the $1 billion milestone in Q3 with a 67% year-over-year growth rate.

The company raked in $174 million in free cash flow, up 41% year-over-year. That is a free cash flow margin of 30%. Beware, though, that there was for $140 million in stock-based compensation. Nevertheless, even if you would withdraw this non-cash expense completely, CrowdStrike is still firmly FCF positive with an FCF margin of almost 6%. I think looking at general dilution is better, so this is an extremely conservative way of thinking. But even then, unlike many companies in this sector, CrowdStrike can combine profitability with high revenue growth.

You also don’t have to worry about the financial stability of CrowdStrike. It has a net cash position of almost $1.8 billion.

The company also shares its magic number, which was 1.2 this time. The magic number is how much a dollar in investments in sales and marketing generates in revenue. While it’s lower than historically, 1.2 is still very good.

Usually, when a stock is down so much, and the results look solid to good, guidance is the cause of the big drop. Management guided for revenue between $619.1 million and $628.2 million for the fourth quarter, while the consensus stood at $634.2 million. The midpoint misses the consensus by 1.7% but it still represents about 45% growth year-over-year.

While a miss in guidance is not great, of course, such a small miss is not a disaster either. Management usually guides very conservatively and it will probably beat this guidance. Such small misses are very important for traders; for me, as a long-term investor, they are not as long as they are not too company-specific. To me, this doesn’t look thesis-changing, just short-term noise.

The company raised its guidance for the full year again to the range between $2.223 billion and $2.232 billion versus the consensus of $2.12 billion. Management’s previous guidance was between $2.190 billion and $2.205. This again shows how very small these so-called misses are to a consensus that is just the result of educated guesses.

Management expects ARR growth next year to be the same as this year.

Kurtz showcased a few technical wins from CrowdStrike’s platform. This is the first:

The significant advantages of CrowdStrike’s Falcon Complete offering were showcased in the first MITRE ATT&CK evaluation for security service providers. Out of 16 participants evaluating, the Falcon platform’s integration of industry-leading technology and human expertise enable us to deliver the highest coverage. This was MITRE’s first closed door test, which means the participants did not have prior knowledge of the adversary, and retesting was not allowed. We believe this evaluation demonstrates why CrowdStrike is the clear leader in EDR and XDR.

False positives are often not reported well enough by companies participating but they are very important because they show how companies feel about certain solutions.

The macroeconomic backdrop is also a tailwind

While the macroeconomic context is not favorable, George Kurtz pointed out that it’s also a tailwind for CrowdStrike:

Based upon our business value assessment and realized analysis, we estimate that, on average, enterprise customers observed a 68% increase in operational efficiencies with the Falcon platform, equating to an offset of approximately 3.5 full-time employees. We believe today’s macro pressures on businesses and the escalating threat environment make Falcon’s value proposition as a consolidator more important today than at any other time in CrowdStrike’s history.

And Kurtz shows that he also has great sales capabilities:

In order to solve agent bloating complexity within the security and IT stack, while also protecting the business from cyber adversaries and reducing operating costs, companies need to consolidate on a truly integrated platform, not acquired technologies stitched together by an invoice.

And a third quote:

When we think about budgets, again, all the feedback that we’ve seen is that budgets are not in the enterprise getting cut. There’s so many mandates around security. And just as customers move to the cloud, what they are looking to do, though, is optimize that spend and consolidate.

So they may not be spending as much money with a whole bunch of vendors, and they’re looking to consolidate with companies like CrowdStrike.

It’s always subjective to value stocks. It’s not because something is optically cheap that it really is and something expensive can still be a good or even a great long-term investment. For growth stocks, valuation is even much harder. You can’t compare a company growing its revenue by 40% to one that grows 12% in profitability. That doesn’t mean that you should just completely ignore valuation altogether. For growth stocks, I think a ballpark valuation is the highest obtainable target, though.

CrowdStrike has made a goal of $5 billion in ARR or annual recurring revenue in the fiscal year 2026, which is the calendar year 2025. In other words, in just 3 years.

Now, I won’t claim CrowdStrike is ‘cheap’ here, but it seems at least reasonably valued for a company expected to grow at 30% and more for years to come. You can disagree on this, and that’s also what makes a market, of course.

What to think of this quarter?

We go through confusing times for many investors. If a stock drops by 20%, it never feels good, of course, but it doesn’t mean that there are good reasons for that big drop.

CrowdStrike’s sales cycles became a bit longer, by 11%, which is not unsubstantial. But the deals are not canceled, just pushed further into the future.

Another thing to highlight is that net new ARR was up 67% year-over-year for accounts spending more than $1 million per year. This shows that the somewhat slower growth projections are overwhelmingly in smaller customers, which are much more vulnerable to macroeconomic headwinds.

So when we think of the net new logos, it really corresponds to what we talked about in terms of what we saw in that SMB space. The SMB space is the one that drives the velocity of our net new logos.

It was another beat-and-raise quarter for CrowdStrike and the thesis is fully intact. Yes, there are macroeconomic headwinds, which we see for all companies, but the impact is limited.

I don’t see any reason for real concern here. This is really an overreaction, but as a long-term investor, I’m more excited that I will be able to add at lower prices than I’m afraid of this.

In the meantime, keep growing!