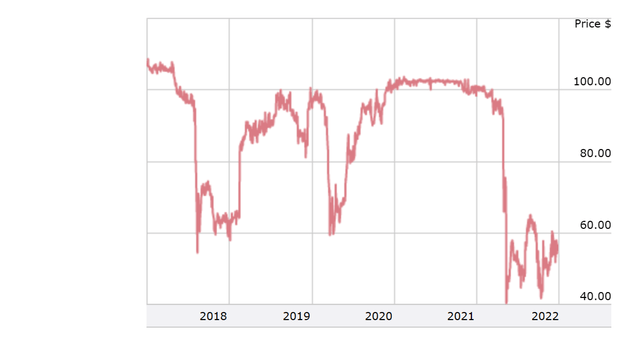 The large holders may decide that it is better to own the new securities, than have the company file for bankruptcy. In the private credit markets and with bank loans, these types of transactions occur frequently. With publicly held debt, it is usually not possible to get every small holder to accept the exchange. Thus, the company will set a minimum threshold percentage required for the exchange transaction to be consummated.

I have found that such situations can be very rewarding for those who purchase relatively short maturity debt of the distressed company and then see the exchange alleviate the company’s liquidity issues, for at least long enough for the company to be able to redeem the much-reduced amount of the short maturity debt that remains after the exchange transaction is consummated.

These situations can be likened to game theory problems such as the “prisoners dilemma”, where if too many bondholders attempt to profit from the “free ride” by not participating in a distressed exchange, then all will lose if the exchange does not do through and the bonds default.

Diebold Nixdorf (NYSE:DBD) is a distressed company whose stock has declined precipitously. In assigning a Ca rating DBD’s Senior Unsecured Notes on May 23, 2022 Moody’s said:

Diebold’s operating performance has been impacted by pandemic-related supply chain challenges, which were unexpectedly exacerbated in Q1 2022 by social distancing measures in China and the Russia-Ukraine conflict. The supply chain difficulties resulted in elevated input costs, elevated logistics costs, and component supply delays impacting timing of finished product deliveries. While the company expects these challenges to gradually abate over the course of 2022, in the near-term they are resulting in cost pressures and working capital inefficiencies. Diebold is raising product pricing to sustain margins, but it may have difficulty raising prices on a sufficiently large portion of volumes quickly enough or to the full extent of the cost inflation. While continued strong order bookings and backlog are indicative of the sustained strong demand for Diebold’s differentiated solutions, in the near-term the company’s profitability and cash flow generation are likely to be affected. The operating dislocation comes at a difficult time for Diebold due to near-term debt maturities….

Once it became apparent that DBD would probably not be able to redeem upcoming debt maturities from cash generated from operations or by issuing new securities, it commenced an offer to exchange some of its upcoming maturities for new securities with longer maturities. The offer required that at least 81.3% of the DBD 5.75% Senior Unsecured Notes due 4/15/2024 be tendered for the exchange to be consummated. After a number of extensions, they finally barely obtained enough securities tendered to consummate the transaction and issued a press release:

HUDSON, Ohio, Dec. 27, 2022/PRNewswire/ — On December 27, 2022, Diebold Nixdorf, Incorporated (“Parent”) (DBD) announced that its previously announced private exchange offer and consent solicitation (the “Exchange Offer and Consent Solicitation”) to certain Eligible Holders (as defined below) with respect to Parent’s outstanding 8.50% Senior Notes due 2024 (144A CUSIP: 253651AA1; REG S CUSIP: U25316AA5; Registered CUSIP: 253651AC7) (the “2024 Senior Notes”) expired as of 11:59 p.m., New York City time, on December 23, 2022 (the “Expiration Time”). According to the information received from D.F. King & Co., the Information and Exchange Agent for the Exchange Offer and Consent Solicitation, as of the Expiration Time, $327,888,000 in aggregate principal amount of the 2024 Senior Notes (representing 81.97% of the aggregate principal amount outstanding of the 2024 Senior Notes) had been validly tendered and not validly withdrawn.

The “Settlement Date” with respect to the Exchange Offer and Consent Solicitation is expected to occur on December 29, 2022 (the “Settlement Date”), which is the third business day following the Expiration Time. On the Settlement Date, subject to the satisfaction or waiver of the conditions of the Exchange Offer and Consent Solicitation and upon acceptance by Parent of the 2024 Senior Notes, Eligible Holders who validly tendered 2024 Senior Notes that are accepted for exchange will be eligible to receive, for each $1,000 in principal amount of 2024 Senior Notes, $1,000 principal amount of units (the “Units”) consisting of (1) $1,000 principal amount of new 8.50%/12.50% Senior Secured PIK Toggle Notes due 2026 to be issued by Parent (the “New Notes”) and (2) a number of warrants (the “New Warrants” and, together with the Units and the New Notes, the “New Securities”) to purchase common shares, par value $1.25 per share, of Parent (“Common Shares”), which will, in the aggregate, be exercisable for up to 19.99% of the Common Shares outstanding on the business day immediately preceding the Settlement Date (calculated on a non-diluted basis and prior to giving effect to any exercise of the New Warrants and the payment of the exercise price thereof via net share settlement, which applies to any exercise of the New Warrants), subject to adjustment.

DBD also obtained consents required from the institutional holders of other securities to waive certain covenants to their indentures. As a result of the exchange, instead of having $400 million 8.50% Senior Notes due 2024, there will only be $72.11 outstanding. The most recent DBD 10-Q contains a Note 9: Debt which shows Outstanding debt balances as of 9/30/2020, which is reproduced below. I have added a column indicating that there will be $327,888,000 less debt due in 2024 and an equal amount more debt due in 2026.

Having $328 million less debt service to pay in 2024, clearly makes it more likely that DBD can put off bankruptcy, at least until after 2024. Thus, holders of the 8.50% Senior Notes due 2024 will receive a yield to maturity exceeding 60% from buying the notes at the current price, as long a DBD survives past 4/15/2024.

DBD is a leading producer and servicer of ATMs and similar equipment and software for banks, with installed base share of about 30%. The sector is relatively concentrated, with and its main competitors NCR Corporation (NCR) and Hyosung accounting for over 65% of the global installed base. ATM-related revenues account for the significant majority of Diebold’s Banking segments, and most of its services and software revenues are related to the ATM installed base. Retail banking is not much of a growth industry, with many considering most of the developed world to be over-banked or close to it.

DBD’s retail business is concentrated in Europe and benefits from long-standing relationships providing point-of-sale (POS) hardware and related services to large European retailers (e.g. IKEA, Tesco PLC (OTCQX:TSCDF)). Unlike its competitor NCR, Diebold does not have a large presence in POS software, does not focus on tying hardware and software sales, and pursues an open architecture strategy integrating hardware with the customers’ existing POS software solutions. Within retail hardware sales, POS terminals still represent a majority of sales but self-checkout (SCO) solutions account for an increasingly meaningful portion of sales and were growing strongly. However, major customers of DBD’s self-checkout solutions such as Walgreens Boots Alliance (WBA) have been under competitive pressure from online retailers and have been finding out that in some jurisdictions SCOs are incompatible with the elimination of cash bail for shoplifters.

One area of potential growth is DBD’s electric vehicle (EV) charging station business. The Global Electric Vehicle Charging Infrastructure Market Size accounted for $17.2 Billion in 2021 and is projected to achieve a market size of USD $182.9 Billion by 2030 rising at a compound annual growth rate of 30.2% from 2022 to 2030. If DBD can stay in business long enough, that could be its’ salvation. DBD’s August 2022 Investor Presentation ends with a slide that has the title “Well Positioned for EV Charging Opportunity” and includes the bullet points:

Targeting service to over 30,000 EV charging stations by end of 2022 – and just getting started

One short-term risk, which could also be viewed by some as a buying opportunity, is that even the Ca rating by Moody’s and the C rating by S&P could be lowered to “selective default”. In the May 23, 2022 Moody’s report cited above, Moody’s warned:

There definitely has been a need of such a transaction. However, it is not certain that the exchange 81.97% of the $400 million outstanding 8.50% Senior Notes due 2024 for a like amount of new 8.50%/12.50% Senior Secured PIK Toggle Notes due 2026 and a number of warrants to purchase common shares, par value $1.25 per share, will be considered a distressed “enough” transaction to cause the rating agencies to change the ratings to “selective default”. The fact that the tendering bondholders are not giving up any par value and are getting senior secured notes and new warrants, makes the decision as to whether or not to change the ratings to “selective default”, a close call. It could depend on what their mood is on any particular day.

In any case, I believe that consummation the exchange transaction involving the outstanding 8.50% Senior Notes due reduces the probability of bankruptcy, even if the rating agencies to change the ratings to “selective default”. That is enough for me to go along for the free ride