Dominion Energy: It May Be Woke, But It Won’t Go Broke (NYSE:D) 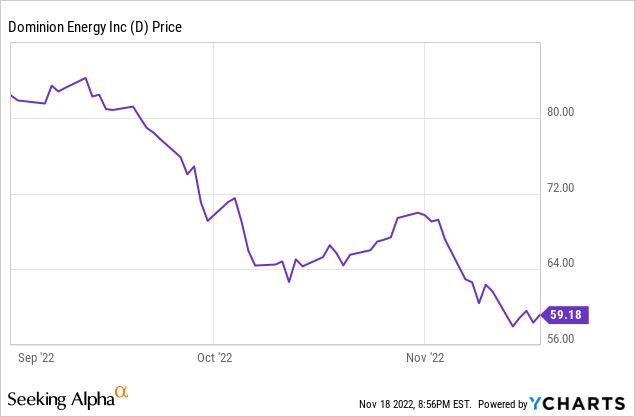 Renewable energy has long been a hot-button issue in politics. With those on the far-left praising it as a panacea for all of the world’s environmental problems and those on the far-right as a woke, value destroying waste of time and money. The truth, like most things, is likely found somewhere in the middle.

Dominion Energy (NYSE:D) has found itself and its shareholders smack dab in the middle of this controversy given the proposed $10 billion offshore wind farm to be built in Virginia. Given this backdrop, the company’s recently announced top-to-bottom business review, presented by the CEO on the recent earnings call, has taken flight in the stock market like a lead balloon.

In this article, I would like to explore the rationale for this review and express why I believe long-term investors may do well in giving the company a thorough look at currently offered valuations.

It has certainly been a miserable last 60 days to be a shareholder in Dominion Energy. The stock price has cratered from the $84 range reached in mid-September all the way down to $59.16 as of Friday’s close.

Surely, some of this sharp drop is from rapidly rising interest rates hitting the utility sector at large, however, since November, the latest leg down is primarily due to Wall Street analysts downgrading the company en-masse upon the announcement, during the Q3 earnings release, of a top-to-bottom business review initiated by the company to boost the stock price.

The business review initiation has been taken by the market as a de facto admission that something is wrong with company operations, however, on the conference call, the company reiterated guidance for the 4th quarter and stated that the main driver of this review will be focused on providing a more predictable earnings growth model going forward with a focus on further emphasizing the regulated utility operations.

In my opinion, clearly, this review indicates that the 50% ownership of Cove Point, the LNG export terminal based on the east coast of the United States is now for sale, along with other non-regulated assets still under Dominions ownership.

The state of Virginia, Dominions largest market by far, all but mandated the change away from coal in recent years and in 2020, the Virginia General Assembly passed the Virginia Clean Economy Act, which mandated a goal of 100% zero-carbon energy generation by 2050 and prescribed increasingly strict Renewable Portfolio Standards for Virginia’s investor-owned electric utilities.

The company, for some time now, has been retooling its generation capacity at the direction of its regulators, with a clear focus on renewable energy. While this evolution is still unfolding, the company is likely noticing growing pains in the costs involved in such generation operations.

Renewable energy, by its nature, is a large upfront CAPEX, with in theory, much lower OPEX costs involved. What this means for Dominion is that regulators must be 100% on board with the recouping of these large upfront costs associated with the transition from fossil fuels. If regulators are not on board, the company and its shareholders are dealt the brunt of any cost overruns, which are common, for these projects.

A good example of how this negotiation process works can be seen in the recently submitted settlement by Dominion and regulators in Virginia regarding the huge offshore wind generation facility currently under design.

Virginia state regulators, in August, issued a decree demanding that Dominion issue a performance guarantee on the project that would issue financial penalties if either development costs increase or performance of the turbines, once operational, was not adequate. In the company’s response, Dominion stated that the project would certainly be cancelled if this decree was upheld.

Thankfully, it appears that cooler heads have prevailed in this dispute and a resulting settlement agreement was reached between the company and the state of Virginia outlining a revised cost sharing plan, which provides 100% cost recoup up to a limit of $10.3 billion.

The company claims that 75% of the costs associated with construction of this facility are already fixed in place and the company expects that nearly 90% of the cost structure will be fixed by early 2023 which, if accomplished, would de-risk a large portion of this project well before the estimated 2026 completion date.

This project, and the negotiated settlement reached, show both the positives of projects such as these, with potentially 100% of the cost burden falling on customers and a guaranteed 9.35% return on investment for Dominion, along with the negatives, such as regulators wanting shareholders to shoulder more and more of the cost risks as the headline price tags go up.

I view this “business review” as potentially a shot across the bow of Virginia regulators by stating that if you actually want renewable energy, we can provide it, but do not change the rules of the game after it starts.

Utilities in general have had a rough few months given that interest rates across the board have increased substantially. Utilities, such as Dominion, are viewed less favorably by investors when corporate bonds and treasury bills offer similar yields and even greater security and therefore force shares down to provide a higher yield.

In comparison to the industry as a whole, Dominion appears to be no worse off than others in the utility space as its near-term maturities appear in line with industry averages.

The company, on the Q3 conference call, reminded investors that the company has the ability to pass along interest rate increases to customers on a significant chunk of its rate base. In addition, the company stated that it had not noticed a significant impact to business results thus far.

Next, about 50% of our interest rate exposure, the same floating rate debt and all fixed rate debt maturities over the next three years is at our regulated utilities, where it is a cost of service. As a reminder, about 35% of our existing rate base and over 75% of our growth capital is rider eligible, which allows for timely annual true-ups.

Looking ahead to future issuances of long-term debt, we manage that interest rate exposure through a variety of hedging and treasury activities, including through what is nearly $9 billion notional of interest rate hedges, which will help us keep future costs low at our parent company and at our regulated utilities.

So what does that mean? That portfolio allows us to lock-in treasury rates for issuances between now and 2026 at rates almost as low as 1%. Lastly, a reminder that economic growth and inflation and higher interest rates are all part of the mix when it comes to determining authorized ROEs across our utility businesses and our periodic rate proceedings.

So in summary, the current rate environment is dynamic, and we’re monitoring it closely. At present, however, we’re not seeing an earnings hurt from significantly higher interest rates so far this year, as higher rates thus far have generally been offset by the factors I just described. We will certainly provide an update on rates, interest expense, hedging strategies and other mitigants as we provide an update on our business review and guidance on our fourth quarter call early next year.

I do not view interest rate risk as a significant business headwind for the company, or at least, it appears to be no worse than others in the utility industry. Rising rates are certainly a concern in the near-term and may affect valuations throughout the utility sector, however, valuations at Dominion have certainly come down significantly to accommodate this risk.

Dominion, as we have discussed, has been hammered recently and taken the stock down to levels not seen since mid-2013. The company currently trades at a price to earnings multiple of 14.68, roughly 25% below its 5-year average of 19.41. The company also currently offers a competitive 4.45% dividend yield to boot.

This significant discount seems to imply a large earnings cut or change to the previously stated 6.5% long-term EPS growth rate on the horizon. While the results of the business review are not yet complete, clearly Dominion is trading in the discount bin at present.

Dominion Energy, in my opinion, may be posturing a bit here to get the attention of regulators in the state of Virginia after the showdown regarding the nearly $10 billion wind farm project. The business review, to be conducted over the next few quarters, appears to be centered on the company’s non-regulated assets and appears likely to result in the sale of the Cove Point 50% interest that the company now holds.

Virginia, for all of its faults, has a long history of being a constructive partner to Dominion and the demographics of the state are set to continue its rate base growth for many years to come.

The company is clearly having growing pains in the transition to a predominantly renewable portfolio and this is to be expected, however, even if Dominion’s long-term growth projections are modestly reduced as a result of this business review and focus on regulated assets, the current 33% discount to its peer average appears to be rather dramatically overdone.

The current entry point, under $60, I believe offers a compelling opportunity for long-term investors and I have begun to increase my rather small initial position in the name.

I look forward to your comments below. Thank you for reading and good luck to all!