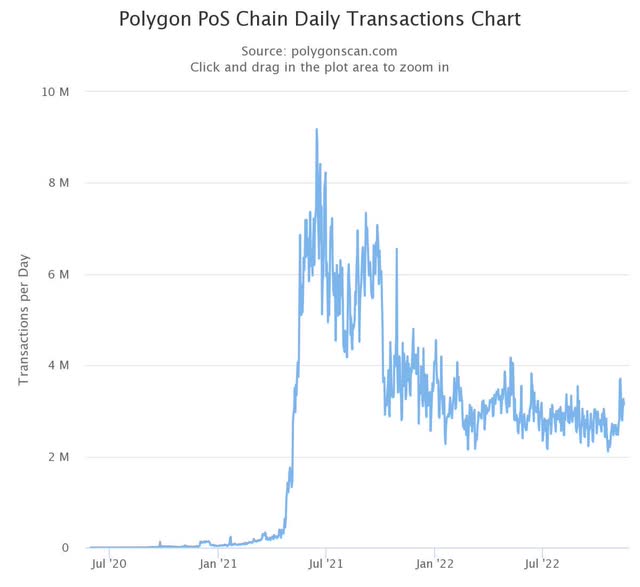 It has now been two full months since Ethereum (ETH-USD) successfully merged from proof of work to proof of stake. Despite that event being one of the more important stories in the history of crypto, it has already been completely overshadowed by the collapse of FTX (FTT-USD). And rightfully so. The FTX story is one that transcends crypto and is yet another egregious black eye on the blockchain space as an investable opportunity.

But I want to make my thoughts on FTX very clear; the fall of FTX is not a failure of crypto or of financial regulations. In my view, it is a failure of risk management, transparency, and the movement toward the centralization of blockchain-based assets. It’s a shame that it happened and I feel terrible for the people who lost money, but the good networks in this space just kept making new blocks even when other coins collapsed and companies went bust.

A big loser from the Alameda/FTX fallout appears to be Solana (SOL-USD). Solana is one of the famed “ETH killers” from the bull run of 2021 and the future of that chain now looks highly uncertain. The list of potential ETH killers also included Avalanche (AVAX-USD) and Cardano (ADA-USD). Despite the amount of Layer 1 blockchains that figure to compete with Ethereum, some of the best growth in smart contracts over the last several months has actually been in the Layer 2 Ethereum chains. Let’s dig in.

The most valuable Ethereum scaler is Polygon (MATIC-USD). It has a $7.7 billion circulating market cap and an $8.8 billion fully diluted cap. 87% of the max 10 billion token supply is currently in circulation. Daily transactions on Polygon, while lower than the boom experienced in the summer of 2021, have been solidly in the 2-3 million range for several months:

Transactions are steady, but it’s the users of Polygon that continue to grow:

The daily active user growth on Polygon has been so strong that it is now nearly at par with Ethereum’s daily active users over the last several months. Polygon has averaged 439k daily active users in the first half of Q4-22; an 18% year over year increase. Ethereum has 446k in the first half of Q4-22; a decline of 21% year over year. Ethereum’s base layer usage remains relatively constant even as scaling chains continue to see growth in key usage metrics. The beauty of this relationship is the L2 chains allow for scalability but they all still need ETH at the base layer. This means growth in chains like Polygon, Optimism (OP-USD), and Arbitrum (ARB-USD) add value to Ethereum.

While the daily actives for other Ethereum scaling chains may not be quite as large as what we’re seeing on Polygon, there’s no doubt that Optimism and Arbitrum have become far more popular among crypto users in the last several months.

Arbitrum has now flipped the daily active users on Layer 1 chain Avalanche and Optimism isn’t too far behind. Not only is Avalanche not really competing with Ethereum as a base layer chain, but Avalanche is behind nearly 3 distinctly different layer 2 Ethereum chains as well – Polygon’s DAUs aren’t pictured in the chart above because the figure is so much higher that it would distort the chart. Both scaling chains are seeing significant growth in daily transactions:

As these second layer Ethereum chains continue to onboard new users, the scaling chains add value to Ethereum; which continues to be the base layer security chain that helps shape how the Web3 internet might look in the future. We’re now officially at the point where not one but three Ethereum scaling chains have better on-chain usage trends than Solana, Avalanche, and Cardano in some key areas.

For all the speculation last year that Ethereum would have enormous competition from other Layer 1 blockchains with faster block times and more transactions per second, we simply haven’t seen anything offered by other crypto builders manifest into a true heir to the throne. And in reality, Solana (SOL-USD), the one L1 that I thought had the best chance against Ethereum might be on borrowed time.

Even with the proliferation of other options, Ethereum is still the king of DeFi. While it’s true Binance (BNB-USD) and Tron (TRX-USD) have seen faster growth than Ethereum, Ethereum is coming from a much larger starting spot. Furthermore, when we combine TVLs of ETH and the L2 chains on Ethereum, we see Ethereum as a network isn’t losing share at all:

It’s Avalanche, Solana, and the rest of the L1 chains that are losing ground in DeFi to Ethereum and Binance. From a protocol diversification perspective, Ethereum is on far more stable footing than Binance or Tron:

Protocol dominance is the amount of a chain’s TVL that is attributable to one application. The larger the number the more reliant the chain is on the success of one protocol for TVL. The table above shows Binance and Tron have generally poor TVL diversification. Tron’s is particularly bad because of the high level of dominance on one application and just 10 protocols total.

As I noted in my Ethereum article from last month, Ethereum has turned into a deflationary asset. However, at the time of that article there were roughly 7,000 new ETH coins issued since the Merge. That figure has now turned convincingly as significantly more ETH has been burned than issued over the last 10 days:

ETH has gone from +7k issuance since the Merge a month ago to net negative supply since the Merge. This is the kind of supply/demand dynamic that can really put a floor under the price of ETH even in an extended crypto winter if demand for the network continues to grow as we’re seeing on the scaling chains.

Sentiment in crypto is about as bad as I can recall seeing it. That could be an indication that we’ve finally capitulated or it could be an indication that the thesis really is dead this time. I don’t think it’s the latter. One could argue we’re actually closer to the end than the middle of crypto winter. What remains to be seen is what the regulatory headwinds could be for both crypto broadly and Ethereum specifically. There can be almost no doubt FTX will be seen as an opportunity for those who would like to see more oversight of the industry from regulatory bodies in the United States. It’s entirely possible the SEC may view ETH as a security. I don’t personally share that view but my opinion is irrelevant to Gary Gensler.

The growth in the Ethereum scalers coupled with the apparent failings of several notorious “Ethereum Killers” tells me that Ethereum is still the king of the smart contract space. Rather than make even small bets on L1 chains that are probably doomed to fail, it might be wiser to wager on the continued development of Ethereum’s scaling chains and the value those chains add to Ethereum. I think MATIC is going to be a big winner. Optimism could be as well but that chain has tough tokenomics and Arbitrum doesn’t have a token at all. The best way to play growth in the Ethereum ecosystem is still just by buying and holding ETH.