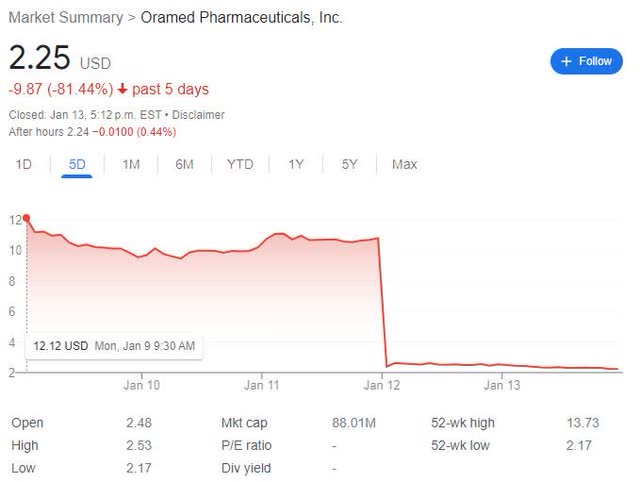 On Wednesday Jan. 11, after the market had closed, Oramed (NASDAQ:ORMP) announced the topline results from their phase 3 trial of their lead candidate ORMD 0801 in Type 2 Diabetes (T2D).

The ORA-D-013-1 trial did not meet its primary endpoint, which compared the efficacy of ORMD-0801 to placebo in improving glycemic control as assessed by the mean change from baseline in A1C at 26 weeks. The trial also did not meet its secondary endpoint, which assessed the mean change from baseline in fasting plasma glucose at 26 weeks. There were no serious drug-related adverse events. Therefore, Oramed expects to discontinue its oral insulin clinical activities for T2D. (Emphasis added)

Unsurprisingly, in the next trading session, Jan 12, the stock cratered.

In the PR, Mr. Nadav Kidron, Oramed’s CEO, commented on the results:

Today’s outcome is very disappointing, given the positive results from prior trials. Once full data from the studies are available, we expect to share relevant learnings and future plans. We thank all the patients, families and healthcare professionals who participated in the trial.

In the next section, I’d like to turn to these “positive” results from ORMP’s prior “trials” in T2D.

“Positive [efficacy] results from prior trials”

As indicated in the PR, there were no safety concerns from this p3 trial.

The failure/disappointment is entirely about missing the efficacy endpoints, namely A1C and FPG (fasting plasma glucose) improvement at 26 weeks from the baseline.

This p3 trial was designed to see if taking ORMD-0801 8mg QD (once daily) or 8mg BID (twice daily) would show statistically-significant improvements in A1C and FPG results from the baseline at 26 weeks, in T2D patients with inadequate glycemic control, and who are on two or three oral glucose-lowering agents.

We now know the answer is a No, but let us turn to the so-called “positive results from prior trials”, which the CEO referred to in his comment.

There are two points to make here.

While it is true that ORMP has conducted several prior trials (see page 4) in T1D, and in T2D patients, it is worth noting that 8mg QD and 8mg BID have only been studied in a single phase two T2D trial that lasted for 12 weeks.

For example, another prior phase two T2D trial that lasted for 28 days studied two daily doses, 16mg & 24 mg (see below).

Therefore, it’s not entirely* accurate to say that there were positive efficacy results of 8mg QD & 8mg BID being seen in [more than one] prior “trials”.

*Note: It is possible that ORMP thought 16mg QD in the 28-day trial could reliably predict 8mg BID results, without directly studied 8mg BID. In any event, the 28-day trial did not study 8mg QD.

2. 8mg QD & BID prior results are partially “positive”, only after an amendment and an exclusion.

The results of the prior phase 2 T2D trial (12 weeks), on which the p3 trail is based, can be seen here.

For the purpose of this article, I will explain the points in the order of their appearance in the sub-heading.

2a. Partially, i.e. not completely

As there are two efficacy endpoints in p3, namely A1C and FPG, positive prior results would need to meet both to be completely positive.

In the case of ORMP’s prior 12-week trial, “Fasting serum glucose levels [or fasting plasma glucose, FPG]…did not significantly change in any ORMD-0801 arms at Week 12″ (see page 14).

Therefore, the efficacy data from ORMP’s 12 weeks T2D trial are partially positive, at most, as FPG data showed no statistically-significant improvement due to ORMD-0801.

2b. Only after an amendment

One important thing to note here.

Cohort B, which studied 8mg (QD & BID) and 16mg (QD & BID), was added per an amended protocol (see page 7) after the trial had started and after a blinded review concluding that after 28 days of treatments, there were no distinctions observed between any Cohort A arms, i.e. placebo, 32mg QD, BID, TID.

In other word, the marginally positive (p=0.046) A1C results, seen only in 8mg BID (n=17) [not in 8mg QD] was possible per the amended protocol, and not per original protocol.

I also note that Cohort B, which has its own placebo [n=16=(81-15-17-18-15)] was not powered sufficiently to stand alone, and the statistical analysis was carried out, using pooled placebo data (see page 11).

2c. Only after an exclusion

If fact, there were two more positive data points here (see table below).

As seen, 16mg QD (once daily) has the worst A1C results, which did not predict 8mg BID (twice daily) results at all.

Perhaps readers wonder why these results seem better than the one quoted above: namely only 8mg BID showed an A1C improvement at week 12 (p=0.046).

These results are better only because ORMP decided to exclude 49 patients’ data from two centers (treatment arms as well as placebo arms), due to better-than-can-be-explained-but not from any error in medication or randomization or trial conducts A1C data from their placebo arms (n=14=5+9) (see page 12-13).

In my opinion, such an arbitrary exclusion of patients’ data, based on post-hoc analysis [2 centers’ placebo arms have better-than-expected data compared to other centers’], is highly troubling.

Such an exclusion likely rendered the new (better) results un-reliable, or inaccurate.

Even after the p3 failure and discontinuation of the T2D program, some may feel that perhaps not all is lost, as ORMP has other programs besides ORMD-0801 in T2D (see below).

However, as discussed above, ORMP’s prior “positive” efficacy results in general, or efficacy for 8mg QD and BID in particular, are mixed at best.

Namely, from trial to trial, there has been no consistency in terms of which dose had shown A1C or FPG improvement, if any, and there were no dose-dependent responses from either trial (28-day, or 12-week).

The failure in efficacy data, i.e. failed p3 and inconsistent p2, paints a very troubling picture for ORMP’s prospect as a drug developer.

This is because ORMD-0801’s efficacy data indicates that while ORMP’s “Proprietary Technology for Oral Drug Delivery”, sounds good in theory, it remains “unproven” and “un-de-risked”.

For example, Novo Nordisk’s (NVO) oral basal insulin candidate, I338, was shown in a 8-week phase 2 study in T2D patients to have the same [no statistically-significant difference in] efficacy as the injectable insulin glargine. This means orally-delivered insulin can work, just not (so far) with ORMP’s technology.

If this is indeed the case, the rest of the pipeline, i.e. 0801 in NASH, 0901 in Diabetes or Oravax for Covid-19, will most likely encounter the same difficulties that resulted in 0801’s failure in T2D.

In other words, unless ORMP’s “proprietary technology” is improved significantly in the future, from lessons learnt in the T2D program, it’s hard to imagine how ORMP can achieve any success with other candidates, or other indications that are based on the same foundational technology.

As someone who has experienced readout-related crashes a few times, I feel for ORMP shareholders who have suffered significant losses, realized or unrealized.

It seems a given that no company would ever warn the investors about the possibility of a p3 trial failure by presenting objective [vs. promotional only] assessments about their prior trials’ results (see examples below).

As a result, generalist investors, who rely heavily on the companies’ presentations, are disadvantaged in their being able to adequately estimate the risk [of holding through a p3 readout], in my opinion.

For the rating, I’ll choose Sell, as I estimate the probability of ORMP being able to improve their foundational technology in a timely manner to be low, given the fact that they have not done so already [if they know how], after the inconsistent efficacy results from the phase 2 T2D trials, before progressing into the ill-fated phase 3 trial.

Alternatively, a pivot (away from oral drug delivery) in R&D, will no doubt mean starting from scratch again in everything, e.g. discovery/pre-clinical/clinical work, new IP etc., and probably will be met with great skepticism from the investors, which means greater difficulties in raising additional funds.

As to the idea that ORMP may decide to cease their operation and distribute whatever cash remains (after the liabilities) to the shareholders, it’s possible in theory, but unlikely in practice, in my opinion. Regardless, I think that there are other clinical-stage biotechs that are much more likely to yield meaningful returns than a failed/closed operation.

Thank you very much for reading. I wish you all the best!

Editor’s Note: This article covers one or more microcap stocks. Please be aware of the risks associated with these stocks.