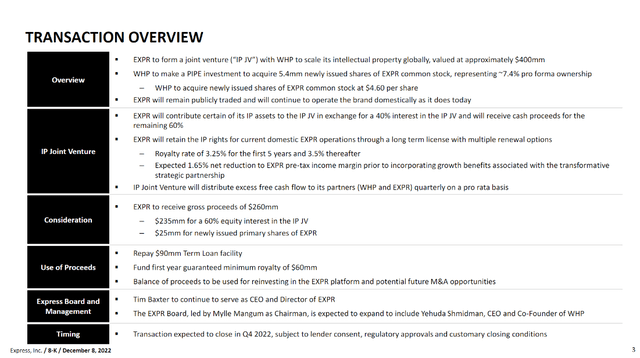 On December 8th, Express (NYSE:EXPR) announced a Strategic Partnership with WHP Global, which includes a $260M cash investment along the following terms:

This is a transformative deal for Express, repairing their balance sheet and helping grow their IP with an established partner. Optically, Express would take a $60m hit to operating income (the minimum annual royalty payment), but the Company benefits from negated interest expense ($10m+), and close to $20m of the royalties are returned via their 40% JV stake.

Express will pre-fund FY23 minimum royalty payments of $60m, providing runway until Q1-24 before an actual cash impact to their earnings.

Express has additional balance sheet tailwinds unaddressed in the above:

I expect Express should finish Q4 with a net cash position prior to the tax refund.

What Will it Take for This Deal to Work?

Our friends over on Twitter, Clark Square and EagleFang, highlighted the type of deal WHP could land for Express to break even on the JV arrangement:

Without any incremental deals from WHP, Express would need the following in FY23 to break even on a cash flow basis:

I don’t believe WHP would make this investment and sit on their hands, hopefully, they have deals already in mind. If they invest $260m and return ~$325m over the initial 10-year term (minimum royalty payments), it’s not a very compelling investment assuming their average cost of capital should be higher than 6%. Howard Marks at Oaktree has sunk $350m equity (not debt) into WHP, a good sign of smart money being present. Additionally, the minimum royalty would complicate a bankruptcy process, as exiting many store leases would reduce topline sales and make the royalty less sustainable. WHP appears well-incentivized to support Express going forward.

Despite product issues, Express consistently adjusted to trends, generating solid cash flow in every year prior to Covid. The company hired Tim Baxter to fix the business right before Covid, and he’s laid out a plan (that got delayed a bit by Covid) to shift sales from malls to outlets and e-comm. Baxter’s scenarios didn’t anticipate WHP expanding international sales, but their FY24 target of mid-single digit operating margin leaves plenty of room for royalty payments to WHP, and Express has liquidity to pursue these targets. On $2.0B of sales, this would be $80m+ of operating margin before any benefit from international or payments into the JV.

Lastly, Express is a Covid survivor. Their FY19 proxy identified a “peer group” of which, Tailored Brands, Ascena, and RTW Retailwinds filed for bankruptcy in 2020, as did J. Crew, J.C. Penney, True Religion, Brooks Brothers, Forever 21, Lucky Brand… the list goes on. Some, like Tailored Brands, announced the planned closing of up to 500 of their ~1,400 stores. Forever 21 filed in 2019 and has closed about 250 of their 790 locations since. The thinning out of peers gives Express more runway.

The main risks are (1) Express’s ability to fix their core business, (2) a poor acquisition in the name of growth, or (3) macro conditions run them over. I hope you haven’t read this far with the belief Express is a healthy risk-free investment. Rather, it is a brand with a new liquidity infusion to fix business issues that want to go do M&A. You need to believe in a basic level of execution for this investment to work. The most glaring business headwind has been fashion missteps in their women’s segment. Conversely, their men’s segment has posted six consecutive quarters of positive comps. Express will need to address their fashion misses to stop leakage in same-store sales.

For other risks, feel free to peruse some negative takes from this past weekend’s spirited Twitter discussion.

Express mentioned M&A multiple times in their announcement of this deal. While many retailers are trading at attractive multiples, I expect investors will be more concerned with Express fixing their own issues before acquiring another business. Given their tone, I would expect an acquisition announcement from Express sooner rather than later after the deal is closed, though I’d rather first see them exhaust their $34m buyback at current prices before spending a dime on M&A (~50% of the outstanding shares).

Negative market reaction since the deal was announced suggests the market is skeptical. My discussions about the deal have indicated very few investors understand it, and the shareholder ledger leaves a lot to be desired:

There is a risk the stock will continue to trade poorly until they can execute and prove this deal has real value, and attract active funds back into the fold. The lack of meaningful insider ownership also will raise concerns until Management puts their money where their mouth is and buys shares in the open market.

If Express can execute on their FY24 goal of mid-single digit operating income, their stock will likely trade near the double digits, about a 10x return from here. The WHP deal provides Express time and a partner to help expand sales internationally with less risk, hopefully paying for itself via increased sales. If Express can’t fix their declining sales in the women’s segment and spends their cash on a bad acquisition, shareholders will likely lose their full investment.

As an example of how I expect future M&A to work:

If Express can find deals like the above, future M&A would be accretive. Considering Express was trading under a $100m market cap and just valued their IP at $400m, they might find deals and sell the IP for more than the cost of the acquisition.

Execution will be required to stabilize the Express topline declines, but they now have significant runway to do so. FY23 tailwinds give the business a chance to return to cash generation and reward long-suffering common shareholders. The transaction proposed by Express and WHP Global appears to be a fat pitch, valuing the business at multiples of where the equity currently trades. If Express can execute on their stated targets, I see 10x upside on the stock by 2024.

Editor’s Note: This article was submitted as part of Seeking Alpha’s Top 2023 Pick competition, which runs through December 25. This competition is open to all users and contributors; click here to find out more and submit your article today!