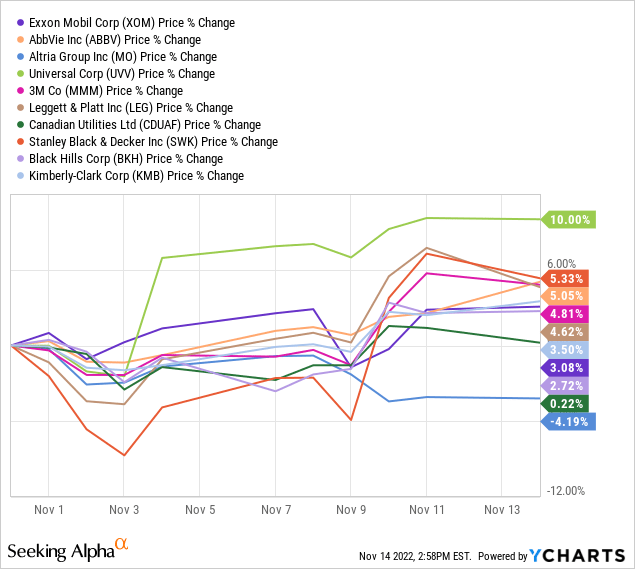 This is an article that, on the surface, simply tells you to hold Exxon Mobil (NYSE:XOM). You should not buy but you should not sell. That’s not the whole story because XOM may be worth buying and may be worth selling. Like most things in life, it depends on your goals.

As a simple but important disclaimer, I hold XOM in my portfolio. It’s a large position. In fact, it might be my largest position, although with the price action these days, it’s not instantly known. My point here is that I think XOM is an excellent business. So, anything I reveal below is meant to clarify the investment, not the business itself.

Before we really dive in, I would like you to consider what I recently revealed here: Exxon Mobil: If You’re Selling, Then Maybe Buy These 7 Dividend Kings.

For very fast reference, I explained that some investors might want to consider trimming XOM in favor of one of these companies:

I won’t waste time here explaining why this could make sense. Read that other article for the details if you’re curious. That said, it’s been about two weeks since I wrote that article. Here’s how it’s played out, simplistically, in terms of price action:

Now we have enough to proceed.

Early November wasn’t great. There were a couple of bad days but nothing really bad. However, November 10th and 11th were kind of awesome. Here’s exactly why:

Wall Street’s major indices staged their best rally of the year on Thursday after data showed core and headline consumer inflation were weaker than expected in October, fueling hopes that the Federal Reserve could slow down its aggressive path of rate hikes.

Inflation is still hot. But, it’s a little bit less hot and that’s good news. The market seems to have started thinking that maybe The Fed doesn’t need to be as aggressive with rate hikes. That matters. If interest rates aren’t so high, then stocks will start to look more attractive, especially growth stocks.

We can get a bit more granular with this:

The CPI data sparked off hopes that the Federal Reserve would slow down its aggressive rate-hike path. According to the CME FedWatch tool, markets are now pricing in a 85.4% probability of a 50-basis-point hike at the central bank’s policy meeting next month, up from a 80.6% probability just earlier in the day.

What’s interesting to me is that only MO didn’t benefit. CDUAF barely moved. All the rest of the stocks were lifted. Yes, of course that also means our friend XOM. Boiling it down, XOM was neither disproportionally punished nor rewarded by the CPI news.

Why Didn’t It Fall Off The Cliff?

A key thesis is that XOM is winning because it’s an inflation hedge. But, the lower inflation signal didn’t matter much. We’ll come back to that in a minute. First, here’s the idea to drive it home:

If you want to know what to own during inflation, know one word: Oil.

Wells Fargo found the price of oil to jump more than 40% during inflationary periods since 2000. It surely tops the 10% inflation-period gain of U.S. large stocks like the S&P 500.

Oil’s inflation-times rise is also more than any other major asset class the bank looked at. Oil’s gain during inflationary periods is also roughly three-times higher than the average 12% rise of all 15 assets Wells Fargo studied.

OK, sure, sure, that analysis from Wells Fargo came out in June 2022. But it’s generally the right idea, which is why I posted it above.

In large part, however, The Fed and the general economic inflation story is very much about demand. When prices go up, there’s generally less demand. That’s basic economics. But, in the real world, oil prices are very messy. For example, there’s global demand, not just U.S. demand. China and India are but two quick examples.

There are also expectations of future demand growth, based on economic changes, food production, demographics and far more:

Rising oil consumption reflects rapid economic growth in these countries. Current and expected levels of economic growth heavily influence global oil demand and oil prices. Commercial and personal transportation activities, in particular, require large amounts of oil and are directly tied to economic conditions. Many manufacturing processes consume oil as fuel or use it as feedstock, and in some non-OECD countries, oil remains an important fuel for power generation. Because of these uses, oil prices tend to rise when economic activity and in turn oil demand is growing strongly. Many non-OECD countries are also experiencing rapid growth in population, which is an additional factor supporting strong oil consumption growth.

All of that can keep prices up but there’s also geopolitical factors. These are often simply represented by watching what various actors are doing:

OPEC on Wednesday cut its 2022 forecast for growth in world oil demand for a fourth time since April and also trimmed next year’s figure, citing slowing economies, the resurgence of China’s COVID-19 containment measures and high inflation.

Nearly everything I provided above is about current and future demand. But, there’s more, and that’s why XOM is still doing just fine.

Here’s what we learned in late October 2022:

Exxon Mobil Corp has made two new discoveries at the Sailfin-1 and Yarrow-1 wells in the Stabroek block offshore Guyana, the oil major said on Wednesday, potentially adding more barrels to one of the most closely watched new oil discoveries.

Exxon did not disclose how much crude oil or gas it estimates the new discoveries to contain.

Guyana amounts for one third of the crude discovered in the world since Exxon first hit oil in the country in 2015, according to Rystad consultancy firm. [Emphasis: Author]

So, while demand moves up and down, at long as prices remain relatively high, XOM will generally make more money. That is to say, assuming an average increase in prices over time, or at least price stability, XOM is bringing more oil to the table.

XOM is supplying more so they are making more money. Here’s the first extra piece of data about this:

As my grandfather used to say, more is more. But, if we ignore prices for a moment – especially gasoline pump prices – and focus on actual supply, it gets easier to see what’s really going on with XOM.

Finding, developing and producing new supplies of oil takes many years and costs billions of dollars. That oil then needs to be processed at a refinery. Today, most U.S. refineries are running at or near full capacity, processing all the oil they can possibly handle. However, refining capacity has contracted in recent years due to the pandemic, government policies or other economic pressures. [Emphasis: Author]

I bring all of this up because of this essential fact: demand can move suddenly, even violently, but supply is far more difficult to manipulate, especially to the upside. You can’t do it quickly and cheaply. Only those companies with a long-term view, like XOM, can handle this volatility.

In large part, this is the XOM “secret sauce” of success. Just ignore XOM’s price for a moment and consider what the business has done, through thick and thin:

Please don’t get me started about windfall taxes, or lack of investment, or giving back to consumers, or price gouging. While XOM isn’t exactly a cute fuzzy wuzzy teddy bear, it’s making our world of energy… actually happen.

XOM appears expensive in terms of price. The dividend yield is down. Some investors might wish to pocket some profits and move on. I think selling out entirely is foolish, but a trim could make sense if you can find higher yields, if you need the income. There’s not a perfect alternative.

If you’re buying right now, then you’re not really getting any kind of special deal. That ship has sailed. The really easy gains are behind us, at least for now. Of course, a drop could happen but that would likely be from the entire market taking a hit, pulling XOM down too.

Therefore, simply holding isn’t a terrible idea. On the one hand, you are getting over 3% to hold XOM. Plus, that dividend is likely to increase. Those increases may or may not beat inflation. My crystal ball is too fuzzy. But, at least you know you won’t be crushed by holding XOM, even if it’s mostly for income. Yes, holding is perfectly rational.

Finally, holding also makes sense because we’ve been given a sign that even with lower inflation, XOM might hold its value a while longer. Maybe much longer. In fact, it should rise over time. Demand will meander upward here in the U.S. but also around the world. Supply needs a lot of time to catch up. We’re talking about years. Therefore, XOM has good room for actual business growth, even if price action doesn’t quite keep up. Time will tell.

Leave comments if you feel strongly, especially if I’m missing something critical. And above all, peace and love to you, and your family. Prost!