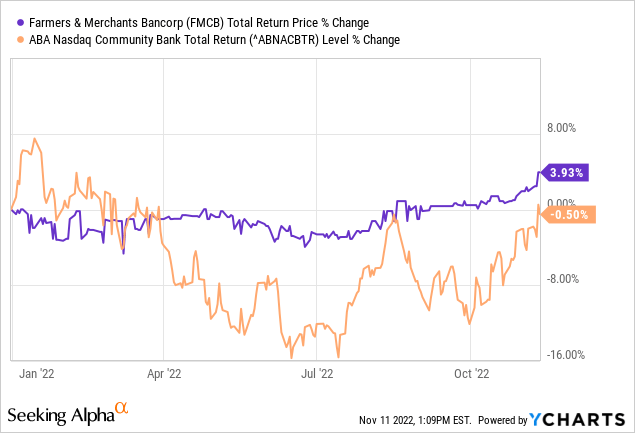 With interest rates rising, core loan growth coming in strong and credit quality still holding up fine, these aren’t the worst times for the income statements of asset sensitive smaller banks like Farmers & Merchants Bancorp (OTCQX:FMCB) (“F&M”). Stock returns have been a bit more pedestrian – though I guess that isn’t so bad set alongside the performance of broader equities this year – and F&M has roughly held its own so far in 2022.

F&M doesn’t provide a detailed break-out of its interest rate sensitivity like most other banks, but between the nature of its deposit base, loan mix and past performance it was a fair bet to assume it would get a nice bump from recent rate hikes. That is indeed showing up on the income statement, with the bank tucking away record levels of net income in both Q3 and year-to-date.

Talk of a recession has obviously grown louder in recent quarters, though a domestic downturn might not quite be the slam dunk it appears. F&M’s agricultural bent probably puts it on a slightly different economic plane in any case, while credit quality has always been a standout feature of the bank as well.

With that, I’m maintaining a ‘buy’ rating on this one. These shares don’t look especially cheap on P/TBV basis, though I will reiterate from my last piece that there are some mitigating features here that justify a premium valuation.

A Winner From Higher Interest Rates

A strong core deposit franchise (around 36.5% of its $4.9B deposit base is non-interest bearing) and loan mix (circa 45% adjustable rate) meant that there was a good chance that F&M would be one of the better-placed banks in a rising interest rate environment, and financial results released year-to-date back that up. Net interest income in the nine months ended September 30 was $137.4m, up 15% from $119.7m over the year-ago period, while third quarter NII was $50.5m, an increase of over 28% year-on-year and just under 13% versus Q2.

Looking under the hood, NII growth was a function of a rise in interest earning assets (up 11% year-on-year and 0.8% sequentially to $5.1B), while the bank was also able to leverage its strong core deposit franchise to produce higher margins. F&M’s funding rate was just 0.1% in Q3, 1bp higher than in the year-ago period and 2bps higher sequentially, while the yield earned on its investment securities (1.96%) and loans & leases (5.06%) was up 20bps and 39bps year-on-year respectively. Net interest margin was 3.95% in Q3, up from 3.26% in the year-ago period and from 3.53% in Q2.

Loan growth has been robust so far this year, with core loans (i.e. excluding PPP balances) up 4.5% year-to-date and 9.5% year-on-year. I do expect this to moderate a bit moving forward due to a cooling economy, though higher rates will continue to be a tailwind for revenue via higher net interest margins.

Credit quality is perhaps a more interesting topic. F&M obviously has a history of running a very tight ship – you don’t get to be a Dividend King as a bank without a solid long-term track record on lending practices – so it will be interesting to see how it performs across this cycle. The bank’s Central Valley base in and around Lodi and Modesto is obviously quite skewed toward agriculture, and that perhaps puts it on a slightly different economic plane versus peers.

That said, agriculture lending has declined a bit as a proportion of the total loan book since the last financial crisis (around 29% today versus over 35% back in 2009), and it will be interesting to see whether the bank’s expansion into the East Bay area opens it up to the tech downturn currently taking place. I’m not overly concerned – provisioning is solid (the loan loss allowance is at circa 2% of total loans) as its capital position – though it may be something to keep an eye on over the next few quarters.

Shares Still Worth A Look For Long-Term Accounts

F&M stock currently trades for around $975 per share, putting it at around 1.65x TBVPS and largely unchanged on my first article covering the bank in April.

That doesn’t look particularly cheap given F&M’s profitability profile, though I will reiterate the point I made last time that special consideration should be given to the bank’s strong across-the-cycle profitability. F&M has clocked in a low-teens average return on equity over the past fifteen years – a period that incorporates the last major economic downturn – while growing TBVPS at a circa 9% CAGR over the same period. These shares aren’t really suitable for shorter-term trading given their low volume on the pink sheets, but for long-term accounts they remain a reasonable value. Buy.