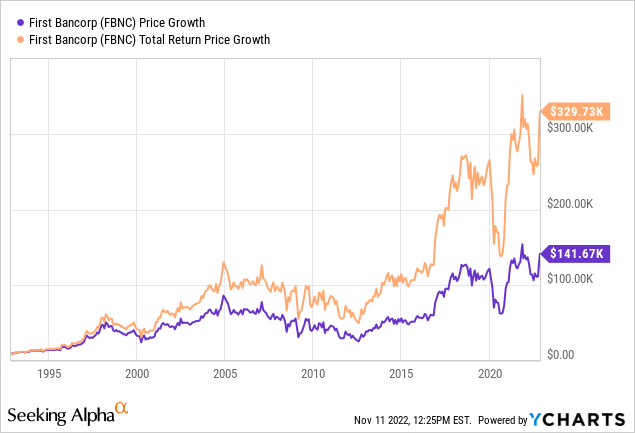 First Bancorp (NASDAQ:FBNC) is a regional bank hailing from Southern Pines, North Carolina, in-between Fayetteville and Charlotte. Like many regional banks, First Bancorp flies under the radar. For example, the article you’re now reading is the first in-depth article about the bank on Seeking Alpha since 2017.

Despite going five years without primary coverage on this website, however, it’s hardly some tiny operation. The bank has a market cap of almost $1.7 billion and its total asset base surpassed $10 billion in 2021. Admittedly, the company’s name might limit interest. By my count, there are at least nine different U.S. banks with some derivation of First Bank or First Bancorp that are publicly-traded. What makes the North Carolina iteration stand out?

When examining a bank I haven’t previously done due diligence on, the first thing I look at is its long-term track record. Specifically, it’s a great filter to see whether a bank has generated strong full-cycle total returns and whether it made it through 2008 in one piece or not. A bank that destroyed shareholder value in 2008 might not be able to make it through the next recession in flying colors, either. Meanwhile, a bank that generates poor long-term returns might be too conservative or not have strong enough profitability metrics to ever justify your investment capital.

In the case of First Bank, however, it has passed both tests with ease. Here is a long-term chart. If you had invested $10,000 in FBNC stock 30 years ago today, here’s how it turned out:

Based purely on capital gains, shares are up almost 15x, with that initial $10,000 turning into $141,670 today. With dividends, however, that initial investment leapt more than 30x to $329,730. And, as the chart shows, the 2008 financial crisis didn’t destroy shareholders’ gains. Yes, the stock was essentially flat between 2005 and 2015, but there was no permanent impairment of capital and the stock has gone on to deliver another series of strong returns in recent years.

What has driven this strong performance?

It’s a combination of above-averaging lending spreads and steady growth. Up until 2020, First Bancorp was earning a net interest margin of at least 4%, and sometimes even higher than that. This was well above the national bank average which was in the low 3s.

On top of that, the bank has been a consistent asset growth story. It has grown loans at 10%/year compounded over the past decade, and deposits at almost 13%/year. Grow your operations at a double-digit clip and earn above-average loan yields, and good things tend to happen.

The one less encouraging sign, however, is that the bank’s net interest margin has slumped in recent years, falling from 4% in 2019 to as low as 2.7% in Q1 of this year. Not surprisingly, this has dragged down the bank’s return on equity “ROE” significantly, with it slipping under the 10% mark in some recent quarters. However, the bank’s recent stumbles appear to be ending.

Are Past Returns Repeatable?

It’s important to realize that First Bancorp has somewhat changed its strategy over the years. The company started off as a more rural-focused bank in nature and largely avoided larger cities in North and South Carolina. However, the company acquired two other failed banks during the aftermath of the 2008 financial crisis through FDIC-assisted transactions. This set the bank on a path toward competing more in bigger urban areas. The bank also brought in a new CEO, Richard Moore, in 2012.

While First Bancorp’s stock returns were underwhelming during this transition period, the bank appears to have successfully adapted to its more growth-focused business outlook. Today, it is the fourth largest bank headquartered in North Carolina.

There are several levers for additional growth going forward. One is that the company has a strong deposit base, and currently has far more deposits than loans. As of last quarter, it is at $9.2 billion of deposits against just $6.5 billion of loans. This gives it plenty of room to make additional loans into this more favorable interest rate environment.

First Bancorp is also continuing to use M&A to bolster its outlook. The latest move is to pick up GrandSouth Bancorporation. GrandSouth is a wholly South Carolina firm with eight branches across the state. Up until now, First Bancorp’s branches in South Carolina were all right next to the border. This acquisition will give them a footprint reaching on down to Charleston. The combined bank will serve all ten of the Carolinas’ largest metro areas and have a branch within reach of 61% of the Carolinas’ population.

Valuation on the deal seems fair, though it depends on your view of valuing a bank. First Bancorp is paying 1.8x tangible book value for GrandSouth, which might seem steep. However, that works out to just 7x trailing earnings (ex-cost savings) which is hardly too aggressive. Overall, First Bancorp sees this as high single digit accretive to earnings while having a three year payback period on tangible book value.

After two years of fairly underwhelming results from First Bancorp, things got back on track in Q3. The bank’s net income leapt 37% year-over-year to $37.9 million. Return on average common equity got up to 13.8%, up 191 basis points year-over-year and getting the bank back toward its historically above-average results. Net interest margin also surged 37 basis points year over year to 3.4% as the bank started to really get a boost from higher interest rates.

The company’s efficiency ratio, which measures a bank’s expenses versus income, has improved markedly in recent years, sliding from 69% in 2015 to just 48% this past quarter (lower scores are better). A typical U.S. bank tends to run in the 55-60% range, so First Bancorp has gone from relatively inefficient to a best-in-class operator in recent years. This greatly improves the bank’s baseline profitability and could lead to unexpectedly strong results going forward as higher interest rates really start to boost the bank’s operations.

North Carolina is a good place to do business as a bank. The state was the sixth-fastest growing out of the 50 American states between 2010-20 as per census data. CNBC has ranked the state best in the nation for doing business, and it enjoys a corporate tax rate of just 2.5%.

First Bancorp appears to be making the most of this favorable operating environment. It has posted strong growth numbers historically. And its current moves, such as the GrandSouth merger, appear likely to continue that trend. Meanwhile, thanks to the strong low-cost deposit base, First Bancorp should be able to greatly improve its net interest margin in coming quarters thanks to the current higher interest rate environment.

The potential hang-up here is that FBNC stock has already rallied significantly; shares are up 27% over the past six months. In a bear market, it’s not as exciting to chase stocks after they’ve already rallied. That said, shares are at 11x 2022 earnings, and likely to be sub-10x forward earnings as the GrandSouth merger and higher interest rates add another element to the company’s earnings outlook.

I rate shares here as a “buy” rather than a “strong buy” simply due to relative valuation. There are so many stocks that have been absolutely walloped over the past year. First Bancorp, by contrast, is flat for 2022-to-date and is less than 10% off its all-time highs. Both in banks and the market as a whole, there are more timely bargain-shopping opportunities.

That said, 11x earnings is hardly an expensive price for a proven growth bank like this, and management is making the right moves to keep the ball rolling. I expect shareholders to be satisfied with the bank’s returns in coming years.