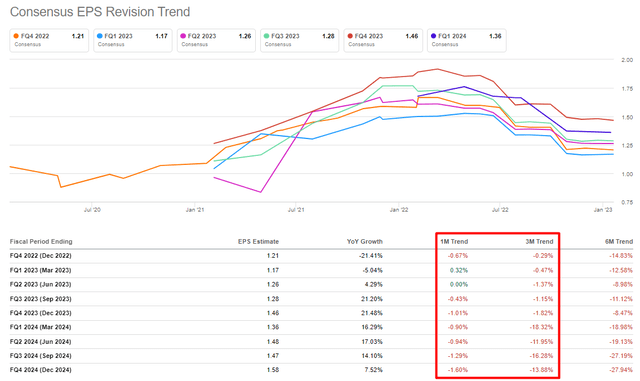 About 2 months ago I published an article on Google (NASDAQ:GOOGL) exposing the misleading information that insiders were actively buying stock. At the time, I advised against buying Google stock and spoke of the high downside risks to EPS forecasts shortly. History has proven me right – EPS and revenue have actually declined slightly in recent months, according to Seeking Alpha data:

Google stock reacted by continuing its correction. After the rally last week, the share price has not actually moved from its place in the last 2 months.

Today, I decided to dedicate a separate article to what I consider a turning point for the company – the layoffs that were so necessary. The inflection point I am talking about is a clear bullish sign that it’s finally time to buy GOOGL at a fraction of the desired total position – even selling covered calls could work well at this price point.

Why Do I Think So?

Everyone is talking about how FANGMAN companies have been laying off their employees all over the place in recent months. In total, more than 200,000 people in the tech industry have lost their jobs since the beginning of 2022, according to calculations by Dan Saffer from the CMU Human-Computer Interaction Institute. However, it seems to me that we should look at this news in the context of the time before COVID:

Many companies, after financing became virtually free for them [post-Covid period], began to actively inflate their staff and take on projects that promised no break-even for years to come. The table above shows that the average staff increase since 2019 is over 62% – in just 3 years! Layoffs of 10,000 to 18,000 employees, some of whom spent half of their workday increasing administrative costs by eating free food and loitering in work cafes, account for an average of 22% of the total staff increase – which is still quite modest.

In case you were wondering, this is how the above companies’ sales and net income per employee looked like in FY2019 and FY2022:

Google proved to be the absolute top performer among the mega-cap stocks analyzed, and using Amazon (AMZN) and Meta (META) as examples, we can see that the increase in staff did not necessarily lead to a qualitative increase in the bottom lines.

I expect that reducing the number of employees and abandoning expensive projects with long durations will make it possible to a) maintain the current ratio of sales per employee across the sample and b) increase the ratio of net income per employee. If that’s the case, then Google’s lead in terms of these unit economic metrics will only increase [Microsoft (MSFT) takes an honorable second place].

Google’s business model looks like one of the most recession-proof in the current reality compared to most other FANGMAN companies. Of course, when times get really tough, corporate marketing budgets can shrink significantly. However, I suggest focusing on 2008 as a possible point of reference – then there was a hard landing with consequences that are difficult to repeat today. That year, Google reported a full-year EPS of $0.67 per share, down just 1.47% from the FY2007 figure. According to Seeking Alpha, the consensus now assumes a -12.54% decline in EPS in FY23 – the effect of the high base of the “free money period” can be seen.

To date, I expect these EPS estimates to decline even further as major investment banks incorporate the impact of MSFT’s ChatGPT into their forecasts, further reducing Google’s market share in the search business.

However, the impact of ChatGPT seems to be exaggerated, considering how Google is valued today – perhaps the worst forecasts are already in the share price, and perhaps the fall from the start of a recession in 2023 will not be as severe as many bears expect.

As UBS analysts – Lloyd Walmsley, Karl Keirstead, and others – write in their recent research report on the U.S. Internet [January 16, 2023], Google does not appear to be lagging behind OpenAI from a technology perspective. In fact, the bank’s research and reviews found that Google’s LLM [Pathways Language Model – PaLM] technology is best in class, but the company has not yet made it available to the public in the same way that OpenAI has.

Key reasons to think Google is a leader here include:

So today it is too early to say that Google is being disrupted by ChatGPT. From Morgan Stanley’s report [January 10, 2023], I learned that ChatGPT’s cost per search query today is about 7x higher than Google’s – and that’s even if you include some of the CAPEX in YouTube and the cloud in the analysts’ calculations.

Let’s DCF it all

If Google incorporates the above developments into its search engine and 10% of users switch to AI/NLP queries, the company’s EBIT margin is likely to drop by about 150 basis points by 2025, according to calculations by MS, precisely because AI/NLP is significantly more expensive. I believe that if cost management continues to improve – perhaps through further layoffs of positions that are not that significant for the operational part – Google will be able to avoid severe pressure on its margins and continue to fight for its market share.

I propose to incorporate fairly conservative assumptions about Google’s profitability into the company’s valuation model. Let us assume that Google will grow its revenue by only 8% in E2023; in E2024, E2025, and E2026, annual revenue growth will be 15%, 12%, and 10%, respectively. This is more or less in line with analysts’ consensus forecasts (in fact, my forecasts are slightly lower and more conservative).

The ratio of CAPEX to sales will fall to 9% in E2023, after which a new upward cycle will begin, ending with a slight decline in E2026. This is how I see investment cycles – CAPEX falls and rises depending on how the economy is doing. This is a dynamic ratio, not constant:

Calculating WACC is always quite tricky – there are too many assumptions that need to be taken into account. The main thing here is to reconcile the result with common sense. I make the following assumptions when calculating WACC:

I receive 8.4% – quite reasonable in my subjective opinion.

The final output of my model looks as follows:

Gordon’s growth model [based on g-rate] shows a fair price per share of $328.6 at a “g” of 8% and $88.2 per share at a “g” of 7% – so there is too much variance if we focus on the FCF forecast in the post-forecast period. In my opinion, it is much more correct to look at the EBITDA-exit multiple in this case.

Google stock is currently trading at 12.4 times TTM EV/EBITDA, which is about the 2010-2015 low even though the P/E TTM ratio is still quite high:

Google’s forwarding EV/EBITDA multiple is even lower – it’s about 9.9x according to YCharts data. I think Google deserves a slightly higher exit multiple – about 12x. This is already 25-30% below the long-term median of this multiple:

Taking all the above factors into account, Google turned out thus undervalued by 16.26% according to my DCF valuation model:

The premium investors are willing to pay for the company in E2025 will overshadow today’s upside/downside:

The 12x of EV/EBITDA in 2025 seems like a fairly conservative estimate, so Google stock seems to be an attractive investment for me right now.

I am changing my previous Hold rating to Buy, as the company appears to be undervalued in light of the cost optimization measures announced by management. The layoffs were a necessary decision, and their impact should support the company’s margins in the foreseeable future, which will be very difficult for the economy as a whole. This is the most important risk I currently see for the company, as it gives rise to further – already idiosyncratic – risks (decline in CAPEX – > less innovation – > loss of market share). Few believed that Microsoft’s Edge could compete with Chrome – this is now becoming reality.

Like other major technology companies before it, Alphabet has serious antitrust problems. The European Commission has issued adverse rulings and imposed record fines that could increase. The U.S. Department of Justice and many U.S. states have filed complaints against Alphabet’s Google division. Both the U.S. Congress and the European Union have drafted bills aimed at severely restricting Google’s operations, if not breaking up Alphabet. Although it may take years to resolve these issues, Alphabet could one day face strict regulation and perhaps even a forced breakup, as well as further hefty fines. Even the company’s current efforts to comply with recent EC rulings could allow competitors to grab market share.

Despite all the risks, I see the efforts of Google’s management as positive – even with a slight decline in margins over the medium to long term, the company will appear undervalued as investors are willing to pay a small premium for the moat that Google has. It is unlikely that this will change in the future. GOOGL is a Buy with a price target of $115 per share by the end of 2023.

Perhaps the recent breakout from the descending price channel on increased volumes and the intersection with the 200-week line SMA has already set a new trend that will continue: