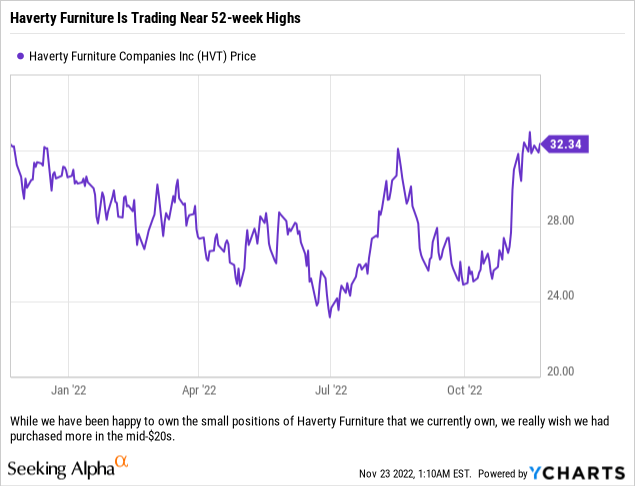 A few months back we wrote an article where we discussed why we were bullish Haverty Furniture Companies (NYSE:HVT) – even as interest rates were heading higher, the housing market was slowing and there was a debate over what the definition of a recession was. None of those items would lead one to believe that any derivative of the housing market was a buy, yet we laid out the case for why Haverty was different. We still believe that the company should have no problems getting through a recession or that the controlling family will one day take the company private. However, we do now believe that the proverbial ‘easy money’ has been made and the only reason to stick around is to get both the quarterly dividend and the special dividend.

What Has Happened Since Our Last Article?

To put it simply, the stock has caught fire. Based on the price at publication of our last article, Haverty’s stock price is up 21.58% as we write versus the S&P 500 which is down 0.49% over the same period. While we are quite pleased with the gains in the various portfolios where we purchased shares, the truth of the matter is that we were ‘nibbling’ and were unable to catch a major pullback into the $20/share area where we wanted to be aggressive buyers. With that said, while we were hoping to be big buyers around $20/share, we did not expect to be forced to decide whether we were sellers around the 52-week high level only a couple of months later.

Also of importance, Haverty’s Board did announce another quarterly dividend along with another special dividend. The ordinary quarterly dividend will once again be $0.28/share and the special dividend will be $1/share. These dividends were announced on November 11th, and importantly will have an Ex-Date of November 25, 2022 and a Record Date of November 28, 2022. December 13th is the date that the dividend is payable to shareholders who qualify.

How Are We Trading The Stock Now?

As of right now we are not doing a thing. We are sitting back and waiting to qualify to collect the dividends. After we qualify for the dividends, we will be exiting the various Haverty Furniture positions we have established in order to lock in 20%+ gains in a rough year – and gains which we must confess we believe have been pulled forward into this year. Ordinarily this would be a much more difficult decision to make as a number of the accounts which own this name are taxable. However, with the market turmoil this year we have plenty of realized losses and/or unrealized losses to offset any short-term gains from this trade in those accounts.

So why exactly are we sticking around for these two dividends? Well, the quarterly dividend is $0.28/share and the special dividend is $1/share, which will total $1.28/share and is actually larger than the annual ordinary dividend. The $1.28/share will provide a yield of roughly 3.96% and we think that the special dividend is small enough to not trigger a sell-off after the Ex-date – meaning we believe that the majority of the total dividends to be received will be larger than any potential corresponding sell-off in the company’s shares.

We still like the company and its prospects and cannot stress enough how much we love the balance sheet. However, this name has moved above our short-term price targets and after the special dividend payout it provides us with only one major reason (LBO or private equity deal) to own the shares (and the timing of a take private event is unpredictable). When one finds themselves in a situation such as this, it is best to take profits and move to the sidelines.

This trade really pains us. It is not a trade where we have some other great idea to rotate into, or one where we loaded up the truck and made huge profits as it moved higher. Instead we are faced with a rather small position in portfolios that has moved up considerably and now we must be sellers based on valuation and potential downside pressures. In the mid-$20s this stock was a buy, around $20/share it would be a screaming buy, but in the low-to-mid $30s the shares certainly appear priced to perfection for the short-term and would require an LBO or some other take-private transaction to provide further major upside. Not saying that a transaction will not happen, just that it is unlikely in the short-term, especially with economic clouds forming.

Selling something to move to cash is not really our M.O., but we do like to make money and by delaying the sell action by a few days we will be able to lock in (at current prices) an extra 3.96% in return based off of the quarterly and special dividends (assuming the stock price remains relatively stable).

Our hope is that we will be able to re-enter this bullish trade should Haverty’s stock price decline back into our areas of interest for buying. We do think that the balance sheet is a key asset for the company moving forward and will prove to be a differentiator in the years ahead – especially if management and/or the controlling family decide to utilize the real estate holdings to leverage up the company in order to do a take private deal or pay out another large special dividend at least 2 years from now. While we want to be buyers on a dip, we have to sell above $30/share as it is the prudent trade and will give us some flexibility moving forward.

For those who followed us into Haverty Furniture and saw the price rise dramatically in recent weeks, it might be time to weigh taking profits at these levels (and after qualifying for the announced dividends) in order to re-enter the trade once the stock cools off a bit and the stock looks cheap on a valuation basis once again.