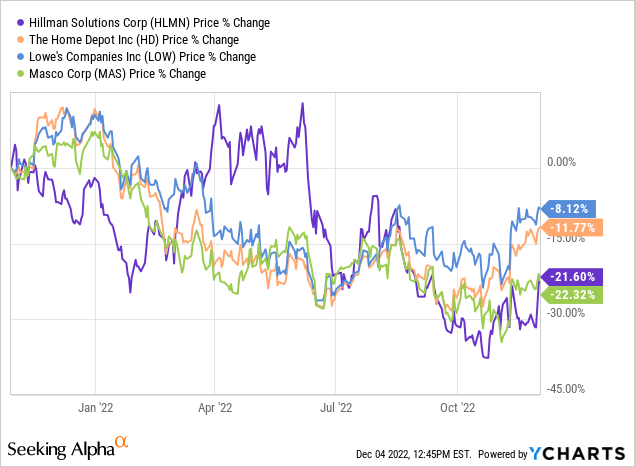 A little over a year ago, I wrote an article introducing Hillman Solutions as a little followed and, in my opinion, undervalued play versus its peers in the home improvement sector. As I noted, HLMN was not a typical de-SPAC company with hockey-stick projections of future revenues. In fact, it is a nearly six decade old supplier of fasteners and hardware to Home Depot (HD), Lowe’s (LOW), ACE Hardware, Walmart (WMT), and other hardware and home improvement retailers.

In hindsight, I underestimated the length and severity of the pandemic and its effect on worldwide supply chains and shipping costs. Furthermore, since I published that article, overall market multiples have contracted, as well as the valuations of Hillman’s larger customers and peers:

What drew me to Hillman was the service model which makes this company so much more than just a manufacturer. The company ships the majority of products directly to customer’s stores and Hillman’s 1,100 sales and service employees directly stock customers’ shelves, ensuring that fill rates are high and the organization and presentation of the products make it easier for shoppers to find what they need. As an experienced DIY’er, I can attest to the importance of well-organized and fully stocked fastener and hardware bins to my satisfaction with the retailer. Importantly, HLMN’s in-store service presence creates a competitive moat. Even a large retailer such as Home Depot is not going to change fastener suppliers to save a few percent on cost if it means using its own employees to distribute, stock and manage shelves for over 100k SKU’s. As the company says in its 2021 10-K:

A typical hardware store maintains thousands of different items in inventory, many of which generate small dollar sales but large profits. It is difficult for a retailer to economically monitor all stock levels and to reorder the products from multiple vendors. This problem is compounded by the necessity of receiving small shipments of inventory at different times and stocking the goods. The failure to have these small items available will have an adverse effect on store traffic, thereby possibly denying the retailer the opportunity to sell items that generate higher dollar sales.

I like that over 60% of the company’s products are what I would call “consumables” such as fasteners and hardware (as opposed to one-time purchases such as a nail gun), and that they represent a small portion of the shopper’s total cost for most projects.

From a macroeconomic perspective, it is important to note that 90% of the company’s business is tied to the repair, remodel, and maintenance market. Hillman does not serve the new home construction market, which is much more cyclical. As was discussed throughout both the Home Depot and Lowe’s 3Q’22 conference calls, the key factors supporting home improvement demand include:

The company’s Robotics and Digital Solutions business accounts for about 20% of sales. This division consists of self-serve kiosks and in-store equipment for key duplication, engraving ID tags, and knife sharpening. While this business experiences cyclicality based on retail store traffic, used car sales, existing home sales, and pet adoption levels (which spiked during COVID), the company owns the in-store kiosks and derives its revenues from selling the keys and tag blanks. This also creates a barrier to entry since a retailer would need a strong reason to replace the in-store equipment with a competitor’s.

Hillman’s actions during the last few years point to a clear focus on the decades-long relationships the company has with customers and suppliers. Lead times for the company’s products, which are mainly sourced from Asia, increased from a pre-pandemic 130 days to a peak of 255 days in January of this year. Current lead times have fallen back to about 160 days from order to delivery at the company’s distribution centers.

Customers rely on Hillman’s direct-to-store and in-store stocking programs to maintain the fill rates of their shelves. HLMN’s response was to invest heavily in additional inventory to meet this demand. Importantly, fill rates on customer shelves remained above 90% at the worst of the crisis and this year are at 96%. Earlier this year, the company won the fastener business at a large retailer because the previous supplier was unable to maintain adequate stocking levels.

The company believes that its latest inventory investment is probably about $140 million more than it would have been under more normal circumstances. While growth of the business means that future levels won’t fall by this full amount, the company is expecting to bring this down a further $25 – $35 million in 4Q’22 and at least $50 million in 2023 and reach normalized levels by year end.

It’s important to also remember that under accrual accounting, given the lead times mentioned above, the highest cost inventories are starting to hit the company’s income statement in the current quarter. It won’t be until the 2H’23 until the currently lower shipping and commodity costs will flow through.

As costs come back down from the extraordinary inflationary levels experienced in 2021 and early this year, the company will work with customers to maintain fair and competitive pricing. The question remains how much of the price increases will be “sticky”. According to Chairman, President, and CEO Doug Cahill on the 3Q’22 conference call:

However, historically, we have not given price back dollar for dollar when inflation cools. Today, we are seeing commodities, container, freight and other costs begin to moderate. We expect to benefit from this dynamic once these lower costs flow through our P&L, which we believe will begin during the second quarter of 2023.

During several other exchanges during the Q&A portion of the call, management pointed out that there is less pressure on the price of fasteners, which are a small portion of an overall project cost as opposed to something like lumber or gypsum. Also, in past times of moderate inflation, they have not given back price increases. However, they also acknowledged that this time is different and they would expect to give back at least the amount by which container rates moderate and probably some commodity costs as well.

The bottom line is that the company used the pandemic disruptions as an opportunity to solidify customer relationships rather than try to improve its own short-term results. This will likely to lead to even greater future customer wins and shelf-space gains, which makes it even harder for even a large big-box retailer to replace Hillman and its valuable services.

I am a little more skeptical about two demand drivers which are sometimes cited, namely, increased stay-at-home lifestyles which are persisting beyond the pandemic and people staying in their current homes longer because relocating would mean taking on a new mortgage at much higher rates than an owner’s current fixed rate.

While these are valid macroeconomic factors, I think it remains to be seen how much of the “stay-at-home” fix up demand has already been pulled forward and could potentially start to wane. Although Hillman is not tied to the new home construction market, slow existing home sales also allow some maintenance projects to be delayed. My own experience is that I have spent more on home repairs when preparing to sell a home and more on improvements immediately after buying a home.

While the business performed very well and our consumer remains resilient, we are navigating a unique environment. We can’t predict how the evolving macroeconomic backdrop will impact our customer going forward.

Despite a challenging environment, I expect HLMN to report full year 2022 adjusted EBITDA of about $209 million at the midpoint of guidance. For 2023, I expect the company to achieve its long-term target cash flow growth of 10% as costs moderate in a slowing macroeconomic environment, bringing it to $230 million for the full year.

The company ended 3Q’22 with net debt of $922 million. Assuming another $30 million of working capital improvement and $44 million EBITDA, net debt at the end of 2022 could fall to $875 million. If another $50 million comes out of working capital in 2023 (lower inventory partially offset by growing the overall business) and capital expenditures reach $75 million to support the growing RDS investments for kiosks, net debt could fall to $770 million by 4Q’23.

The company is trading at 11.7x EV/EBITDA expected for current year 2022 results. For comparison, LOW trades at just under 11x and HD trades at over 13x EBITDA.

Management has not provided 2023 guidance; the above numbers are my preliminary back of the envelope. If I’m correct, then keeping this multiple relatively constant would result in a $10 share price in a year, for about a 25% return from current levels.

This valuation looks reasonable and I own HLMN as part of my core long-term holdings. Recently, Oak Hill Partners and CCMP have been sellers. I believe that this reflects the fact that they have been in the name for many years and are focused on private equity investing. On the other hand, CFO Rocky Kraft recently bought $497,380 and CEO Doug Cahill bought $993,945 worth of shares in the open market.

It is sometimes difficult to see real competitive moats in today’s fast-moving economy. Hillman’s somewhat boring business of supplying fasteners and hardware might at first glance appear to be the definition of an undifferentiated commodity. However, taking a look under the hood at the company’s operations reveals an almost irreplaceable partner to its customers which provides incredible value through its services of direct store delivery and in-store inventory and display management.

I believe that I was early, not necessarily wrong when I put a buy rating on HLMN a little over a year ago. Like most, I did not anticipate the supply chain challenges and costs which the company would continue to face even as it seemed like the pandemic was waning.

If anything, I like the company even more than before after seeing the actions taken by the company to service and support its customers. The long-term thinking, even if it puts stress on short term results, demonstrates the quality of the management team.