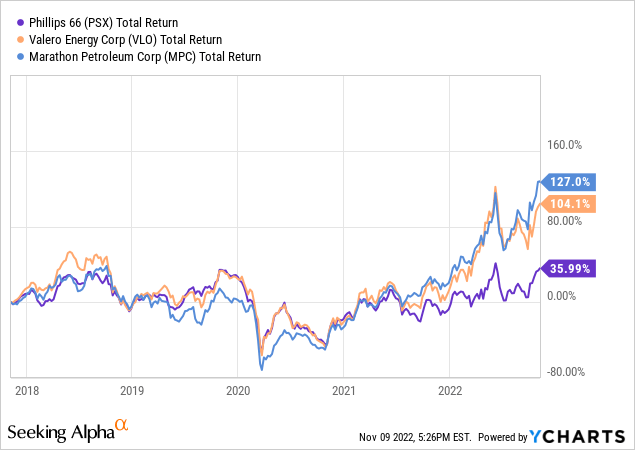 Several years ago, Phillips 66 (NYSE:PSX) began a multi-year strategic plan to diversify away from refining into its higher-margin midstream and chemicals operations. That plan included forming – and then rolling up – its PSXP MLP, which invested heavily in several large-scale pipeline projects. The company also invested in multiple large-scale chemical plants on the Gulf Coast through Chevron Phillips Chemical Corp (“CPChem”), the 50/50 JV between PSX and Chevron (CVX). The strategy was intended to lift the company’s overall returns and thereby earn it a market premium as compared to pure-play refiners. However, as can be seen by the graphic below, PSX’s total returns have severely lagged those of its peers Valero (VLO) and Marathon Petroleum (MPC) over the past five years:

Yesterday, Phillips 66 held its “Investor Day 2022” gathering yesterday – its first since Mark Lashier took over the president and CEO job in July. In my opinion, there were several key takeaways from the presentation:

Change At The Top

Before delving into the details of the presentation, let’s spend a moment discussing how we got here. As most of you know, Greg Garland was the only CEO PSX has had since its spin-off from ConocoPhillips (COP) in 2012 until Lashier took over in July (Garland remains Chairman of the Board). It was under Garland that the company put its refining business into relative “maintenance mode” while investing heavily into higher-margin midstream and chemicals. Garland’s strategy was supposed to raise returns and give the company a market premium over the pure-play refiners. Arguably, the chart above shows that strategy did not work out as planned. That said, Garland grew the dividend at a CAGR of 18% during his tenure, so hats off to him for that.

Enter new CEO Mark Lashier – who has more than 30 years experience in the energy business and began his career as a chemical engineer doing research (13 patents) for Phillips Petroleum. He later served as president and CEO of CPChem from 2017-2021. Most recently, and prior to becoming president and CEO, Lashier had been serving as president and CEO for the company.

PSX’s strategy going forward is shown in the slide below, which was unveiled during the “Investor Day 2022 Presentation“:

I found the strategic plan to be straight forward, logical, and long overdue. I say that because – as pointed out earlier – PSX’s returns have severely underperformed its more refining centric peers (VLO and MPC) for years and it was supposed to be the exact opposite given its big investments into (supposed?) higher-margin midstream and chemicals segments.

That said, note that PSX has been awarded a higher market multiple as compared to its two main refining-centric rivals:

However, no matter the multiple, if the rivals can grow earnings faster (right column) you end up with the first graphic in the article (i.e., PSX’s total returns are, by far, the worst of the three). That being the case, the focus going forward has to be on boosting earnings, and we see that reflected in the strategic plan’s focus on cost reduction and margin enhancement.

I’ll start with this instead: If investors take it for granted that full-cycle returns in midstream and chemicals are higher than refining, then PSX obviously must have some challenges to make its refining assets much more cost efficient. That being the case, let’s start by taking a look at “Job #1” for PSX going forward:

Back in 2018-2019, PSX’s refinery capacity utilization rate ran 2%-4% higher than the U.S. refining sector’s average (~94%). Since the pandemic, PSX has been running 2%-3% lower that the industry average. In a high-volume manufacturing environment like refining, capacity utilization is key to overall efficiency and profitability. So, PSX’s first job is to increase its overall capacity utilization rate. On that front, I would note that the company already has closed its Alliance refinery, one that had been whacked badly by two hurricanes and was responsible for lots of downtime and maintenance expense over the last five years. So, that’s behind them now, and that’s a good thing.

The other issue to consider is that PSX has a relatively higher distillate yield as compared to peers due to having more coking capacity. That being the case, it could be that PSX is currently optimizing feedstock to maximize distillate production – not for overall refinery utilization. I say that because, currently, diesel margins are much higher than gasoline. Anecdotally, where I live for example, diesel is $5.45/gal and regular gasoline is $3.39. As a result, PSX is recently on record that it’s “maximizing diesel” as it’s a competitive advantage for the company to do so (even if overall capacity utilization was to run a bit lower).

Regardless, part of PSX’s plan is to increase its capacity utilization rate by focusing on two major initiatives:

In addition, PSX’s Refining Segment has more issues to address than its capacity utilization rate. The biggest is, and has been, its market capture. Consider the company’s most recent Q3 realized margin:

As shown in the lower left of the graphic above, the Q3 2022 average market 3:2:1 crack-spread during the quarter was $36.29/bbl. On the right side, we see that PSX’s realized margin was only $26.58/bbl – or only 73% of what the market opportunity was. That’s poor, especially given that PSX has a large slate of heavily discounted WCS crude from the Canadian oil sands. As shown in the waterfall, a big headwind is due to PSX’s rather fixed refinery configurations, which although average in the top 30% in the U.S., “lost” $3.45/bbl in Q3 as compared to the market. Without major refinery re-designs (i.e., significant investment and downtime), it’s hard to see how much can change in that regard.

What should be a much easier win for PSX is on the “secondary products” front, which were a $3.50/bbl drag in Q3. PSX says it plans to utilize digital monitoring and AI/ML algorithms to optimize process unit performance and unit flexibility in order to ultimately achieve higher refined product prices. I am optimistic that the company can make significant improvement in this area.

Bottom line in Refining: PSX management has committed to increase its market capture by 5%, raising annual returns by an estimated $400 million. In addition, PSX plans to reduce its refining segment’s overall structural costs by $0.75/bbl, which it believes will help it deliver $500 million in annual cost savings.

This initiative is centered on the Midstream Segment, but also impacts Chemicals as well. Again, the strategy is relatively straight-forward:

Management points out that NGLs demand is growing faster than oil demand and that the DCP transaction was a transformational moment for the company. PSX is now in control of DCP’s pipeline and midstream assets all the way from the well-head to the markets on the Gulf Coast: Including its own Freeport LPG export terminal and CPChem chemicals plants, for example.

The company plans to save $1 billion annually by year-end 2023 through:

The three categories discussed above are at the core of PSX’s plan to increase shareholder returns. And it is focused on cost-reduction and margin enhancement – primarily in the Refining Segment and by integration of DCP assets. Maintaining a strong and flexible balance sheet is – of course – important, but a relative given for any company and nothing new.

The slide below is what CEO Lashier said was the most important slide of the presentation because it summarizes the commitments he and his management team made to shareholders:

The company has committed to return $10-12 billion in distributions (dividends and share buybacks) from mid-2022 to year-end 2024. At the midpoint ($11 billion), that would equate to an estimated $22.77/share based on the ~483 million shares outstanding as of Q3 quarter end. Or, looking at it from a slightly different perspective, $11 billion equates to 22% of PSX’s current $49.7 billion market cap.

The company is going do that by growing adjusted EBITDA by $3 billion by 2025 (from $7 to $10 billion). There’s a pretty clear line-of-sight to reaching that goal considering DCP alone is going to be a $1 billion uplift. In addition, we have the ~$1 billion in estimated annual cost savings, improved efficiencies, margin enhancement, and reduced sustaining cap-ex. The remaining $1 billion will come from Rodeo Renewed ($700 million) project, Frac-4 (which has been running above capacity since going online last month), and chemicals.

The biggest unknown, in my opinion, is the company’s ability to improve refining market capture. That has been a challenge for years without a whole lot of visible progress in my opinion. However, I have never seen the organization more focused on the issue – likely because they’re somewhat embarrassed by being continually and significantly outperformed by its peers.

As a long-time Phillips 66 shareholder (I received my shares via the spin-off due to my shares in ConocoPhillips), I was impressed by the presentation and management’s clear commitments to its goal and to shareholders. CEO Mark Lashier has certainly got the troops focused on higher shareholder returns and if he can deliver on those commitments by year-end 2024, PSX shareholders should see returns of at least 20% through distributions alone. In addition, the market should value the shares higher going forward because the cost-reductions and improved efficiencies should last and, finally, give PSX the kind of EPS growth potential that were promised with the large-scale investments PSX made in midstream and chemicals over the years.

Trading in the stock yesterday was interesting. Note that market had a very bullish reaction to the Investor Day Presentation, which began at 8:30 am EST. At one point the shares were up over $3, before falling $1 as the overall market plunged later in the day:

I reiterate my BUY rating on PSX due to the current bullish refining environment, especially for diesel – a competitive advantage for Phillips 66. Based on the presentation, management’s commitment to shareholder returns, and current EPS estimates of $19 this year and $12.90 next year, my 12-month price target is $120/share (7.5x the average EPS of ~$16). Combined with the company’s current $3.88/share annual dividend ($3.73% yield), that would be a total return opportunity of ~19%.

I’ll end with a long-term price chart of PSX and note that PSX was at $120 prior to the pandemic, and several large-scale projects have come online since. That being the case, my $120 price target looks rather conservative. However, given the global macro-environment (war in Ukraine, high inflation, rising interest rates, etc), it seems prudent to tamp-down expectations. Longer term, I remain very bullish on PSX’s potential for out-sized market returns.