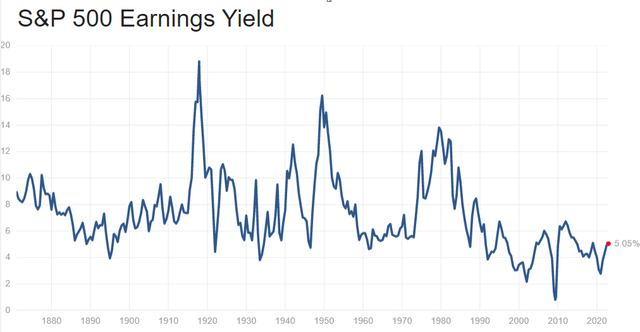 Let me begin by asking what should be an easy question: What is the forward multiple of REITs?

Unfortunately, there is no agreed upon answer. There can’t be an answer because there has never been an agreed upon methodology for calculating it.

If you ask the same question about the S&P 500, the answer can be found within a few seconds with a simple Google search.

For quite some time the index committee for the S&P and Dow indices has agreed upon a standardized methodology for the earnings multiple of the S&P index: It is the market cap weighted harmonic average of earnings multiples for the constituents of the index.

What does this mean?

It can be difficult to discern whether REITs are a good deal relative to the S&P as there is no agreed upon multiple at which REITs trade.

Making matters even more challenging is the fact that REITs have their own jargon, their own earnings metrics and their own index.

As such there is no clear way to discern whether REITs or the broader market is a better value.

I propose the following solution:

Standardize the REIT index using the same methodology for calculating earnings multiples. Here is the information we need:

There are 144 REITs that have consensus FFO estimates for 2023. Each can be found in the table below.

From this information we can find 4 different FFO multiples for the REIT index depending on calculation methodology. In particular I think it is valuable to look at both cap weighted and equal weighted as well as straight averages versus harmonic averages.

However, if you use either of these multiples you are substantially underrepresenting the value REITs present relative to the S&P.

Since the S&P uses a harmonic average in calculating its PE multiple, we should do the same for REITs. This gets a harmonic multiple of 14.89x when market cap weighted or 10.3X when equal weighted.

The results of our analysis are summarized in the table below.

The market cap weighted harmonic average P/FFO is highlighted in green because that is the methodology most comparable to the S&P.

It is this 14.89X REIT multiple that we can compare to the 19X of the S&P. Consensus estimates range from roughly 200 to 230 for 2023 S&P earnings so at current pricing you get the following multiples.

In comparing REITs to the S&P one must also understand the difference between Funds From Operations (FFO) and earnings.

FFO is defined by the National Association of Real Estate Investment Trusts (NAREIT). It is a standardized set of adjustments from GAAP net income that are designed to make FFO closer to runrate earnings. Below are the main adjustments

The challenge with real estate in GAAP accounting is that the earnings profile is extremely lumpy which contrasts with the experience of the owner in which the cashflow stream is quite steady.

Consider a building with 30 years of contractual rent. The cashflow is straight line, but over those 30 years GAAP depreciates the building to $0 so GAAP earnings will be exceedingly low. However, once that building is sold it will be sold against the $0 cost basis causing an enormous GAAP gain.

This makes earnings hard to track because in no period do they reflect the actual cashflows and actual profits. To clean up the reporting, REITs add back that depreciation and do not record the gain on sale for FFO.

As a quick example we can look at City Office REIT (CIO) which sold a large portion of its property portfolio. Looking at GAAP income, depreciation eats up most of it but in 4Q21 they gained $433 million, most of which came from gain on sale of property.

FFO was much smoother at about $13 million to $15 million per quarter.

It is unclear. In the case of CIO its GAAP earnings dwarf its FFO indicating that each dollar of FFO is more valuable, but in other cases FFO might be larger than GAAP.

The main equation driving whether $1 of FFO or $1 of earnings is worth more is whether appreciation is greater than or less than maintenance costs. It comes down to property type, location and fundamental trends. Overall, I think it is quite close.

As such, I think FFO multiples and earnings multiples can quite reasonably be compared on a 1 for 1 basis.

When we adjust index multiple reporting methodologies to be equivalent, REITs are trading at 14.89X while the S&P is trading at 16.6X-19.1X (depending on which 2023 estimate you use).

REITs appear to be a significantly better value than the S&P at current pricing.