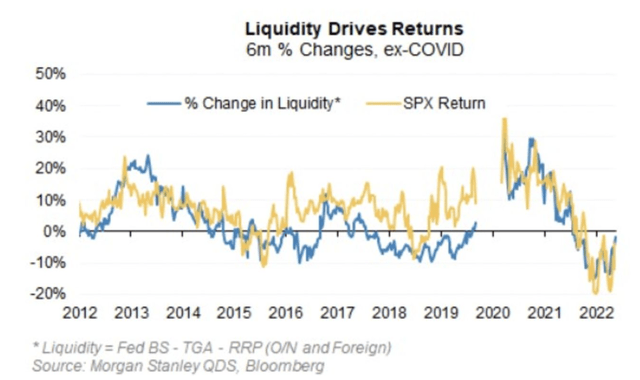 When Good News Is Bad News

A few times this year, strong employment reports have been met by panic selling from traders fearing more Fed hikes. This phenomenon is known to traders as “good news is bad news.” If it sounds like it’s an unsound way to invest your money – it’s because it is. But in a QE-addicted world post-pandemic, liquidity has taken the reins from economic growth as the most important driver of stock returns. This mirrors the trade in early 2021 when virus cases would jump and traders would go buy all the work-from-home stocks like Zoom (ZM), and sell oil stocks like Exxon Mobil (XOM). In the end, the fundamentals won out, and despite Zoom briefly being valued for more than Exxon during the pandemic, they’re no longer in the same ballpark. Profitable companies are almost all up from pre-pandemic levels, and many money-furnace work-from-home stocks are now down 80% or more. These weird trading patterns have now returned. With the end of QE and the start of QT as the Fed vacuums money out of the system, speculative junk gets a big bid anytime someone says the word “pivot” on television!

To this point, it probably hasn’t mattered much to your performance in 2022 whether you found great businesses to invest in. Almost everything is down substantially because most starting valuations were irrationally high, and the Fed is now hiking rates to try to bring inflation down. Analysts for Morgan Stanley have estimated that the liquidity drain will pull stocks down another 8% by year-end and 15% by March. Bank of America analysts have pegged the liquidity drain as dropping stocks by 7%. And then, of course, you have people like Dr. Michael Burry from The Big Short, who recently tweeted “you have no idea how short I am.” I don’t work for Morgan Stanley, and the closest I’ve ever come to setting foot on Wall Street is going to some Lower East Side dive bars. But Burry and the bears undeniably have a point here. Anyone objectively looking at these weird day-to-day correlation trades and the idea of “bad news is actually good news” can see right through it.

This takes us to the nonfarm payroll report at 8:30 Eastern Time on Friday, which is expected to show that the U.S. economy added 200,000 jobs in November. That’s a lot of jobs, and it’s well in excess of US population growth. If the economy does indeed add 200,000 jobs in November, there will be about 153.5 million employees on payroll in the US, exceeding the high of 152.5 million employees pre-pandemic. Interestingly though, labor force participation is down below pre-pandemic levels, indicating that a lot of the “job growth” may be from self-employed people taking corporate jobs or people taking second jobs (to this point, I’ve always wondered how common it was for people to take two full-time work-from-home jobs at the same time). How can the economy continue to add over twice as many jobs as the population growth would imply is sustainable? It can’t, and it implies employment churn and inflation rather than actual economic growth. However, the fact that this has gone on as long as it has probably says something about whether the Fed can declare victory on inflation yet.

In some ways, the resilience of the labor market is a great thing. If somebody is a software engineer who was laid off after working 20 hours per week building the Metaverse (META) and gets hired by General Motors (GM) or Ford (F) to help with their electric car division, then the Fed is winning. Similarly, if restaurants are able to get staffing now because the balance between people who want to eat and people who are willing to cook has been restored with the end of free money, then that’s part of the healing process after paying people $800 per week to not work. But in other ways, having two open jobs for every unemployed worker is a signal that inflation is not yet under control and probably won’t be without the economy experiencing a hard landing. My feeling is that this jobs report actually won’t be that bad because so much labor talent was being wasted in places like SPACs/altcoins/NFTs/metaverse that the real economy can easily absorb the first wave of layoffs. The recession is still very much coming, and we might already be in it from a technical perspective, but it won’t come from tech workers getting laid off from Meta and getting hired by automakers or other big tech companies.

A Critical Juncture For Stocks

For QE-addicted stock markets, the worst thing that can happen Friday might be if the payroll report shows the economy added 250,000-plus jobs for the month. That would mean that the Fed is satisfied with the growth in the real economy and will have no issue tightening policy more and dropping the hammer on thousands of money-losing businesses that built their entire business models on zero-interest rates and QE. This would drive valuations down for stocks and force investor emphasis back to growth and profitability, where it belongs. But those who have built their business models around easy Fed policy are all likely praying for a weak nonfarm payroll report. These are the usual suspects, from thousands of money-losing businesses funded by Silicon Valley and meme stocks-to real estate speculators and builders that overpaid for land based on 3% mortgage rates.

After surging the so-so October CPI release, stocks had been eerily flat for about three weeks before the latest pivot mania post-Powell rally. Critical tests for bulls are ahead, with a slew of data about to come in.

I’ve written that I like Treasury bills better than stocks here, and I continue to believe that T-bills will be your best hedge against both inflation and recession as the Fed’s battle against inflation rages on. There are buyable stocks here, but paying nearly 19x earnings for the S&P 500 (SPY) going into a probable stop-and-go recession is a very risky bet.

All of these are individual data points, but the question you need to ask is how solid the economy really is underneath the hood. In some ways, the economy is healing from the pandemic. Bubbles are unwinding in housing and used cars, and people are getting back into the workforce. But in other ways, the economy is in a lot of trouble, with living standards falling month after month and inflation continuing to be far above target. Restoring price stability is crucially important for the Fed, but doing so is likely to pop asset bubbles, drain liquidity, and expose all of the fraud and waste that has built up in the economy over the last 10 years. If you’re thinking about your portfolio for the long term here, then the good news is good news as long as you’re invested in companies that turn a profit and have reasonable valuations. If your holdings are mostly speculative in nature like SPACs (SPAK), AMC Entertainment (AMC), or Beyond Meat (BYND), or have super high valuations like Amazon (AMZN), Tesla (TSLA), or Nvidia (NVDA), then you’re going to live and die by the sword of liquidity. Many stocks fall in between trash and treasure, but my guess is that there will be good opportunities to pick up shares in high-quality blue chips in the coming months as liquidity continues to drain. Of these, some of my favorites in the large-cap space are Microsoft (MSFT) around $210, Google (GOOGL) anywhere below $95, and Berkshire Hathaway (BRK.B) below $300.