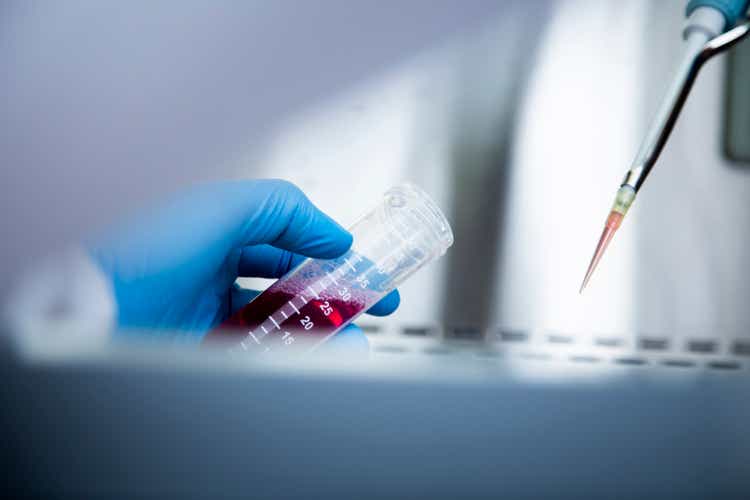 Kodiak Sciences (NASDAQ:KOD) is a great speculative biotech play to look into. It had a failure of a phase 2b/3 study using its treatment Tarcocimab tedromer (KSI-301) for the treatment of patients with wet age-related macular degeneration, which was a major setback. This failed data was reported in February of 2022 and the stock tanked by 80% on this announcement. However, it had a chance for recovery with the release of data from another study using this very same drug for the treatment of patients with macular edema due to retinal vein occlusion (RVO). As such, it succeeded because this particular phase 3 study, known as BEACON, where the primary endpoint of the study was achieved.

The large reason for a turnaround is because of management’s ability to alter the design for the BEACON study and the other ongoing studies. However, even with this positive data established the ability to turn things around is not yet complete. Thus, investors remain disappointed for the time being and the share price has not budged much. I think the reason why the stock price has not moved much since is because of the fact that they may want to see how the remaining studies play out first in 2023.

This first altered study led to success and there is potential for the others to achieve their respective endpoints as well. There are four data readouts expected in 2023, which could possibly provide further evidence of a turnaround. There will be readouts for the use of Tarcocimab tedromer in Diabetic Macular Edema (two phase 3 studies), wet age-related macular degeneration, and Diabetic Retinopathy. The first two indications of wet age-related macular degeneration and Diabetic Macular Edema will have data readouts in mid-2023.

On the other hand, the third indication of diabetic retinopathy is not expected until at least the 2nd half of 2023. With a new plan in motion with respect to the ongoing late-stage clinical trials, plus several catalysts expected in 2023, these are the reasons why I believe Kodiak Sciences is a great speculative biotech play to look into.

As I stated in the beginning above, the major problem for Kodiak Sciences is that it suffered a major setback when it reported failed results from the phase 2b/3 study using tarcocimab tedromer for the treatment of patients with wet age-related macular degeneration. However, it decided then to alter the BEACON study and then all other remaining studies. A major change done was how often patients should be dosed. It thought it could extend the dosing period out to 4 or 5 months and still be successful in the Wet-AMD study it failed on. That was not the case, but with a new plan in motion for RVO, such a change proved to be successful. This points to the meeting of the primary endpoint from the phase 3 BEACON study, which used tarcocimab tedromer for the treatment of patients with macular edema due to retinal vein occlusion. Retinal vein occlusion is the blockage of blood flow in the vein in the eyes. When such a blockage occurs, it then causes leakage of blood/fluid into the macula leads to blurriness and vision loss. The macula is very important for the eye, because it is the central area which allows for detailed vision activities such as reading. I believe that this indication alone is what makes Kodiak a great speculative play. Why is that? Well, it is because the global Retinal Vein Occlusion market size is expected to reach $34.7 billion by 2030. That’s not including the other large market indications it is going after like Wet Age-Related Macular Degeneration, Diabetic Macular Edema and Diabetic Retinopathy. All of these other indications are also multi-billion dollar markets.

The phase 3 BEACON study proved the turnaround strategy of altering dosing schedules for starters. However, besides meeting the primary endpoint, treatment with tarcocimab tedromer also proved to be non-inferior to a top-selling drug by Regeneron Pharmaceuticals (REGN) known as Eylea. This is what I will show below with the clinical trial results that were released. The phase 3 BEACON study recruited a total of 568 patients who were randomized to receive either:

As you can see above, going up against a top selling drug such as Eylea is a huge feat. The primary endpoint of the study was change in best-corrected visual acuity (BCVA) score, from baseline to week 24. The non-inferiority margin to compare tarcocimab tedromer to Eylea at week 24 was placed at 4.5 eye chart letters. This margin measurement was discussed with the FDA on pretrial regulatory feedback and precedent as well. Non-inferiority of tarcocimab tedromer was established with statistical significance in two population measurements. They are as follows:

On the safety side of things, tarcocimab tedromer was safe and well tolerated. Safety event to note was intraocular inflammation, but this was observed in both those treated with either the drug or Eylea.

According to the 10-Q SEC Filing, Kodiak Sciences had $537.4 million in cash, cash equivalents and marketable securities as of June 30, 2022. The company has funded itself through the issuance of common stock, redeemable convertible preferred stock, convertible notes, warrants and the sale of royalties. The biotech had closed a large offering of common stock back in November of 2020. That is when it sold a total of 5,972,222 shares of its common stock at a price to the public of $108 per share. In addition, the underwriters exercised in full their option to purchase up to 778,985 additional shares at the very same price. In total, it raised approximately an aggregate of $645 million before deducting expenses. It believes that it has enough cash to fund its operations for at least 12 months from the date of the 10-Q SEC Filing. It does have many data readouts which are expected in mid-2023, but it remains to be seen if it will wait until then to raise additional cash. It may even choose to raise additional funds before all of these data releases, because it won’t wait until the end when it’s about to run out of cash. Especially, since it burns about $77 million in cash per quarter in operating expenses. Should it need to raise cash again by selling shares of its common stock or other means, it will need to raise about $500 million or more in net proceeds to have a sizeable cushion of cash for the future.

There are several risk factors that investors should be aware of before investing in Kodiak Sciences. The first risk to consider would be with respect to tarcocimab tedromer for the treatment of macular edema due to RVO. That’s because this one clinical success is not all that needs to be achieved. In other words, management doesn’t intend to file the Biologics Licensing Application (BLA) to the FDA quite yet. The goal is to see first if the remainder of the results from the Wet-AMD and Diabetic macular edema trials are successful. Kodiak wants to file one BLA for all of the indications all at once. As such, even though the phase 3 BEACON study met the primary endpoint, it may only possibly file a BLA if these other studies are successful. If they are not, then it’s possible it may choose to not even file a BLA at all. While it intends to advance KSI-501 and KSI-601 using the ABC platform technology, with the filing of an IND submission in the 2nd half of 2022, it may abandon the entire ABC Platform technology partially or completely if the other studies don’t succeed. Meaning, there is no guarantee that it will choose to move forward with KSI-501 or KSI-601. The hope is that it can advance KSI-501, because it targets both VEG-F and IL-6 for retinal diseases, which may better compete against other available therapies. Again, a failure in several of the ongoing studies above, could mean an end to the platform completely. In that instance, the company may choose to sell itself.

Another risk to consider is that even if tarcocimab tedromer is approved for all the indications listed above, there is no guarantee that it will do well on the market. Both Roche (OTCQX:RHHBY) and Regeneron Pharmaceuticals (REGN) have already moved additional strategies forward. For example, in January of 2022, Roche received FDA approval for Vabysmo for Wet-AMD and Diabetic Macular Edema (DME). What makes this drug so special is that it targets both the VEG-F and Ang-2 proteins. The good thing is that patients can be dosed up to once every 8,12 or 16 weeks depending on how they respond. The downside is that they have to start off with 4 monthly loading doses first. Regeneron had 12-week and 16-week dosing regimens of Eylea that were non-inferior to the currently approved 8-week dosing. Having said that, Kodiak Sciences may be able to possibly compete with lower pricing or by achieving superior safety with tarcocimab tedromer.

Kodiak Sciences is a great speculative biotech play to look into. It has started its turnaround strategy with achieving non-inferiority compared to Eylea in the phase 3 BEACON study. All that remains now is to see if similar or superior results can be achieved in the other studies, all of which are expected to be readout in 2023. These data releases in 2023 would be as follows:

Again, the risk is that if these other studies fail in 2023, then Kodiak may refrain from moving forward to file a BLA for tarcocimab tedromer. I would think that KSI-501 would do better against retinal diseases, being that it targets both VEG-F and IL-6, but there is no guarantee that this will be advanced forward upon failure of the other ongoing studies. Even if KSI-501 and KSI-601 are moved forward, it would take years to get them back to the same clinical development spot as tarcocimab tedromer. Still, there are several catalysts and several shots on goal in 2023. With the phase 3 BEACON study being successful, at least it was shown that this drug works in treating patients with macular edema due to retinal vein occlusion.