Li-Cycle Has Enormous Potential In A Multi-Billion Dollar Market (NYSE:LICY) 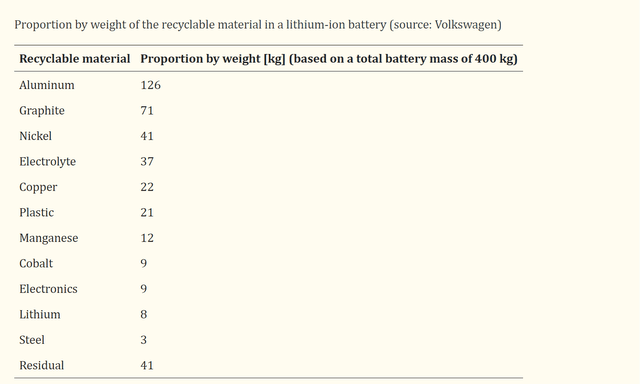 Li-Cycle (NYSE:LICY) is one of the more exciting companies in the battery industry; they specialize in recycling lithium batteries that are used in a broad range of technical devices and EVs. During the recycling process, the company recovers the raw materials and resells them back into the market. The company was founded in Ontario in 2016 and went public via a SPAC in August 2021.

In the past weeks, I have written several articles about lithium miners (Albemarle, Lithium Americas) and a lithium ETF. In these articles, I write about the lithium market and what the supply-demand situation will likely look like in the future, so I would instead refer to these articles than repeat too much here. In a nutshell, the lithium market will be very tight, and we will likely have a supply shortage. Of course, there are many variables here; the biggest one is how many electric cars will eventually be sold. EV batteries will be the most significant part of the demand.

The role of lithium recycling

But there is another factor that is written about far less frequently. Most analyses focus on this much lithium being mined and so much demand. But when you consider that a battery in an EV lasts about 10-20 years, the question of the recyclability of the raw materials naturally arises.

Today, a typical EV battery weighs one thousand pounds. It contains twenty-five pounds of lithium, sixty pounds of nickel, 44 pounds of manganese, 30 pounds cobalt, 200 pounds of copper, and 400 pounds of aluminum, steel, and plastic. Inside are over 6,000 individual lithium-ion cells.

That’s a lot of materials in just one battery, multiplied by millions of vehicles. Considering the lifetime of batteries, more and more batteries will be up for recycling around the middle of the decade. So if this can be done at economical prices, it will become a billion-dollar market and another source for lithium and all other materials besides the mines. The World Economic Forum estimates that 54% of batteries will be recycled by 2030, which could cover about 7% of the raw material demand. To achieve this recycling target, industrial recycling capacity must be increased by a factor of 25 (page 16 in that report).

It is challenging to find exact figures here. So far, estimates are that mining produces cheaper raw materials than recycling. Of course, this ratio may change in the future, as mine operators tend to exploit the most accessible sources first, which means that mining could become more expensive over time. On the other hand, there could also be technological developments in battery recycling to make it cheaper.

Although it remains cheaper to mine new materials for EV batteries than to recycle them, EV manufacturers and governments alike are increasingly wary of new geopolitical realities that could restrict supplies, and the incoming ‘tsunami’ of used EV-batteries that need to be reused or recycled safely.

But the most likely scenario is that both will coexist. It would be profitable for mine operators and recycling companies with sufficiently high raw material prices. If newly mined raw materials are cheaper, the mine operators have higher margins at the same selling price than the recycling companies. But both would be profitable. I also suspect there will be regulatory enforcement because what else is to be done with the batteries? The batteries would be a significant burden to the environment if they were not recycled.

In addition, from a geopolitical point of view, it also makes sense to recycle batteries. Only a few countries have lithium. So if you recycle your once-purchased material several times, you reduce your risk from geopolitical tensions.

Based on all these facts, it seems clear that there is no way around battery recycling. This has often been avoided with smartphones and small electrical appliances. Still, electric vehicle batteries weigh several hundred kilos and contain too many valuable materials. So what does Li-Cycle have to offer?

Li-Cycle has two types of recycling factories: “hubs” and “spokes.” Several spokes, where the initial processing of batteries takes place, are already in operation in North America. Spokes in Germany and Norway are scheduled to follow in 2023. The so-called black mass, which contains materials such as cobalt, lithium, and copper, is the result of this first step. The recycling process’s second and more profitable step occurs in the hubs, where these metals are chemically recovered from the black mass. The first hub is currently under construction and is expected to be operational by 2023 in Rochester, New York. In the end, Li-Cycle itself will become a supplier of battery-grade materials. The goal is to have seven spokes and one hub by the end of 2023. This hub in Rochester should have the following capacities of input and output.

Which together is just over $1B. The actual revenue figure will likely be significantly lower as the company prefers long-term off-take contracts. Also, this figure is based on total capacity utilization, but currently, the company would not produce enough black mass to fill the Rochester hub. In 2022, they are producing about 3,500-3,800 tons of black mass. Therefore, the revenue estimates below seem much more realistic than my best-case total capacity scenario.

Li Cycle needs suppliers of batteries and production scrap from battery manufacturers as well as customers for its end products. Several well-known partnerships have already been secured in this area, for example, with Glencore (OTCPK:GLCNF).

As long as the company delivers reasonable prices and good quality, there is no need to worry in this area. There will be countless batteries to recycle, and the recovered raw materials remain in demand worldwide.

The company still has more than $600M in cash, and the total enterprise value is only $754M, as the stock has dropped 40% since the IPO. According to the company’s statements, this cash is sufficient to fund the plans until the end of 2023, and they already plan to be a “profitable, cash-generating business once operational.”

Overall the roadmap for the next couple of years seems straightforward, which I like. But how many hubs and spokes there will be in the long term and what the market demand will be is impossible to gauge now. Also, the company says that it will be cash flow positive from 2024. How high the profit will be is hard to estimate, so I omit this. It depends on the raw material prices, the contracts concluded with customers, how much black mass can be added to the company’s hub, and so on. At the moment still too many variables.

Given my previous calculation that the hub in Rochester alone, fully utilized, would have a revenue potential of $1B, it seems very attractive, especially at the current low enterprise value. Also, the company has a very nice first-mover advantage. It is in an excellent position to gain a foothold in a future billion-dollar market because it will probably only take off when millions of EV batteries become unusable.

One thing I always want to look at, especially with companies that are not yet profitable, is stock dilution and whether there is insider selling. I have not found any information about insider sales. There has been further share dilution of about 9% since the IPO. The SBCs are within a reasonable range.

In a potential billion-dollar market, there will be competition, and it might have greater financial resources than Li-Cycle. Examples are Umicore (OTCPK:UMICF) and Volkswagen (OTCPK:VWAGY)

In early 2021, Volkswagen began operations at a pilot plant for recycling high-voltage vehicle batteries at its site in the German town of Salzgitter. The plant will recover 100 % of the lithium, nickel, manganese and cobalt, plus 90 % of the aluminum, copper and plastic. The plant is currently designed to recycle up to 3600 battery systems per year, equivalent to around 1500 t of battery mass. However, the system can be scaled up to process larger volumes when more used batteries become available.

There is also a risk that the technical and chemical approach may not work as expected on a large scale. You have to remember that the hub in Rochester is the first one and is not in operation yet, so the company still has to prove if everything works as promised. There is also a risk of construction delays.

Lately, I have written several articles about promising companies active in potential future technologies. E.g., IONQ for quantum computing and NuScale for small modular nuclear reactors. Most of them didn’t appeal to me because their plans are years away and contain too many promises and too few actual facts, at least in my opinion. But in that respect, I like Li-Cycle much better. Several spokes already produce the black mass; from next year on, they should have the first hub. There are also several promising partnerships.

A buy is worth considering for investors willing to take risks. If you want less risk and less potential profit, you can wait until next year to see if everything works as planned. Another possibility is to work with cash-secured puts to find a cheaper entry into the share.