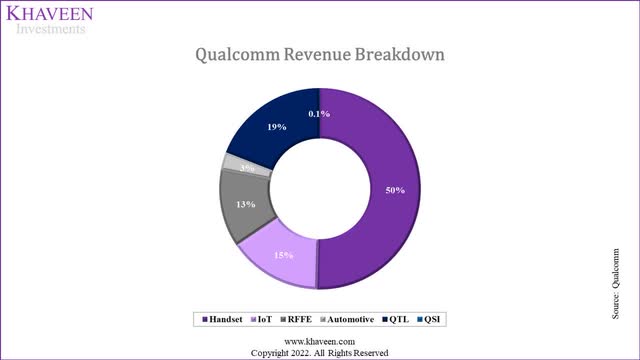 In this analysis of QUALCOMM Incorporated (NASDAQ:QCOM), we analyzed its VR opportunities following the recent announcement of its launch of the company’s next-gen Snapdragon XR2+ Gen 1 chipset and its partnerships with Meta Platforms (META) and Microsoft (MSFT) to develop custom chipsets for their devices. First, we examined the AR and VR market growth outlook based on the forecasted shipment growth of AR and VR devices through 2026. Furthermore, we analyzed Qualcomm’s positioning in the AR and VR chipset market and compared its capabilities with competitors. Finally, we examined the company’s partnerships to determine whether it could maintain its market positioning.

According to the chart and table above, the total AR and VR devices market shipments were forecasted to grow by a 5-year forward average of 35.3% to 50.46 mln by 2026 based on IDC. The consumer segment represents the largest accounting for 85% of the total shipments in 2022. However, the commercial segment was forecasted to grow at a higher growth rate of 64.2% on average through 2026.

Some of the drivers of the consumer AR and VR market include:

For virtual browsing and shopping, customers can create personalized avatars for shopping for clothes. For example, Hugo Boss partnered with Reactive Reality to “create versions of themselves that match their measurements and try on thousands of Hugo Boss garments”. According to ThreeKit, 71% of consumers indicate that they would shop more if using AR technologies as it can “communicate details about the look and feel of a product that traditional photos just can’t match.” Additionally, a PwC survey found that 32% of consumers purchase products after viewing them with VR technologies. Additionally, VR technologies enable consumers to travel around the world virtually through immersive video, allowing consumers to check out different places before traveling there. Moreover, according to PwC, half of VR users used the technology for entertainment purposes such as games, movies and TV shows. VR technologies also enable consumers to experience immersive sports games or concerts. For example, customers can use VR devices to watch sports games such as “NBA, NFL, Boxing, Soccer, WWE, NASCAR.”

Furthermore, some of the drivers of the commercial AR and VR segment include:

For the commercial segment, VR/AR technologies are used for military applications. For example,

military tanks have limitations regarding full visual awareness. AR-based head-mounted display and the 360-degree camera offer the crew inside a tank a complete horizontal field of view.

Microsoft secured a contract from the U.S. government for its HoloLens AR headsets with a value of up to $21.88 bln over 10 years. In addition, with the rise of Industry 4.0, the use of VR/AR technologies could enable various applications for industrial use. For example, the applications in digital engineering and smart buildings where 3D models can be visualized. One of the industries includes automotive where companies could use VR to reduce the time for the “initial design and physical modeling.” According to the company, Qualcomm XR can also be used “for treatment of phobias or PTSD, early detection of disorders or special needs.” For example, VR therapy software has been developed for patients to overcome anxiety. Furthermore, the use of AR and robotic surgeries

can help surgeons conduct minimally invasive procedures by providing X-ray vision of digitally simulated images directly into the microscope of a surgical device.

Finally, companies are increasingly adopting VR technologies for education and training applications. For example, “Walmart (WMT) has used 17000 Oculus Go headsets for training its employees in the customer service department.” Also, in manufacturing settings, an example of VR technologies being used is for remote inspection and monitoring of equipment and machinery which reduces disruptions to factory operations.

Overall, we believe the market growth outlook of the AR and VR devices market is positive with the forecasted average growth rate of 35.3% and thus we expect it could benefit chipset suppliers including Qualcomm.

According to Qualcomm’s investor presentation, it claimed to have had a 90% share of global design wins. The company’s customers. The company’s Snapdragon XR product lineup was designed to cater to the AR and VR market. Recently, the company announced its next-gen XR2+ Gen 1 chipset. The chipset offers 50% higher performance and 30% better heat dissipation compared to its previous XR2 chip according to Qualcomm. Moreover, MediaTek Inc. (OTCPK:MDTKF) had also announced that it was developing chipsets specifically for VR and announced its partnership with Sony PlayStation to develop chipsets for its VR devices.

Furthermore, we compared Qualcomm’s XR2 chipset with MediaTek’s H30, which was its first chipset with VR support to determine whether Qualcomm has better tech capabilities.

Based on the table, Qualcomm’s chipset has a more advanced process technology compared to MediaTek which is 10nm. However, MediaTek’s H30 chipset has a higher number of cores and frequencies than Qualcomm’s. Though, both chipsets have similar memory capacities. In terms of benchmark performance by Geekbench, Qualcomm has a higher single-core benchmark score of 924 compared to MediaTek. Qualcomm also has features such as 5G support which MediaTek’s chipsets do not. Additionally, Qualcomm’s chipset is designed specifically for AR/VR use while MediaTek’s H30 is a mobile chipset.

Overall, we believe this highlight Qualcomm’s competitive advantage over MediaTek as it surpasses it in 5 out of the 7 criteria based on the table above.

Qualcomm recently announced a multi-year agreement with Meta to develop custom chipsets for its next-gen XR devices. Additionally, the company announced a deal with Microsoft for custom chipsets for its AR devices. Based on Qualcomm’s investor presentation, the company has over 50 design wins for XR devices. Its customers include Meta, Microsoft, Lenovo, Pico, HTC and DPVR. We examined the market share of XR companies based on unit shipments below.

According to the chart above of XR devices market share, Meta dominates the market with a 66% share in Q2 2022. This is followed by Pico which had increased its share from 6% in Q1 2020 and DPVR at a 9% share.

Thus, we believe this highlights Qualcomm’s strong positioning in the VR and AR chipset market as it has a higher number of customers than MediaTek and its customers dominate the XR market including Meta, DVPR and Pico with a combined share of 86%.

According to Reuters, one of Qualcomm’s customers and the largest XR device maker by market share, Meta:

ultimately wants to develop custom silicon for use in its hardware, but in the meantime Qualcomm will continue to be the partner it relies on for VR chips.

Thus, we believe this could potentially pose a threat to Qualcomm’s revenue growth in the future if it switches from Qualcomm to its own chipset.

All in all, we expect the market growth outlook of the AR and VR market is positive with the forecasted average growth rate of 35.3%, thus could benefit chipset suppliers including Qualcomm which we believe has a competitive advantage over MediaTek and a strong positioning in the VR/AR chipset market as it has a higher number of customers than MediaTek and its customers dominate the XR market including Meta, DVPR and Pico with a combined share of 86%.

Based on a discount rate of 9%, our model shows Qualcomm’s shares are undervalued by 106%. This is higher compared to our previous analysis, which was an upside of 78.89% despite our price target remaining relatively unchanged at $244.23, as the company’s stock price declined by 18.5%. Thus, we continue to rate Qualcomm as a Strong Buy.