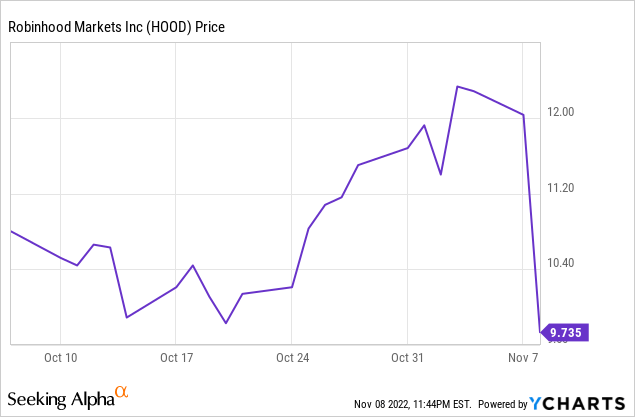 Robinhood (NASDAQ:HOOD) plunged on Tuesday after a plunge in FTX Token (FTT-USD) and the proposed takeover of FTX by Binance shook the crypto markets. HOOD has been falling rapidly over the past year as it was one of the tech stocks which unfortunately reached bubble valuations before the crash. Yet with the fundamentals showing tangible signs of improvement, has the beatdown been enough? I am of the opinion that it has, and that HOOD at 8x sales with 56% of its market cap in net cash is cheap enough to buy.

HOOD initially spiked after releasing third quarter earnings results due to the surprise profit milestones. But those gains were viciously given up – and then more – on Tuesday, as the stock plunged 19% in a single session.

I last covered HOOD in August and the stock has declined 5% since then. That surprises me considering that HOOD has made meaningful progress towards boosting margins and sustainability amidst a difficult environment.

What Is Happening With FTX?

Before we dive into HOOD fundamentals, let’s first discuss the FTX token. FTT-USD, the exchange token of Sam Bankman-Fried’s FTX exchange, has plunged 80% in only a matter of days, as it was revealed that big investment holder Binance sold off its stake. That apparently led to a liquidity crunch at FTX, and Binance has opportunistically stepped in to acquire the company and provide much-needed liquidity. For an excellent overview of the situation, check out this article by fellow contributor Mike Fay.

It is clear that in spite of the volatility already seen in the crypto-markets, there may be more volatility ahead for cryptocurrencies. Due to HOOD having significant exposure to cryptocurrency trading, it appears that its stock has borne the impact of that realization. Yet I expect cryptocurrency trading volumes to recover at some point, and HOOD profits from equity trading as well, not to mention that the company has shown real signs of fundamental improvement. While HOOD does have cryptocurrency exposure, the crash in FTT-USD does not appear something that should be bothering HOOD investors, especially at this valuation.

The third quarter saw net cumulative funded accounts remain stable at 22.9 million, but that isn’t the right metric because HOOD earns revenues mainly from fees. Instead, investors should focus on monthly active users (‘MAUs’) as HOOD profits most from active investors. MAUs declined sequentially for the 5th consecutive quarter.

Yet there was reason for optimism. Assets under custody grew sequentially for the first time in 3 quarters, which may surprise some considering the great volatility in all asset classes.

Critical to that strength was net deposit growth of $2.7 billion, as well as some improvement in average revenue per user.

Is it too early to wonder if HOOD has gone through the worst of it, with remaining users representing more loyal and active customers? The fundamental signs point positively on that one.

As expected, HOOD was a beneficiary from the rising interest rate environment as net interest revenues jumped.

HOOD largely crumbled due to both valuation and deep operating losses, but the company surprisingly achieved positive adjusted EBITDA in the quarter, showing the realized progress from hard work on cost cutting.

The $47 million in positive adjusted EBITDA was the first positive number in 5 quarters.

On the conference call, management guided for the fourth quarter to see operating expenses prior to stock-based compensation increase slightly sequentially to up to $370 million, which would be $100 million below where they started the year.

HOOD ended the quarter with $6.2 billion of cash and no corporate debt, meaning that net cash represents approximately 56% of the current market cap.

Is HOOD Stock A Buy, Sell, Or Hold?

HOOD got a lot of bad rap during the pandemic amidst the meme-stock craze, which is ironic because it itself became a meme stock. HOOD has been aggressive in rolling out new features. Even though HOOD has faced declining MAUs for many quarters now, it is crucial to remember that HOOD had been an innovative brokerage firm which was rapidly growing users heading into the pandemic.

A bursting of the tech bubble and growing doubt regarding the company’s ability to survive amidst tough macro conditions and declining users has crushed the stock price. But after the tumble, HOOD is now trading at less than 8x sales.

That is before accounting for the 56% net cash position. HOOD’s revenues are high margin, meaning that if the company can return to MAUs growth, then operating leverage should eventually lead to generous operating margins. I assume the company can achieve 30% net margins over the long term and return to 20% growth rates. Applying a 1.5x price to earnings growth ratio (‘PEG ratio’), I see fair value pegged at around 9x sales, representing ample upside after accounting for future years of growth and the net cash position.

What are key risks? HOOD still faces the risk of regulatory intervention, though recent reports indicated that the SEC may allow payment-for-order-flow. Even if HOOD maintains positive adjusted EBITDA, ongoing equity-based compensation may still dilute shareholders in the meantime until the company reaches GAAP profitability. If my thesis for a recovery takes too long, then that dilution would ruin the party for shareholders. At the same time, it is arguable that the large net cash position helps to offset that risk, as it buys the company significant time to right the ship. Of course if HOOD is never able to return to secular growth (execution risk), then the future trajectory of the stock price may be $0. As discussed with Best of Breed Growth Stocks subscribers, a diversified portfolio of beaten-down tech names may be the best way to take advantage of the tech crash. HOOD (in small quantities) fits right in such a basket, offering a high-risk high-reward opportunity in tech.

Aaron Chen PS2/iStock via Getty Images Investment Thesis Alcoa (NYSE:AA) prospects are likely to change. Both positive and imminent change is on the cards. But before going further, I'm going to start this analysis with a quote from Alcoa's management in the Q&A...

TSMC Vs. ASML: Selling Shovels And Picks In The Gold Rush