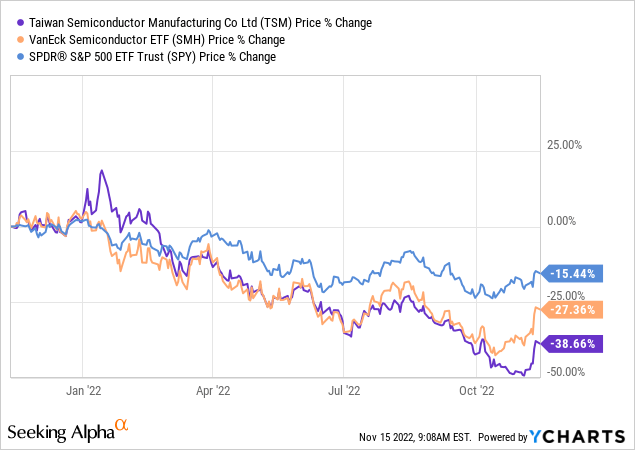 At pixel time, shares of Taiwan Semiconductor Corp (TSM) are up 12% in pre-market trading as news that Warren Buffett’s Berkshire Hathaway (BRK.A, BRK.B) has taken a 60.1 million share stake in the company for an estimated $4 billion. TSMC is the No. 1 holding in the VanEck Semiconductor ETF (NASDAQ:SMH) with a 10.1% weighting and was the main reason I bought the fund as compared to other semiconductor ETFs. As the chart below clearly shows, TSMC – generally regarded as the top contract manufacturing semiconductor company on the planet – and the source of Apple’s (AAPL) and Nvidia’s (NVDA) leading-edge chips, has been hit hard by the 2022 bear market, and also by fears that China will take over Taiwan and crush the company. As a result, TSMC has significantly underperformed not only the S&P 500, but the broad semiconductor sector as well. Today, I will discuss why a China invasion of Taiwan is improbable and take a closer look at why the SMH ETF is a great choice for investors for the rest of this decade and far beyond.

As I have written in past Seeking Alpha articles on the SMH ETF and semiconductor companies in general, the long-term fundamental case for owning semiconductor and semiconductor equipment makers is as bullish as it has been in my lifetime. I should know, I worked in the semiconductor industry for 25 years. As compared to the “dot-com” era, semis are no longer such a cyclical industry that’s overly dependent on the PC and automotive market. Today, we have strong semiconductor demand-pull from a plethora of technology sub-sectors: 5G infrastructure, smartphones, high-speed networking, IoT, high-performance computing (“HPC”), data centers, and hardware accelerators for AI/ML algorithms to run on mega-data sets. Oh, and companies are still making PCs and automobiles, with the exception that now the transition to EVs has greatly increased the semiconductor content per vehicle. This being the case, semiconductors are a must own for investors in the 21st Century.

As for TSM specifically, the narrative was that China would invade Taiwan and flatten its fabs or render them otherwise inoperable. But let’s think about that for a second. TSMC is the crown jewel of Taiwan. It’s what China wants the most – so why would China destroy the fabs by invading? China knows the fabs would be inoperable without the men and women that run them, and without the leading-edge semiconductor equipment that foreign suppliers have installed at those fabs. In addition, China surely realizes that the leading-edge chips that are contained in all those smartphones and high-end electronic devices that are made in China come from TSMC. Those chips are the source of millions of good paying middle-class manufacturing jobs in China. President Xi may be an autocrat, but he himself is an engineer, and is nothing if not pragmatic. To attack Taiwan and destroy TSMC’s fabs make absolutely no sense – such an attack is simply not in the best interest of Xi, China and its people.

Buffett’s team at Berkshire obviously knows this. Through the company’s previous investment in BYD (OTCPK:BYDDY) (OTCPK:BYDDF), Buffett also has likely had high-level talks with Chinese government officials. That being the case, Berkshire’s investment in TSMC is a big vote of confidence in the company’s future and that it is safe (or as relatively as safe as any investment can be).

With that as background, let’s take a closer look at the SMH ETF and see how it has positioned investors for success going forward.

Nvidia, which outsources is highest-end semiconductors to TSMC, is the No. 2 holding with a 9.5% weight. Nvidia has had a tough year given the macro-environment, its previous sky-high valuation, and the fact that the U.S. government has placed high-tech restrictions on sales to China. The stock is down 44% over the past year, but still trades with a rather lofty P/E of 48x. However, Nvidia is an acknowledged leader in high-performance semiconductor design and has established itself as a juggernaut in AI as well.

Broadcom (AVGO) is the No. 5 holding with a 4.9% weight. Broadcom is my favorite semiconductor company due to its nice yield ($16.40/share annual dividend, or 3.2%) as well as its long-term capital appreciation track record. CEO Hock Tan has established himself as a rock star and one of the best high-tech managers (if not the best) on the planet, with multiple highly successful acquisitions. The latest attempt is to buy VMWare (VMW) as a great addition to the company’s already strong high-margin enterprise software group. But the heart of Broadcom continues to be its high-speed networking development platform (both HW and SW) which always keeps the company one-step ahead of the competition. AVGO is down only 6.5% this year and trades at a forward P/E of only 13.7x. In my opinion, the stock is a steal here.

Semiconductor equipment makers are well represented in the top-10 holdings. ASML Holdings (ASML), Applied Materials (AMAT), and Lam Research (LRCX) equate, in aggregate, to 15.6% of the portfolio. As I offered in my recent Seeking Alpha article on KLA Corp (KLAC): Semiconductor Equipment Makers Are Not Dead Money. As the following chart shows, these companies have been hammered this year. However, on the right side of the chart, note the bounce off the lows. Perhaps investors are taking notice that these companies have a big long-term tailwind from the Biden administration’s “CHIPS Act” and the fact that newly planned semiconductor plants in the U.S. (including TSMC’s new multi-billion down plant in Arizona) will have to be populated with new leading-edge semiconductor equipment:

Up until the bear market of 2022, the SMH ETF had been a fantastic performer. However, this year has certainly impacted its long-term performance statistics. That said, note the average annual 10-year return of 21.46% is stellar:

While the XSD ETF has out-performed the SMH over this time frame, and is a great option for investors, it does not hold TSMC in the portfolio and has a relatively small weight in Broadcom. That being the case, it is my belief that over the next few years, SMH will out-perform XSD. That said, XSD is an excellent fund that holds relatively smaller higher-growth semiconductor companies. That being the case, I would argue investors might consider splitting their allocation to the semiconductor sector roughly 50/50 between the two funds (SMH and XSD).

The risks of investing in semiconductors at this point in the cycle is that a severe recession in 2023 could lead to reduced demand, reduced margin, reduced profits, and reduced valuation levels. A deepening of the U.S./China high-tech trade war cold continue to dampen sentiment on the sector.

Upside risks include a pragmatic agreement between the U.S. and China to compete vigorously, but peaceably and with clear and transparent trade guidelines. Meantime, as mentioned earlier, the fundamental demand thesis for semiconductors remains firmly intact in my opinion (as evidence, just reference the TSMC growth numbers recently reported and mentioned earlier).

In my mind, Warren Buffett led Berkshire Hathaway’s investment in TSMC is validation and vote of confidence in the long-term future of TSMC and the semiconductor sector in general. As I have pointed out in this article, the semiconductor sector is no longer the overly cyclical industry it was back in 2000 when the sector was still highly dependent on PC and automotive demand. In fact, I can think of no other sector that’s as strategically and economically as important to the U.S. and China in the 21st Century as is the semiconductor sector. That being the case, I reiterate my BUY on the SMH and consider it to be a core long-term holding for those investors wanting to build and hold a well-diversified portfolio through the markets ups-n-downs.

I’ll end with a five-year chart of the SMH ETF and note that, despite the 2022 bear-market, SMH is still significantly higher than it was pre COVID-19 and the significant challenges posed to the sector by supply chain disruptions and factory shut-downs by the global pandemic: