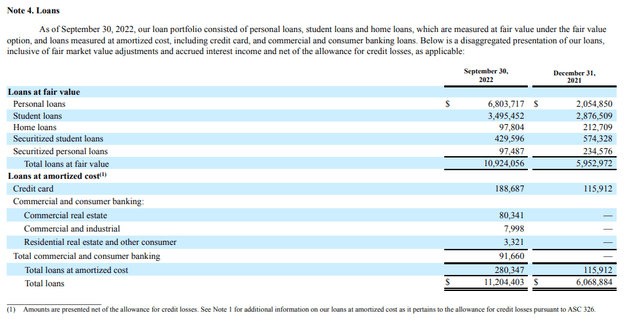 I somewhat feel similar the more I look into and think through SoFi Technologies’ (NASDAQ:SOFI) business model and financial disclosures. In my view, there are a number of material red flags that raise doubts as to the investment thesis in this stock. I believe the share price decline in recent weeks (following the so-called “great earnings beat”) reflects the current uncertainties both on a macro level as well as SoFi-specific.

In this article, I will discuss these and expand on my previous articles (here and here).

But the question you are probably asking is why am I still long?

There are a couple of reasons. Firstly, It is a very small position. I usually buy a small position in certain high-risk stocks as it maintains my interest and ‘forces’ me to follow the fundamental performance of the company as well as become better versed with the risks the company faces. Later on, I may decide to sell or increase the position, back up the truck, or short the stock.

My original thesis was premised on SoFi being an innovative digital bank, multi-product, low risk, and essentially a form of a call option on “a financial super app”. The cracks in this thesis are continuing to form.

Not A Low-Risk Proposition Anymore

In its previous life (pre-banking charter), SoFi’s origins were primarily as a student loans refinancer/originator – loans which it subsequently sold to investors. This is not the case anymore. In a short 2 quarters, SoFi has turned into a predominantly personal consumer lender. This is plainly evident from its loan assets composition as disclosed in the 10-Q:

The bulls will tell you the spike in balances is ‘temporary’ and these will be sold within 6 to 7 months. In my view, the bulls are awfully naive about this. Holding the loans on the balance sheet is 3x more profitable than selling these (as disclosed by LendingClub (LC)). SoFi desperately needs the interest income revenue to sustain its “adjusted EBITDA” growth narrative. Finally, investors’ demand is waning (understandingly so given rapidly rising interest rates and recession fears), so even if it wanted to sell all, there are no buyers. As a point in case, during Q3 SoFi repurchased $1.27 billion of loans it previously sold to investors.

The personal consumer lending product is certainly profitable through the credit cycle except that there are 3 issues when it comes to SoFi:

As disclosed in its 10-Qs, SoFi regulatory capital ratios are declining rapidly. The below slide is the position as of the 2nd quarter:

Whereas, this is the position in Q3:

As you can see, within one quarter, SoFi’s tier 1 leverage ratio has reduced from ~35% to ~17%. Now if SoFi would have included the CECL provision (like its closest peers do), their capital ratios would roughly halve again. If a recession ensues, then their capital position in the banking subsidiary would be further depleted.

To be fair, SoFi probably has excess capital in other subsidiaries or holding company and it can potentially recapitalize the banking subsidiary if needed. However, that’s only half a comfort given that SoFi is loss-making on a GAAP basis which means overall their capital resources are declining.

To be clear, I am not suggesting this is an existential risk for SoFi but I would keep a close tab on this. In banking, the capital position is everything and regulators would be closely scrutinizing the safety and soundness of a firm like SoFi.

As SA reported, SoFi’s share price has declined further after lawmakers urged a review of its crypto trading activities. Some may take the view that this is headline-grabbing and/or politically motivated, after all, SoFi’s direct exposure to crypto trading is quite small.

Having said that, entering this space as a consumer bank is certainly ill-advised in my view in the first place. Contrast this with LC’s position on crypto assets products’ offerings as articulated in this Bloomberg interview from March 2022:

(LC) is resisting pressure from stakeholders to jump into cryptocurrency as it completes a bank acquisition and works to introduce more traditional financial products.

“Look, the customer demand is there, but my view — our view — is if you’ve got $15,000 in credit-card debt, the thing you should do with your next $500 is not buy a speculative asset,” Chief Executive Officer Scott Sanborn said Tuesday in an interview at Bloomberg News headquarters in New York. “We recognize we could be leaving some consumer demand on the table.”

I sense that SoFi hasn’t quite digested what it means to operate (and benefit) from being a fully licensed bank. There are very good reasons why other banks are not offering this product.

The Student Loan Pause Is a Sideshow

The news that President Biden announced an extension of the pause on federal student loan payments, whilst a clear negative to the stock in the short term, does not in my view materially change the investment thesis in the stock.

In my view, given the high-interest rates and the fact that much of the outstanding student loans are on fixed interest terms, the benefit to SoFi’s business of resumption is somewhat marginal.

In my view, investors are over-focusing on the past (student loans which are typically much lower yielding and lower risk) as opposed to what SoFi is focused on now, which is an unsecured consumer lending product.

Some of the bulls’ articles on SA are suggesting this stock is “coiled to explode” or otherwise “decimating the bear case” which, in my view, are not really understanding the bear thesis or otherwise have conducted a proper second-level analysis and challenge. Other articles are just simply regurgitating the earnings deck and trumping up to massive growth in “Adjusted EBITDA” whilst not realizing that this is a low-quality beat with non-recurring one-offs and a much riskier asset acquisition profile.

Simply put, investors need to realize that SoFi is a personal consumer lender that is levering its balance sheet to generate interest income but at the same time, it does not reserve for expected lifetime losses like its peers. The expectation that it will sell most of its personal loans quickly is naive, to say the least. The key risk is that it will suffer outsized loan losses if/when a recession manifests.

This is clearly not a low-risk play.

SoFi’s problems are exacerbated by its unit economics. It spends far too much (others described it as “like a drunken sailor”) and inefficiently on sales and marketing expenses. It also continuously dilutes shareholders with massive share-based compensation (over $70m in Q3 alone). This is unlike Nu and LC which are both profitable on a GAAP basis even though they fully provide for CECL.

In the near term, though, I see it as a high-risk play given the expected recession. Tread carefully at least until the macro environment is clearer.