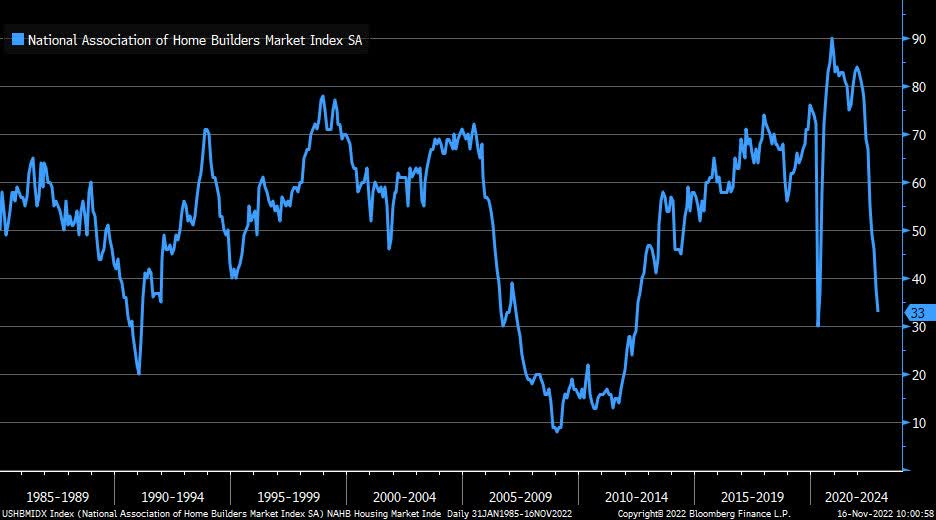 Housing has become the epicenter of the ongoing macroeconomic decline. The housing market is where all ongoing themes and trends come together. Think about high inflation, supply chain problems, falling consumer sentiment, and higher rates – to name a few things. In September, I wrote an article titled Breaking Down An Imploding Housing Market, which highlighted an increasingly tense housing market. In this article, I’m going to update my call as we’re indeed witnessing a steep deterioration in housing fundamentals, which is causing me to worry, as I do not expect the Federal Reserve to take its foot off the brake until something breaks. I believe that could happen in the housing market.

So, let’s dive into the details!

The NAHB home building index took another hit in November, falling to 33. That’s barely above the 2020 pandemic lows and back to where it was in the early stages of the housing recovery after the Great Financial Crisis.

The index has now posted 11 consecutive monthly declines, as homebuilders are feeling an ugly mix of macroeconomic headwinds.

As reported by the NAHB:

[…] “To ease the worsening housing affordability crisis, policymakers must seek solutions that create more affordable and attainable housing. With inflation showing signs of moderating, this includes a reduction in the pace of the Federal Reserve’s rate hikes and reducing regulatory costs associated with land development and home construction.”

The environment is truly challenging. Despite a slight decline in mortgage rates, the average 30-year fixed mortgage rate in the United States is still above 6.6%, comparable with levels seen during 2006 and 2007.

When adding high inflation, falling economic growth, and a hawkish Fed, we get a scenario where homebuilders have good reasons to be pessimistic. After all, their potential customers haven’t been this depressed since the early 1980s. Back then, the Fed was also hiking into a supply-driven inflation uptrend and economic weakness.

Even during the height of the pandemic, when people were locked down, not knowing what the economy would look like in 1-2 weeks, the cancellation rate was less than 20%.

Even worse, hot markets are now being impacted quite heavily. In the Southwest, cancellation rates have hit 45%, followed by 39% in the Lone Star State of Texas.

The nation’s largest home builder, D.R. Horton (DHI), reported 15% lower new orders in its latest quarter and a cancellation rate of 32%. The average sales price was up 6%. The homebuilder expects weakness to continue as long as rates remain high.

Prices Remain High – And What It Means For This Market

But wait, it gets worse. Home prices are still high. In October, the national median home sale price was barely below $400,000, which is still 4.9% higher compared to the prior-year quarter. It’s down just 1.4% versus September.

While high prices are not a sign of a housing explosion, it makes the situation so much worse for the average buyer. After all, buyers now have to finance these purchases at much higher rates, pressuring affordability even further.

What this means is that it pressures home sales tremendously. To use another chart made by Redfin, home sales dropped to less than 470,000 in October. That’s a decline of 27% compared to October 2021.

One of the reasons why prices remain high is that sellers decide to refrain from selling their homes. They stay put or turn properties into rental assets.

Hence, this is what rental inflation looks like. Year-on-year rent inflation is now at 7.5% in the United States. The highest number since the early 1980s.

This is what Wharton (University of Pennsylvania) commented on this in October:

Historically, except for the Great Recession, housing prices have never fallen, except with a substantial rise in unemployment. So that’s where, unfortunately, the economy is going.

The affordability factors are driving potential homeowners into the rental market. We see no sign of that abating. Quite the contrary. As mortgage rates rise, and we see future rises as the Fed continues to tighten – which is likely – that’s just going to drive more folks to the rental market and force rents up.

The big operators in the industry know this. And they are taking advantage of the situation. In the third quarter, 17.5% of all homes sold were sold to investors. That number is set to rise again as homebuilders are looking to sell unsold inventory in bulk to rental landlords.

J.P. Morgan’s asset-management business said this month it had formed a joint venture with rental landlord Haven Realty Capital to purchase and develop $1 billion in houses. A unit of real-estate firm JLL’s LaSalle Investment Management, in partnership with the landlord Amherst Group, said it plans to buy $500 million of homes over the next two years.

Tricon has nearly $3 billion it plans to tap to buy and build homes.

This trend is expected to accelerate as large players expect that a recession will bring down borrowing costs. However, it will also accelerate unemployment, which will keep it hard for private buyers to compete.

At that point, investors will accelerate home purchases, kicking less competitive private investors out of the market.

After all, private buyers are already in pretty rough shape.

Remember the excess savings during the pandemic? These savings are completely gone now.

Since mid-2021, savings have declined by $1.7 trillion, a 26% drop. More weakness is likely as interest rates have a lagging effect on savings.

What About The Fed?

The next Fed meeting is on December 13 and 14. The main question will be how the FOMC views the relationship between near-term inflation data and the ultimate destination for rates (the terminal rate).

For now, estimates are that the terminal rate will be in the 500-550bps range. This means another 100bps in hikes, followed by a rate cut in November of 2023.

The biggest risk for homebuilders and their customers is that the Fed isn’t done hiking. After all, inflation seems to be persistent due to supply and secular trends. This could mean that rates need to rise above 500 basis points and stay there longer than expected.

As reported by Bloomberg:

“I don’t think the market expectation is really off,” Mester said during an interview on CNBC. Daly told reporters after an event in Irvine, California that “5%, to me, is a good starting point” for how high rates need to go to restore price stability.

My opinion is that the Fed will eventually be forced to pivot. However, that won’t happen until inflation is coming down in a meaningful way. I believe that severe housing weakness could be the trigger that forces the Fed to change its view on future rate hikes.

Unfortunately, that won’t be if fundamentals do not deteriorate further.

Using the SPDR S&P Homebuilders ETF (NYSEARCA:XHB) as a proxy, home building stocks have risen 20.5% from their 52-week low as a result of lower-than-expected inflation numbers in October. This fueled a relief rally pushing the S&P 500 back above 4,000 points, while I am writing this.

Ignoring the macroeconomic situation, I have to say the XHB chart doesn’t look bad. The long-term uptrend is still intact and this 29% sell-off from its all-time high looks like a buying opportunity.

However, things are worse than the chart suggests.

Eventually, prices have to come down as even large investors are now taking a step back.

We’re likely moving towards a scenario where home prices start to accelerate to the downside. This could cause a situation where the Fed is expected to pivot. At that point, unemployment will likely be significantly higher.

Once that happens, lower rates will cause large investors to accelerate investments in the industry. At that point, I hope I will have placed my own bets.

What these investments could look like, we’ll discuss in the months ahead as I believe we’re dealing with a longer-term development here.

For now, I recommend investors stay away from homebuilders.

(Dis)agree? Let me know in the comments!