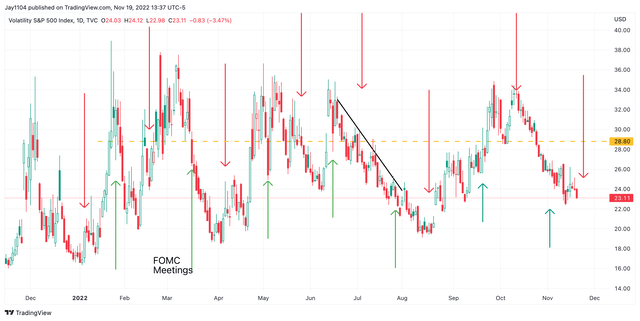 It will be a holiday-shortened trading week, but it will not be short on news events. The massive news event will come on Wednesday at 2 PM with the release of the November Fed minutes. These minutes will likely reverse the equity market’s celebration following a lower-than-expected October CPI report, as the Fed has a different view and is already pushing back hard.

Since the release of that CPI report on November 10, Fed-speak has been crystal clear – slower rate hikes do not mean a lower terminal rate, and one better-than-expected CPI report isn’t going to change the path of monetary policy. Ultimately, these speakers seem to think rates are going even higher.

The November FOMC statement indicated the likelihood of a slower pace of rate hikes coming, while the FOMC press conference indicated that the terminal rate was likely to be higher than previously expected in September. Since the FOMC meeting, a strong case has been laid out by many FOMC members for the overnight rate to head over 5% and potentially to go as high as 5.25% in 2023.

If this message of higher rates is correctly delivered in the FOMC minutes, then it seems more likely than not that the equity market rally since the October CPI report in mid-November should not only pause but reverse.

Additionally, the VIX should rise sharply heading into the FOMC meeting on December 14. Not on worries over a 50 or 75 bps rate hike but due to concerns over the Fed’s Summary of Economic Projections and the committee’s dot plot for terminal rate for the end of 2023.

In fact, throughout 2022, there has been a pattern of the VIX rising or falling into the FOMC meeting following the market’s perception of the Fed minutes. Currently, the VIX is trading towards the lower end of its trading range, around 23. The last time the VIX was this low heading into the release of the FOMC minutes came back on August 17, which also marked the end of the August rally and was followed by a sharp rise in the VIX and a very sharp decline in the S&P 500. The same thing also happened at the beginning of April, which also marked the end of the March rally, and early January, which marked the market peak.

Rates And The Dollar

The bond market is already anticipating the more hawkish commentary out of the Fed minutes to be released this week. The Fed funds rates again call for the peak rate to be above 5% and back to levels seen immediately following the November FOMC meeting. Additionally, that peak rate is now seen coming in July instead of May, incorporating smaller rate hikes.

The view of higher rates has also helped lift the 2-year yield, moving it back above 4.5%, and stopped the bleeding of the dollar index. These are critical signs that the bond and currency markets are listening to what the FOMC members are saying and taking the calls for higher rates very seriously. The Fed minutes should enforce the view of the Fed officials and should only help to push the dollar and rates even higher.

This time Jay Powell will take things into his own hands and talk for an hour at the Brookings Institute on November 30, starting at 1:30 PM ET. The talk is even more critical because it will come one day before the official FOMC blackout period starts heading into the December 14 FOMC meeting. It will be Powell’s chance to make sure the market does not veer off course over those two weeks.

The Fed has been telling the market all year that it intended to raise rates aggressively and wanted financial conditions to tighten. Yes, there have been countertrend rallies along the way, but if one thing is clear, the Fed has been committed to higher rates. If the minutes do not deliver that message this week, Powell will be sure to do on November 30 what he did on August 26 at Jackson Hole, putting the hammer down on the equity market again.