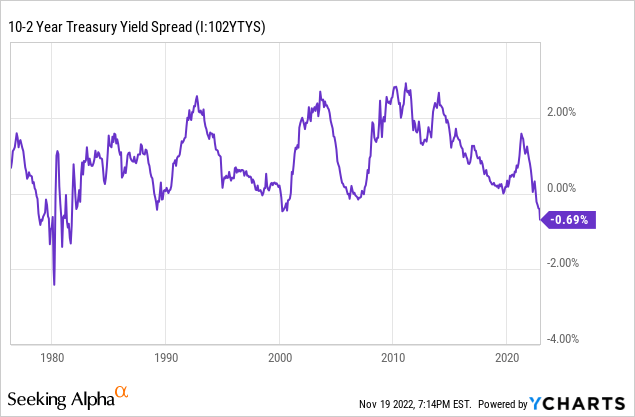 The yield curve (the differential in interest rates on the 2-year (US2Y) and 10-year (US10Y) treasury notes recently inverted to its deepest level since 1982. On top of that, the 3-month and 10-year treasury and the 18-month forward 3-month yield minus the spot 3-month yield curves are also deeply inverted. Traditionally, meaningful yield curve inversions like this have proven to be reliable recession indicators as it indicates that the market is pricing in weakening growth prospects.

In this article, we will look in more depth at what the yield curve inversion could mean for the S&P 500 (NYSEARCA:SPY) in the coming quarters and what our approach at High Yield Investor is as a result.

As you can see from the chart below, the spread between the 10 and 2-year treasury yields going negative is not common and is pretty much always followed by a recession, including the dot-com crash, the Great Recession, and the COVID-19 recessions which were all preceded by the spread shrinking rapidly and slipping into negative territory:

This makes sense and indicates the effectiveness of market forces in sending signals to capital allocators because an inverted yield curve suggests that the near-term is riskier than the long term as opposed to the normal scenario in which longer-term debt pays a higher interest rate to compensate for the higher default and inflation risk associated with lengthier maturity terms. Furthermore, in an economic expansion, investors tend to demand higher yields for longer term loans to offset the opportunity cost of investing in debt instead of equity.

Once the yield curve inverts, however, it tends to accelerate the very symptoms in the economy that it already signals, and in that sense tends to be a self-fulfilling prophecy of sorts. This is because as short-term interest rates rise, adjustable-rate mortgages become less affordable as do other forms of shorter-term debts such as credit cards, lines of credit, and automobile financing. This then leads to an increase in defaults and a decline in consumer buying power, which begins a downward spiral of rising layoffs and further defaults and declines in consumer spending. History has proven this to be the case as well.

An inverted yield curve also has an impact on corporate finances beyond consumer spending habits. For example, businesses that are exposed to unhedged floating short-term interest rates and/or have significant debt maturities coming up that they will need to refinance typically get hit hard. Meanwhile, consumer staples and healthcare businesses that have minimal exposure to short-term interest rates and/or near-term debt maturities tend go relatively unscathed by yield curve inversions. This is due to the fact that they tend to be very defensive businesses, so consumer spending is less likely to decline in these areas, even when buying power declines.

While the track record of yield curve inversions predicting serious recessions is a bit foreboding for the economy, it is not necessarily the same with the stock market. In fact, history indicates that the 12-18 months following a yield curve inversion tend to be great for the stock market with 15% increases on average over that time span. However, in the months following this one-and-a-half-year period, the market typically runs out of steam as the recession’s ferocity sets in.

What this means is that SPY is typically on borrowed time once the yield curve inverts, but traditionally it surges higher before it plunges lower (though this is not always the case). On average, the length of time from inversion to the beginning of a recession is about 15 months, while the median is 16 months and SPY tends to peak sometime in between the yield curve inverting and the recession beginning.

So, what does this mean for SPY moving forward? It means that based on historical trends, the stock market likely has at least a year of upside ahead of it before we run the risk of a serious downturn. However, many are predicting a recession to hit in early 2023 and some data even indicates that we may already be in a recession. If this is the case, then we are already in the downturn phase of the market, which certainly jives with what we have seen from the stock market year-to-date:

On top of that, there is also evidence that seems to suggest that we may be nearing a Federal Reserve policy pivot point. Most importantly, October CPI came in weaker than expected and core CPI is running at around a 5% pace. Given that the sole basis for interest rate hikes is the four-decade high inflation that we have been experiencing this year, a decelerating CPI is a very strong indicator that the Federal Reserve’s hawkish approach to monetary policy may soon be pivoting towards a more dovish one, though it is worth noting that it likely needs to fall further to really persuade the Federal Reserve, given that their long-term average annual target rate of inflation is 2%.

That said, unemployment remains persistently low, so that will likely be the other big indicator along with the CPI to keep an eye to know if the Federal Reserve is about to pivot on its monetary policy stance. The good news is that the jobs market and inflation are not entirely uncorrelated, so a rising unemployment rate will likely help cool off inflation. This should enable the Federal Reserve to pivot and help head of a major economic downturn while also propping up SPY from a precipitous decline.

However, there is no guarantee this will happen, and it is always possible that we find ourselves in a scenario where inflation remains in the 4-5% range while unemployment spikes as well, forcing the Federal Reserve to make the uncomfortable choice between fighting inflation or fighting unemployment.

If this happened, and the Fed elected to go with fighting inflation over fighting unemployment, it would mark a stark departure from past history. As Michael Darda (chief economist and market strategist at MKM Partners) recently commented:

A spin back in time shows that anytime the longer-dated curve has inverted, slower growth and Fed rate cuts have followed with no exceptions to the rule.

Given that the 2024 elections are right around the corner, the political pressure will very likely be on the side of fighting unemployment over fighting inflation, so that – combined with past history – leads us to believe that a Federal Reserve policy pivot is highly likely sometime in the next 18 months, which bodes pretty well for SPY’s prospects, since rate cuts are generally very positive for stocks.

The yield curve has inverted deeply to levels not seen in four decades. While the macroeconomic outlook is rather stormy at the moment – and it appears increasingly likely that we will see a recession sooner rather than later – the outlook for SPY is less clear. Given that SPY is currently in the fairly valued range based on a plethora of models, it would stand to reason that – barring a black swan event – investors with a long-term outlook should not be scared to continue investing right now.

That said, there really is not much margin of safety factored in either, and with the Federal Reserve not yet pivoting, there is considerable downside risk, especially for growth stocks that are particularly interest rate sensitive. Given that the SPY has become dominated with mega cap growth-oriented tech stocks over the past decade, while more inflation and recession-resistant businesses have become a relatively smaller percentage of it over that time, the SPY may still face some fierce headwinds moving forward if the Federal Reserve is unable to pivot soon.

As a result, at High Yield Investor, we have overweighted undervalued stagflation-resistant investments like midstream pipelines and other investments that will certainly get a jolt whenever the Federal Reserve pivots but are also relatively immune to short-term interest rate and recession risks.